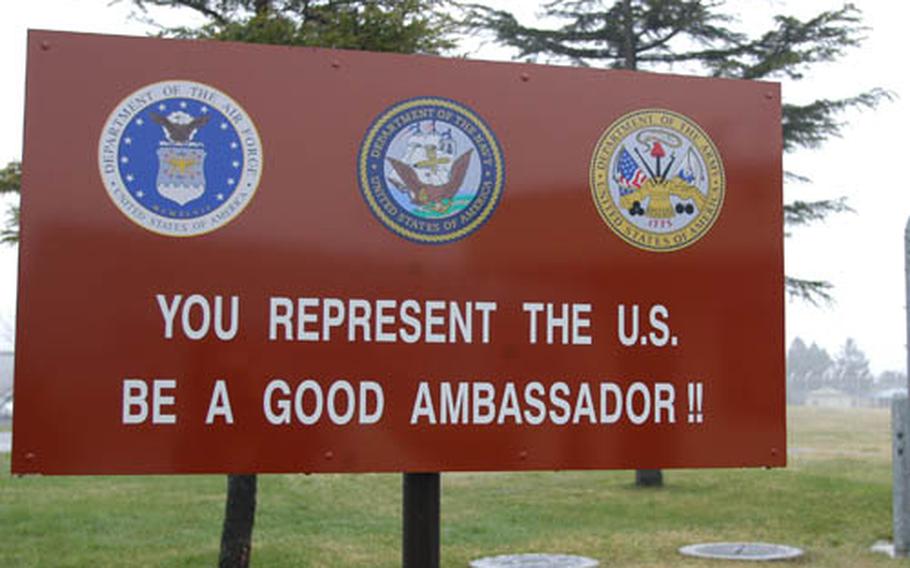 A sign put up this year inside one of the gates at Misawa Air Base, Japan, reminds base residents to be good ambassadors as they leave the base. (Jennifer H. Svan / S&S)

YOKOSUKA NAVAL BASE, Japan &#8212; What happens when a sailor in your berthing compartment threatens you with bodily harm?

While people largely know violence is wrong, the recent fatal stabbing of a taxi driver by a sailor has made &#8220;getting to the gray areas&#8221; of violence a priority for Navy leaders in Japan looking to curb violence within their ranks.

In the days leading to and following the arrest of USS Cowpens Seaman Olatunbosun Ugbogu, who admitted to stabbing 61-year-old taxi driver Masaaki Takahashi, all Yokosuka personnel were restricted from public alcohol consumption and put under a curfew. Yokosuka sailors also underwent a training stand-down focused on preventing violence.

But while the restrictions have been lifted, Kelly said, the attention to anti-violence has not abated.

All CNFJ and 7th Fleet commands were asked to review their violence prevention programs, Kelly said.

The goal of this is to &#8220;review plans and policies on violence prevention and emphasize zero tolerance for violent behavior,&#8221; 7th Fleet spokesman Chief Petty Officer Robert Garnand said in an e-mail to Stars and Stripes.

&#8220;We must reinforce a culture of prevention, response and accountability to ensure the safety, dignity and well-being of all people,&#8221; Garnand said.

There are challenges, Kelly said, as sailors may come from violent places in the United States as well as from war-torn countries where &#8220;life is next to meaningless,&#8221; Kelly said.

There&#8217;s a difference between combat readiness and violence, Kelly said.

Other bases taking notice of program

The &#8220;quick look&#8221; program at Misawa Air Base is getting noticed elsewhere in Japan.

Commanders already knew to report certain incidents to the wing commander, he said. But now that information is presented in an actual briefing, rather than just a phone call, Watts said.

Every Air Force base has a similar reporting system, he added. The level of detail in the incident reports, however, usually depends on the base commander, Watts said.