Commanders, others can ask troops about privately owned guns 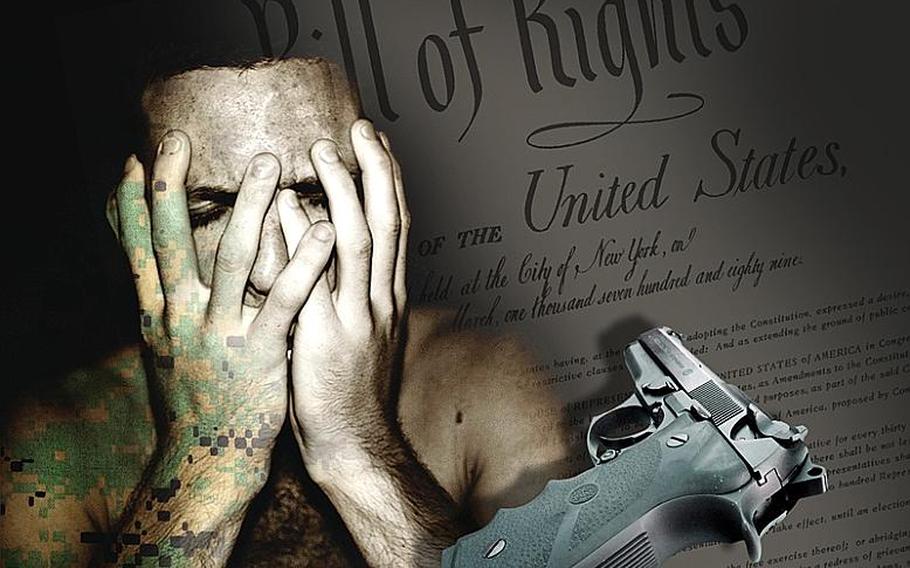 Commanders, chaplains and health professionals are now specifically authorized to ask troops they think are at risk for hurting themselves or others about privately owned firearms.

The authorization is part of the 2013 National Defense Authorization Act, which contains provisions dealing with numerous new or amended policies concerning, among other things, sexual assault, abortion, detainee operations and suicide.

The measure dealing with privately owned firearms clarifies a provision - backed by the National Rifle Association - in the 2011 Defense Authorization Act that prohibited collecting information from troops about their firearms. Some commanders and mental health professionals were concerned that it forbade inquiries about firearms, the most common and by far the most lethal method used by servicemembers to take their own lives.

The Defense Department has made little headway in reducing the suicide rate, which had been lower in the military than in the civilian population. In recent years, for unknown reasons, the rate has soared among soldiers.

The new provision also requires the Defense Department to create a position to oversee all suicide prevention programs and to create a comprehensive program for the military, instead of leaving the services to devise a mix of programs.

The 2011 measure had been criticized by suicide prevention experts and dozens of general officers, including retired Gen. Pete Chiarelli, then Army vice chief of staff. By fall, a provision to clarify the right of commanders and others to ask troops about their firearms had gained broad congressional support.

The 2013 provision was lauded by suicide experts.

"It is great that the provision now specifically allows commanders to speak with troops about their privately owned firearms, not only because it addresses language that previously had a chilling effect on potentially life-saving discussions, but also because it affirms that asking is right and responsible behavior," said Dr. Matthew Miller at the Harvard School of Public Health.

Miller, associate director of the Harvard Injury Control Research Center, whose research has demonstrated that suicide is often an impulsive act that can be prevented by making the means to commit it more difficult, also praised Chiarelli, who was among the first military leaders to speak out about the impact of firearms on military suicides. At least two year ago, he had sought to ensure that commanders could ask potentially suicidal soldiers about firearms and recommend that they remove the weapon from their home until suicidal feelings passed.

"Gen. Chiarelli has been the model of a concerned, thoughtful, data-driven leader," Miller said. "His efforts to protect his troops in this regard are as heroic and as central to his estimable leadership as what he had done to earn his four stars beforehand."

The NRA said it did not oppose the revision.