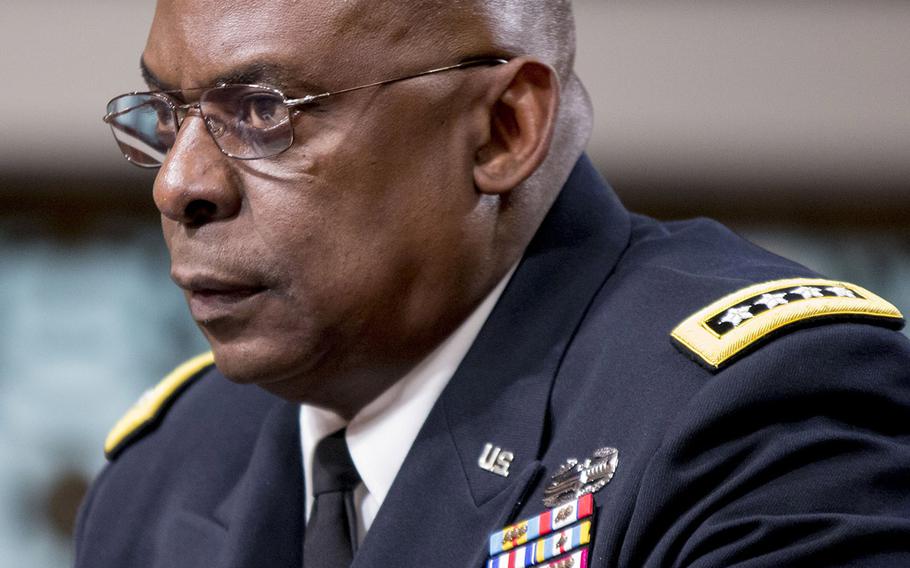 The United States must do more to blunt the spread of the Islamic State group in Libya, a “failed state” and magnet for a growing number of militants exploiting chaos, U.S. Africa Command’s Gen. David Rodriguez said Tuesday.

In Iraq and Syria, where the Islamic State group has declared a caliphate across territory it holds in both countries, additional U.S. force commitments could be required to ensure successful offensives to retake key militant strongholds, Gen. Lloyd Austin, commander of U.S. Central Command told lawmakers at the same Senate Armed Services Committee hearing.

“Yes, we as part of the international community have to do more,” Rodriguez said of the situation in Libya. The United States, concerned about the Islamic State group’s growth in Libya, is considering whether to open a new front there in the campaign against the terrorists.

Austin, Rodriguez and Gen. Joseph Votel, head of Special Operations Command, described an enemy that, under pressure on one front in Iraq and Syria, is looking to expand into another.

On Tuesday, The New York Times reported the Pentagon presented the White House with a detailed set of strike options aimed at delivering a crippling blow to Islamic State militants in Libya.

But the plan has been shelved, at least for the time being, the newspaper said, while the Obama administration pursues a diplomatic initiative to form a unity government inside Libya.

The Islamic State group in Libya “does pose a threat that merits significant scrutiny by the United States,” Cook said, adding the Pentagon has already demonstrated it is willing to target the militant group’s leaders there with airstrikes.

In Iraq and Syria, where the U.S. and coalition partners have been conducting an air campaign in support of local forces fighting the group, the Islamic State group has steadily been losing territory, becoming increasingly “less capable and increasingly demoralized and paranoid,” Austin said.

Still, the U.S. military might need to move more resources to fight on the battlefields of Iraq and Syria, where a campaign by indigenous forces to retake major Islamic State strongholds could need more backing from U.S. enablers, Austin said.

He told lawmakers that he has submitted recommendations detailing what military requirements are needed in the campaign, but hinted that more troops could be required on top of the roughly 4,000 now deployed to Iraq and Syria.

“We could develop better human intelligence. We could perhaps provide more advise and assist teams at various levels. We could increase our assistance with providing help with some logistical issues,” Austin said, adding there also is room for expanding the footprint of special operations forces.

Austin also has requested to restart a failed program to train moderate Syrian rebel troops. Last year, that training program came under fire and was abruptly terminated after failing to generate more than a few dozen trained fighters.

“I’ve asked for permission to restart the effort using a different approach,” Austin said. “The training would be shorter, but I think they would be able to greatly enable the forces.”

Austin, who is slated to retire soon after a 40-year military career, will depart CENTCOM before offensives launch on Mosul in northern Iraq and Raqqa, the Islamic State Group’s Syrian headquarters. Votel, head of SOCOM, is poised to take the helm of CENTCOM in the weeks ahead.

“As we look towards Raqqa and Mosul, clearly there will be things we want to do to increase the capability, the pace of operations and that will require some additional capability,” Austin said.

Votel said the Islamic State poses the most significant near-term threat in the region to the U.S. while Iran is a longer term challenge.

“We should understand Iran is not ambiguous in their activities and their focus on the United States,” Votel said.

In the case of Libya, which has developed into a new hub for Islamic State militants, a key obstacle to restoring order is widespread political dysfunction and lack of any credible institutions, Rodriguez said.

“Would you at this point consider Libya a failed state?” asked Sen. Lindsey Graham, R-S.C.

In Libya, U.S. officials are actively considering a more robust effort to hit Islamic State targets. Any such effort would involve other allies such as France.

There are now an estimated 5,000 Islamic State militants operating in Libya, concentrated mainly in the coastal town of Sirte.

“Libya… is part of our campaign against the [Islamic State],” Cook said. “It is not just Iraq and Syria, and we will continue to consider all options necessary to continue to address that threat.”

The United States has increased surveillance, launching occasional strike missions against high-value targets, and has quietly deployed special operators to survey the landscape and work with Libyan government partners.

Rodriguez said it would take a decade to bring order to Libya, which came apart after the fall of strongman Moammar Gadhafi in 2011, following a NATO air campaign.

“This will be a long time coming,” Rodriguez said. “It’s going to take 10 years to build that society up.”