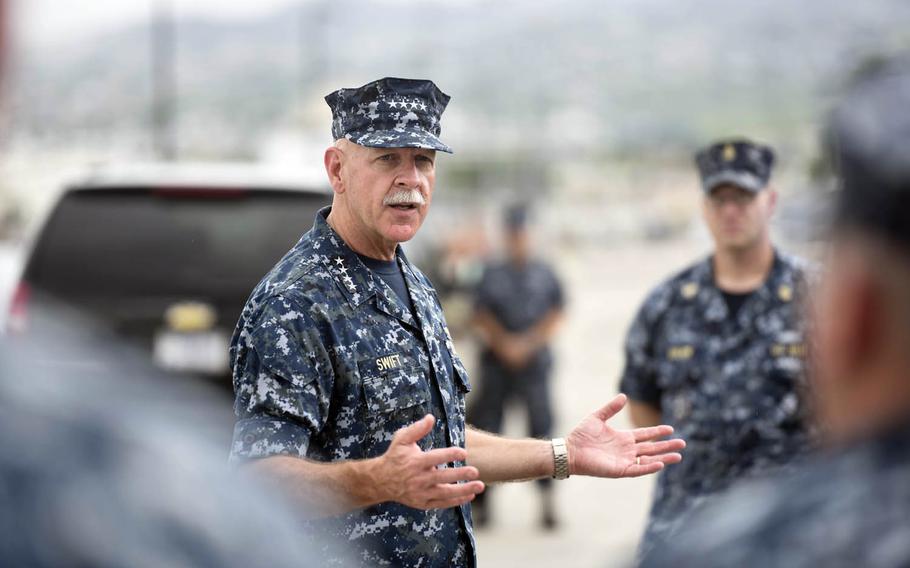 Adm. Scott Swift, U.S. Pacific Fleet commander, was among two dozen Navy leaders from around the Pacific who gathered this week in Hawaii to swap tips and brainstorm ideas on how to become a more lethal force. (Brian Wilbur/U.S. Navy)

JOINT BASE PEARL HARBOR-HICKAM, Hawaii — Two dozen Navy commanders from around the Pacific gathered in Hawaii this week to swap tips and brainstorm ideas on how to become a more lethal force.

The Pacific Warfighters Symposium, held Monday and Tuesday at the joint base, came as tensions ratcheted up between the United States and North Korea, which had threatened to launch a missile near Guam, a U.S. territory. However, the third-annual symposium is not tied to any specific nation or threat, said Cmdr. Guy Snodgrass, the forum’s director.

“Nothing is off the table,” he said. “We’re talking about everything that has to do with the Asia-Pacific.”

That includes the South China Sea, a Pacific hotspot where the Navy has been using freedom-of-navigation operations to push back against China’s claims over disputed islands there.

The 25 participants came from the breadth of the Pacific Fleet, and this year’s group included several commanders of destroyers, two from cruisers and one from a littoral combat ship, Snodgrass said. Others came from aviation — both fighters and surveillance aircraft — explosive ordnance and intelligence.

“We basically want to bring a wide cross section of people who have experience in different backgrounds,” he said. “I’m a naval aviator; I fly a plane. It’s very easy in a 20-year career to only talk to other aviators and only focus on flying planes. That’s a big blind spot. And suddenly you find yourself as a Navy captain or beyond and you’re being asked to think broadly about a lot of things the Navy does … why would I wait until the moment I walk in the door in that role to start preparing for it?”

Subject-matter experts and some senior-level commanders have joined the symposium discussion, a forum Snodgrass described as “by commanders, for commanders.” On Monday, Adm. Scott Swift told the group about the challenges he faces as the Pacific Fleet’s commander.

The symposium’s bottom line, though, is: “How can we be as lethal as possible?” Snodgrass said.

“If you’re a destroyer [commanding officer], how can you make your ship and the small group of ships you operate with as lethal as possible, given the resources you’re given?” he said.

The “secret sauce” of the symposium is helping bridge the gap between limited resources and the missions at hand and on the horizon, Snodgrass said.

“You’re never going to have enough resources to be 100-percent effective with the mission,” he said. “You have to find innovative solutions. You have to find ways to maximize the training you get.”