Commanders discover airwaves are good way to get the news out 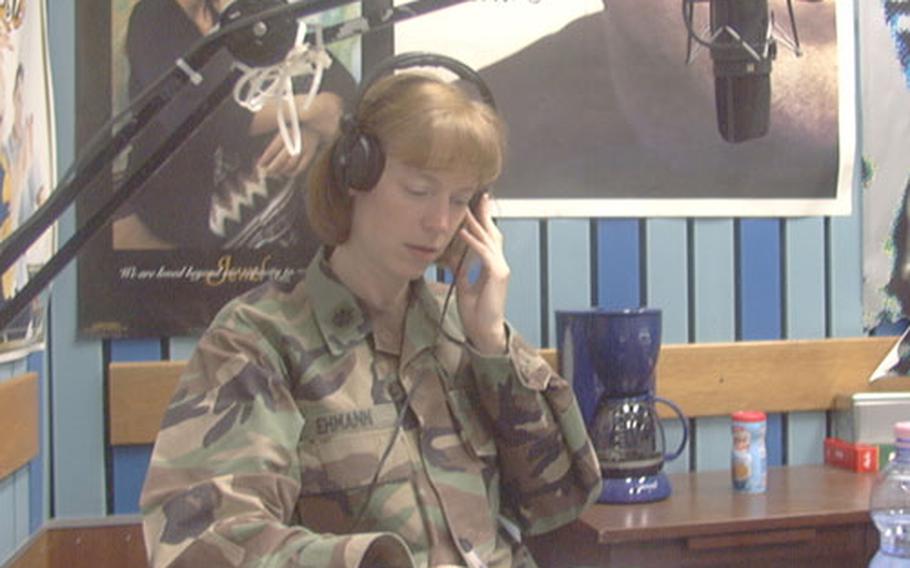 Wednesday mornings start earlier now for Lt. Col. Amy Ehmann, commander of the 414th Base Support Battalion in Hanau, Germany. As the battalion&#39;s new commander, Ehmann has assumed an unusual task for a military officer: co-hosting a weekly two-hour radio program. Originally known as "Talking Trash," the program, which airs from 7 a.m. to 9 a.m., is now called "Hanau&#39;s in the House." Hanau officials use the program to keep community residents informed and plug upcoming events, a trend that some other communities are following. (Kevin Dougherty / S&S)

FRANKFURT, Germany &#8212; Once a week, the commander of the 414th Base Support Battalion begins her workday in a soundproof room talking to no one in particular, except maybe &#8220;Snow Dog,&#8221; her sidekick.

Well, not so much anymore. Certainly not like her predecessor, Lt. Col. Jerry Mraz, affectionately dubbed the &#8220;trash man&#8221; for his campaign to rid the Hanau housing community of litter and unsightly trash stations.

When Mraz passed the guidon to Ehmann three months ago, he also passed her the microphone to his radio show, &#8220;Talking Trash.&#8221;

Like Mraz, who likewise had some initial concerns, Ehmann appreciates the opportunity to co-host a weekly two-hour show on Wednesdays, from 7 to 9 a.m., on Z-98 FM, a regional American Forces Network station.

Talk about a soapbox.

Between songs and public service announcements, Ehmann and disc jockey Jonathan Snowden will sometimes focus on a particular issue.

On this day, the commander and the Army specialist are talking about spouse and family issues facing soldiers returning from a longtime deployment. The pair also passes along community news and reminders &#8212; such as the reopening of the Hanau thrift shop &#8212; to the more than 66,000 listeners in the Frankfurt area.

Other commanders in the 104th Area Support Group are following suit.

While no other commander sits through a weekly radio show as Ehmann does, Donahue said leaders seem more willing than ever to take to the airwaves.

He attributes the growing interest to the way AFN, particularly its radio stations, uniquely filled the information void in chaotic hours following the Sept. 11, 2001, terrorist attacks. Listeners would later credit the network and its affiliates with providing valuable information specific to each command, such as base access and increased security measures.

&#8220;I think it is only going to increase,&#8221; Walkup said of the budding interest for direct command access to the airwaves. &#8220;Commanders are realizing what a wonderful resource they have at their disposal.&#8221;

The base support battalion in Wiesbaden, for instance, recently launched a Wednesday afternoon radio show called &#8220;Team 221st Hour,&#8221; which features a different guest and topic each week. Its debut coincided with the departure this spring of thousands of troops to Iraq.

&#8220;It&#8217;s a very good way to put command information out,&#8221; said Patricia Simoes, spokeswoman for the 221st BSB, which supports the division, headquartered in Wiesbaden.

While radio is the preferred medium, Walkup said some senior leaders aren&#8217;t at all camera-shy.

Navy Capt. Tim Davison in Sigonella, Sicily, is one such commander.

During anti-war protests in March, for example, Davison and his staff used the airwaves to relay information on scheduled protests, security matters and related issues, Walkup said. That came on the heels of a similar effort last winter when the Mt. Etna volcano erupted, coating the base in ash.

A commander stepping into a studio is nothing new. According to Walkup and Donahue, the difference is that more commanders are putting aside their apprehensions and stepping up to the mike.

Ehmann admitted she was unsure about taking on Mraz&#8217;s gig at first.

But Ehmann seems fairly comfortable in the studio.

Seated at a round table opposite from where Snowden sits at the controls, Ehmann works through a list of issues she wants to touch on. The walls near her are pasted with posters of musicians and Frankfurt Galaxy football team cheerleaders. Compact discs suspended from the ceiling dangle like ornaments on a Christmas tree.

Since Mraz left, Ehmann and Snowden have changed the show&#8217;s name to &#8220;Hanau&#8217;s in the House.&#8221; The house in this case is the AFN-Europe headquarters in Frankfurt, where the local AFN affiliate is collocated.

Songs by the likes of Justin Timberlake and the alternative rock group Fountains of Wayne bridged each chat session, giving Ehmann and Snowden time to prepare for the next segment. This day was especially poignant because it was the day before the second anniversary of the 9/11 terrorist attacks in the United States.

Ehmann planned to speak about the attacks and then let Snowden dispatch with a couple of community reminders.

Snowden takes the floor, but opts to go to a commercial.

Ehmann readily agreed as the second hour of her weekly show with Snowden, also known as &#8220;Snow Dog,&#8221; drew to a close.

&#8220;Talking Trash&#8221; debuted in January 2002, though at the time it didn&#8217;t have a name or regular slot. The original host was Hank Minitrez, currently the radio co-host of AFN-Europe&#8217;s &#8220;Morning Show.&#8221; Lt. Col. Jerry Mraz, the 414th BSB commander at the time, also balked about doing talk radio, but was encouraged to give it a go by Army Master Sgt. Tim Donahue, the station commander for AFN-Hessen. The weekly show began airing regularly in November 2002. Minitrez gave the program its original name, which stuck until this summer.