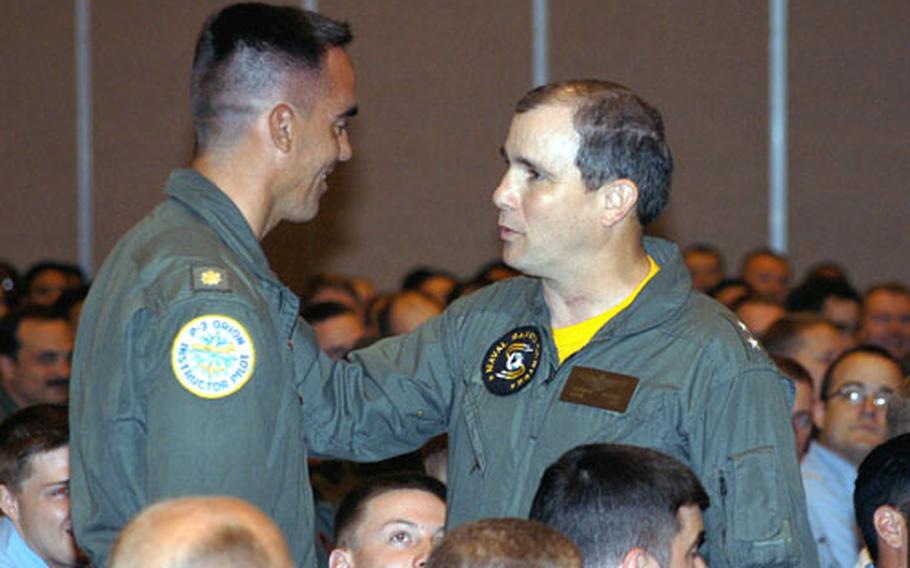 MISAWA NAVAL AIR FACILITY, Japan &#8212; Sailors can help reduce off-duty mishaps simply by looking out for each other, the commander of the Naval Safety Center told sailors here this week.

Rear Admiral Richard E. Brooks said commanders to shop supervisors and branch officers should know what their young troops are doing away from the job: Are they about to splurge on a fast motorcycle or squeeze a long road trip into too short a period?

&#8220;It&#8217;s really just kind of getting to know your people,&#8221; he said, asking questions about their weekend plans, hobbies or friends. &#8220;If people are involved in that ... and get to know what our young men and women are doing, they have a chance to influence them and maybe give them that parental type of advice.&#8221;

Brooks, a Navy aviator, was visiting with sailors and fleet leaders in Japan for the first time since taking command of the Naval Safety Center in Norfolk, Va., about a year ago.

While the Navy and Marine Corps commands are trying to meet the secretary of defense&#8217;s challenge to reduce mishaps by 50 percent over the next two years, off-duty mishaps continue to be a problem, Brooks said &#8212; specifically private motor vehicle and recreational accidents.

Balcony jumping, an activity marked by leaping from hotel balconies into swimming pools, or from balcony to balcony, is a risky off-duty recreational behavior that has cost lives, Brooks said. &#8220;We&#8217;ve lost six sailors and a couple of Marines doing that,&#8221; he said.

He told a story of a young sailor who attempted to cram an 800-mile road trip to visit family into a three-day weekend; the sailor crashed his car &#8212; but wasn&#8217;t seriously injured &#8212; on the way back to base, likely from fatigue.

Supervisors need to ask those hard questions, Brooks said: &#8220;What are your plans this weekend? Are you traveling out of the area? How far are you traveling? What kinds of things will you be involved in?&#8221;

The safety center also is looking at what the other services do to help prevent mishaps. The Army, for instance, has a computer program that assesses the risk level for certain activities, Brooks said. A soldier can map out a road trip and the computer will assign a risk; he or she can change the plan and senior leaders can offer counsel, as well, Brooks said.