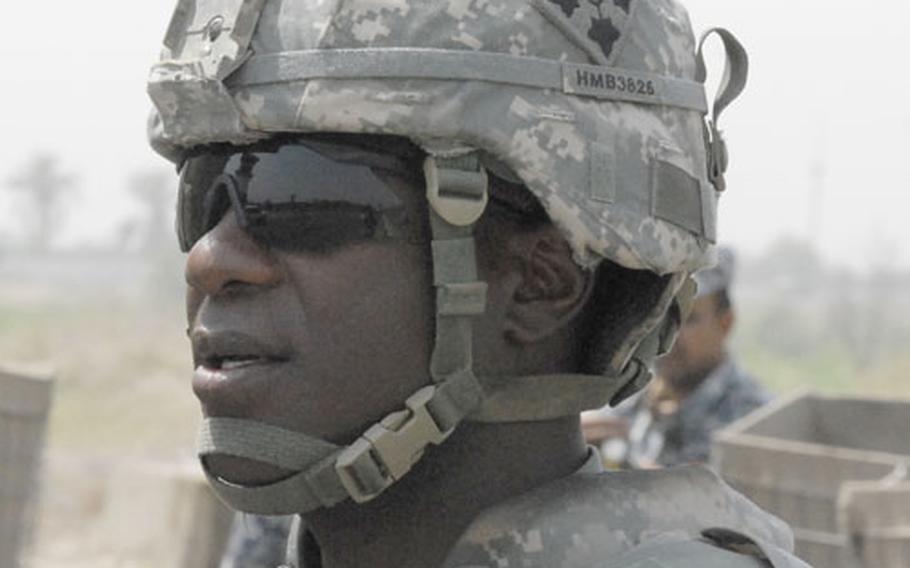 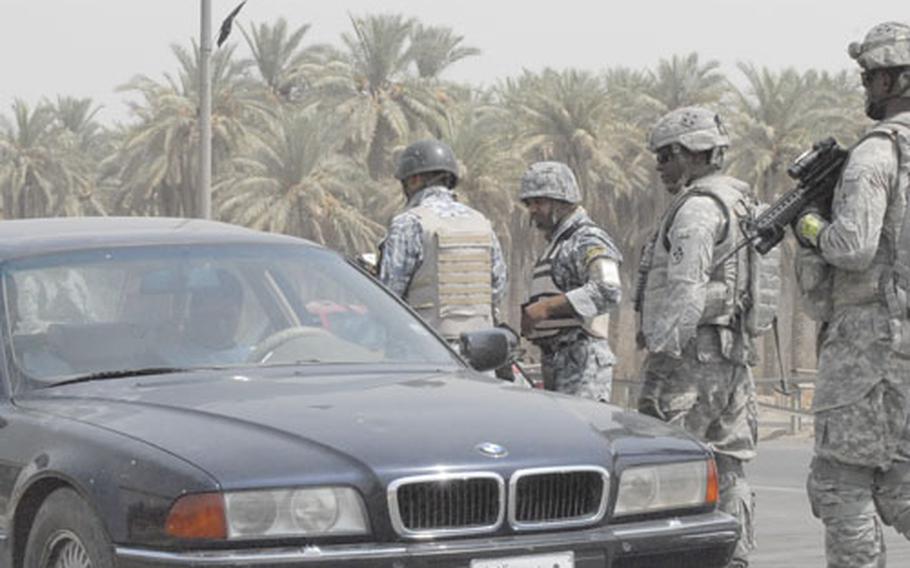 Command Sgt. Maj. Michael Bobb and other troops with the 1st Brigade, 4th Infantry Division, watch as Iraqi National Policemen search a vehicle at a security checkpoint on the Doura Highway on Sunday. (Leo Shane III/S&S)

"Often we&#8217;ll find their helmets sitting in ditches nearby," said the top enlisted soldier of the 1st Brigade, 4th Infantry Division. "One day last week, a (Iraqi) National policeman got shot in the head, wasn&#8217;t wearing his helmet. And the next day we came out and they still weren&#8217;t wearing them."

Despite months of training by coalition forces, Iraqi forces&#8217; ability to man the Rashid District&#8217;s 250-plus checkpoints efficiently and effectively is still hit or miss, according to Bobb. Some could serve as models for traffic stops anywhere in the world. Others are disorganized, simply creating traffic back-ups and not helping security.

As U.S. troops hand over more security responsibilities to Iraqi forces, and with pressure from the Iraqi government to move U.S. troops out of urban centers, such checkpoints will be one key to progress.

Bobb is quick to point out that all the security checkpoints are much more professionally run than just six months ago, when he first arrived in country.

Then, he said, Iraqi soldiers and policemen often weren&#8217;t even wearing uniforms, and neglected to stop suspicious cars speeding through their post.

Over the last few months, thanks to friendly reminders and constant check-ups from coalition troops, the security forces are slowly improving, Bobb said.

"We used to come out here and take over the post, to show them how it should be done," he said. "It was an embarrassment for them, and it made them want to shape up. And most of them did."

The Rashid District in southern Baghdad boasts more than 1.6 million people in an area the size of Orlando, Fla., and thousands of cars pass through each of the checkpoints every day.

Bobb makes a point to drive by each one at least every two weeks, stopping when he sees policemen not wearing their body armor, searching enough vehicles or doing their jobs properly.

On Sunday, he looked at about six of the checkpoints, stopping at particularly problematic areas.

"If they look like this," he said, pointing to a policeman not wearing any protective gear, "then they&#8217;re going to get shot at. We want them to be ready, we want them to have confidence, because we need them to check more vehicles."

At a later stop, in the busy Darush neighborhood where several roadside bombs have been found in the last month, Bobb&#8217;s unit found an Iraqi Army checkpoint with about 10 well-trained troops, all in perfect uniform, busy stopping and searching vehicles based on recent tips from U.S. intelligence forces.

And they all had their helmets on.