Commander to draw on lessons of the past for Afghanistan mission 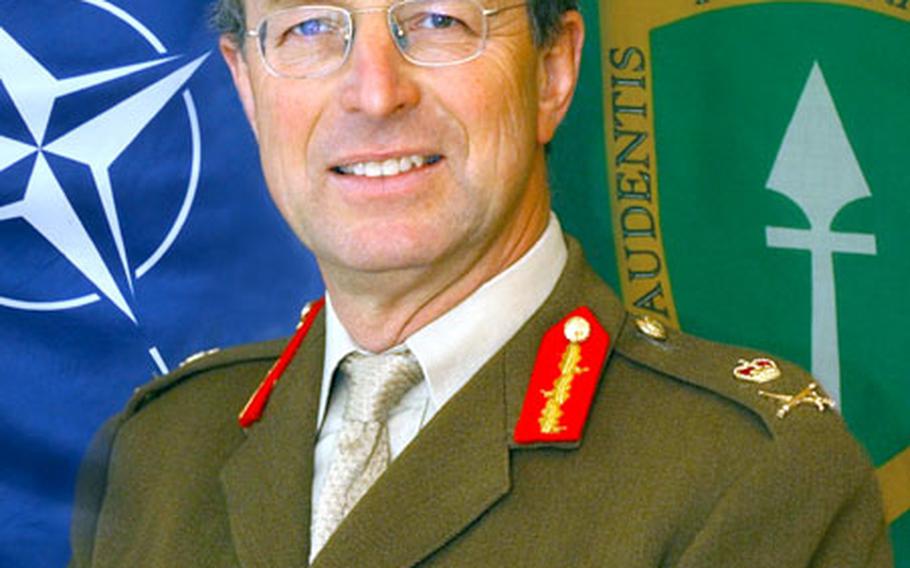 STAVANGER, Norway &#8211; British army Lt. Gen. David Richards will lead the NATO force tasked with a historic expansion of the alliance&#8217;s mission. By summer, Richards and the Allied Rapid Reaction Force could be in command of all foreign forces in Afghanistan.

Richards &#8212; known for his knowledge of military history and a veteran of operational commands in Northern Ireland, East Timor and Sierra Leone, among others &#8212; makes clear the planned divisions for troops in Afghanistan.

&#8220;We have what we in the military call a counterinsurgency role. But the intelligence-led, seek-and-destroy missions against high-value targets ... al-Qaida-type operatives, that is not something that NATO will be engaging in,&#8221; he said this week.

&#8220;Our underpinning purpose is not a counterterrorist mission, it is to extend and deepen the government of Afghanistan and to create the environment that they and the international community can build up economic development.&#8221;

One of the great challenges is tackling Afghanistan&#8217;s resurgent drug trade, which allegedly funnels funds to insurgents. Richards said NATO forces take a long-view approach and would work with Afghan security forces to persuade poppy growers to give up the drug trade.

&#8220;NATO will not get involved in poppy eradication because we are deeply cautious that if we get it wrong and create the wrong environment, we will tip otherwise perfectly law-abiding and cooperative people into the opposition&#8217;s camp.&#8221;

Richards also advocates a longer-term approach to dealing with the insurgency. In recent weeks, he said, he has been influenced by an article written by a former Indian army officer who dealt with insurgents in Kashmir, the disputed territory between India and Pakistan.

&#8220;During the first year of my counterinsurgency duties, I believe I created more insurgents than I, for want of a better word, eliminated,&#8221; Anit Mukherjee writes. &#8220;This was not only because of inexperience, but also because I lacked fundamental knowledge of the terrain, the people, the culture.&#8221;

Richards is determined not to repeat those mistakes.

&#8220;Perhaps it is not an immediate solution, but I think your best security is your population around you, who also resent the idea not only of one of our soldiers being killed but some of their family being caught up. ... It is not going to be solved overnight,&#8221; he said.