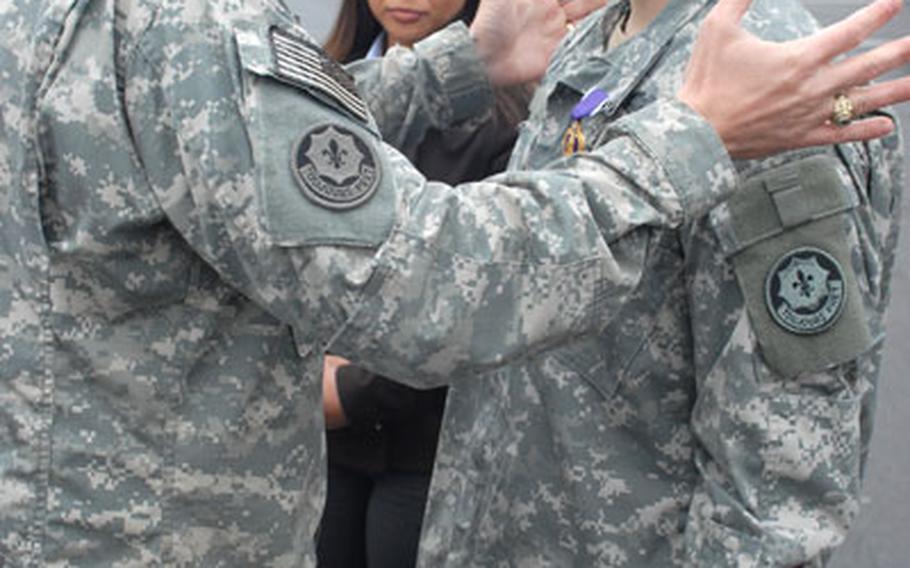 Lt. Col. Myron Reineke &#8212; who&#8217;s back in Vilseck on leave this month &#8212; spent part of Thursday morning at a Purple Heart ceremony for one of his soldiers who was injured March 7 in Iraq.

After the ceremony, Reineke talked about what his soldiers are doing in Iraq.

An Iraqi army battalion recently has moved into the 2nd Squadron&#8217;s area of operations in southern Baghdad. The battalion&#8217;s arrival meant a change of name for one of the unit&#8217;s bases &#8212; Combat Outpost Aztec &#8212; which has become Joint Security Station Karbdegla.

The base, which was an exclusively American facility, is now also home to Iraqi soldiers, he said.

&#8220;The Iraqi army battalion has had a great positive impact on security in our area of operations,&#8221; Reineke said. &#8220;It enables us to increase combat patrols. At least half of our patrols are now combined patrols.&#8221;

The presence of U.S. forces on the combined patrols lends legitimacy to the Iraqi forces, who are taking more responsibility for security in their own country, he said.

The squadron also has established a new combat outpost, COP 828, where Company F is operating in Baghdad&#8217;s Saha neighborhood.

On Thursday, Reineke presented a Purple Heart and Combat Action Badge to one of the Company F soldiers, Sgt. 1st Class Alexis Santiago. Santiago is in Vilseck recovering from wounds sustained last month when his Stryker armored personnel carrier was hit by an explosively formed penetrator while returning to COP 828 from a combat patrol.

&#8220;The last time I saw him, he was on a gurney in the (combat hospital) in Baghdad,&#8221; Reineke said before presenting Santiago the awards. &#8220;His concerns when I saw him in the CSH were not for himself. They were for the other members of his Stryker crew. He was asking about them constantly as they were wheeling him down the corridor.&#8221;

Santiago, who stood with the aid of crutches at the ceremony, said he was in a convoy of vehicles returning to the outpost when he received a radio report of men digging in a road leading to the base.

&#8220;As soon as I got hit I dropped to the ground, but I really didn&#8217;t feel any pain. The first thing that goes through your mind is family. Then you starting thinking about soldiers and making sure everybody is all right,&#8221; the 32-year-old father of two said.

The blast left Santiago, a Puerto Rican from Philadelphia, with shrapnel wounds to his buttocks and legs and a torn ligament in a knee.

With rest, he expects to make a full recovery and return to duty, he said.