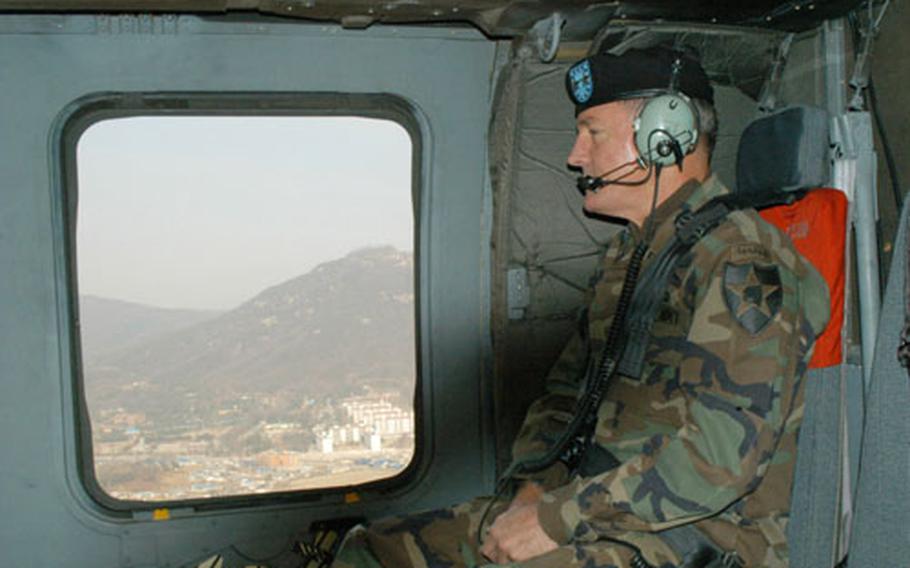 "We have over 27 training teams that have come from outside the division to train in everything from sniper operations to urban operations to medical practices to intelligence techniques. They are on the ground here now adding to the training we are doing &#8230; making conditions as relevant and as real as we can,&#8221; Wood said in his first interview since the deployment was announced late last month.

The teams are passing on the latest knowledge from the desert to soldiers from 2nd ID&#8217;s 2nd Brigade Combat Team, due to deploy to Iraq in late summer. Combat team members returned recently from block leave and are preparing for the Iraq mission at camps and training facilities all over Area I, Wood said.

The division also is using new training manuals developed specifically for Iraq to school soldiers on what to expect when they get there. The manuals focus on conditions as they exist today and the latest techniques for dealing with threats such as improvised explosive devices, Wood said.

Many of the manuals are the work of specially-fielded teams tasked to go to Iraq and capture lessons from the field, he said.

&#8220;In 32 years in the Army, I have never seen such a high quality of rapidly-developed training products available for training individual leaders to squads, platoons, companies and battalions. All of this helps us understand the conditions or experience of this theater and be able to set the conditions for our training,&#8221; he said.

The U.S. Army is learning and adapting quickly to the Iraq experience, he said.

&#8220;We are learning, not only from U.S. forces. We are also learning from the experiences of, for example, our British coalition partners,&#8221; Wood said, pointing out passages in a training manual contributed by British soldiers.

Secure and non-secure Internet sites also are a source of information about Iraq, with some training tips only days old, Wood said.

2nd ID has sought out Iraq veterans who recently transferred into the combat team unit and recorded their areas of expertise and where they served, Wood said.

&#8220;About 15 percent of soldiers in the division are veterans of Iraq. There are several soldiers who have experience in the vicinity of where we are going who can talk specifically about the community, the population and the threats they faced in this area,&#8221; he said.

2nd ID sent its own reconnaissance team to the area where the combat team will be deployed; team members have brought back more valuable knowledge about the conditions there, Wood said.

Exactly where in Iraq the 2nd Brigade Combat Team will end up still is secret, officials said. However, Wood said the area has little in common with the South Korean environment with which 2nd ID soldiers are familiar.

&#8220;The conditions in Korea are different than the conditions in Iraq but the military task and standard remain the same. It is the conditions that change dramatically, between the hills and forested slopes of Korea to the deserts and towns of Iraq,&#8221; he said.

Intense heat and the different cultural practices of an Islamic society are other changes soldiers will notice, he said. The primary threat in Iraq is the unconventional attack, whereas in South Korea the attack threat is primarily conventional, Wood said.

Troops in South Korea practice dealing with unconventional threats but &#8220;the unconventional threat is more relevant to Iraq,&#8221; he said. &#8220;There is an emphasis on very small-scale or low-level operations that we accomplish well here with the Korean conditions but we are emphasizing those specifically in Iraq for the company, platoon and squad-level missions.&#8221;

Like its destination, the exact composition of which 2nd Brigade Combat Team units will deploy is under wraps.

&#8220;The brigade is multifunctional. It can handle the full area of the missions that are required. It is constituted of combat, combat support and combat service support, which are the three major components of our military,&#8221; Wood said.

To prepare soldiers for their mission, 2nd ID is attempting to replicate in Area I the conditions its troops will face in Iraq, he said. The division is doing this in part by placing units and soldiers at South Korean locations that mirror the bases where they will establish themselves in Iraq, he said.

&#8220;The mechanics of that have a lot to do with establishing the teams as they will be positioned in Iraq &#8212; essentially where the base camps will be and how to establish the teams that work together from the various bases &#8212; the physical living setting,&#8221; he said.

2nd Brigade Combat Team soldiers are training for the typical missions they will be asked to accomplish in Iraq, Wood said. Those missions &#8220;may be slightly different or accomplished in a theater-specific way. For example, mounted patrolling along the highways, urban operations in areas in which they will be. These are missions that we are trained to accomplish but we wanted to focus specifically on them and develop additional skills,&#8221; Wood said.

Iraq-bound soldiers also will train to sharpen core military skills &#8220;in terms of rehearsal and process and frankly, intensity of marksmanship, of sustainability functions, of patrolling, of reporting,&#8221; he said.

The combat team just finished an intense training year and is well prepared for its mission in South Korea or combat missions in general, Wood said.

&#8220;The great part is we are starting very high on the learning curve, and we are able to sharpen specific skills, adapt to specific conditions and use the training products available in theater and within our Army to move to a much higher state of training readiness,&#8221; Wood said.

The 2nd ID commander said he would like to be with his soldiers in Iraq but that the mission in South Korea remains 2nd ID&#8217;s focus.

At the end of the Iraq mission, Wood said, he hopes he can look back and say the 2nd Brigade Combat Team soldiers were well trained and ready for the job at hand, their families were well cared for, they were properly equipped and they had a successful mission.