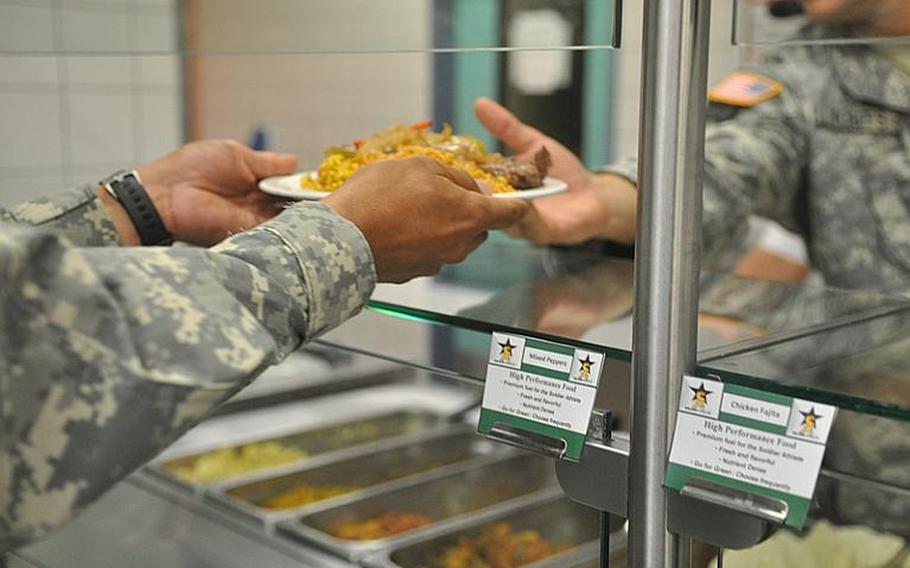 BAUMHOLDER, Germany &mdash; Since the start of the Iraq and Afghanistan wars, the number of troops who are overweight or obese has tripled, and military officials warn that the excess pounds have costly and harmful consequences for U.S. forces.

The commander of U.S. Army Europe, Lt. Gen. Mark Hertling, says the surge in the number of overweight and obese servicemembers is partly due to the military relaxing its standards over the past decade as it focused on sending troops to two war zones.

&ldquo;We have been so focused at turning units and deploying soldiers,&rdquo; he said, &ldquo;that maybe we haven&rsquo;t looked at some of the standards as we should have.&rdquo;

But Hertling hopes to place a new focus on maintaining fitness with a program that encourages healthier eating at dining facilities.

The program, under the working title of &ldquo;Fueling the Team,&rdquo; is modeled after changes he helped carry out at training bases&rsquo; dining halls after it was revealed that more recruits were having trouble meeting fitness standards because of excess weight &mdash; a legacy of childhoods with more junk food and less exercise.

About a third of American adults are considered obese, having a Body Mass Index greater than 30 (BMI is calculated using height and weight), and 18 percent of American teenagers are considered obese, according to the Centers for Disease Control and Prevention. Last year, a group of retired military leaders warned that more than a quarter of young adults, ages 17 to 24, are unfit for service because they are too fat.

&ldquo;This is a national security issue,&rdquo; Hertling said. &ldquo;We are having difficulty recruiting from the civilian population.&rdquo;

Among those already serving, according to a recent Pentagon study, the number diagnosed as obese or overweight went from about 25,000 in 2001 to more than 85,000 in 2010.

Overweight and obese servicemembers have shorter careers than their healthy counterparts, according to a June review in the Defense Department&rsquo;s Medical Monthly Report. The authors of the report dub these servicemembers &ldquo;nutritional casualties,&rdquo; who &ldquo;have large and costly impacts on the health, ﬁtness, sense of well-being, and military operational capabilities of the active force.&rdquo;

&ldquo;All of these things will contribute to our health care system, which is already in terrible shape, being under more stress,&rdquo; he said.

Musculoskeletal injuries also increase when servicemembers are overweight. Military studies have found that calcium and iron deficiencies, combined with excessive weight and a lack of weight training experience, may lead more servicememebers to suffer stress fractures.

&ldquo;Soldiers who are not eating enough protein may not rebuild enough muscle to perform,&rdquo; said Capt. Jeremy Brooks, a dietician at Landstuhl Regional Medical Center.

Eight dining facilities in Europe have already begun to be modeled after those Hertling helped establish at the training bases. Foods are labeled with traffic-light colors, with healthier items &mdash; marked in green &mdash; placed out front. Pfc. Jacob Lenicoie said the color-coding system had helped him make better choices when picking foods at the Wiesbaden Airfield&rsquo;s dining facility.

&ldquo;You grow up eating something your whole life that you think is good, and you see it with a red color and you realize it&rsquo;s not,&rdquo; he said.

Patrons also receive their vegetables first, leaving less space on their plates for less healthy choices, such as fried foods. Short-order cooking stations are closed periodically and replaced with a sandwich bar or other healthy options.

&ldquo;We are not taking away the French fries,&rdquo; said Brooks. &ldquo;But we are changing things so they may not be as easy to find.&rdquo;

Brooks said he is also working with USAREUR&rsquo;s food advisor to ensure that dining halls are stocked with leaner cuts of hamburger meat, fewer cream-based salad dressings, low-fat mayonnaise and green leafy vegetables. Some of the changes are minor, such as preparing foods with low-fat milk or using whole grain pasta and rice, but &ldquo;the benefits are very high,&rdquo; Brooks said.

&ldquo;Just like physical training is mandatory for soldiers, the nutrition part needs to be just as important,&rdquo; he said.

Several soldiers at the Wiesbaden dining facility said they appreciated having a variety of healthy dishes to choose from. In the past, there had been only one.

&ldquo;If we were on our own every day, we would always eat cheesburgers,&rdquo; said Pvt. Benjamin Hernandez.

Other said they hoped the Army wouldn&rsquo;t go overboard.

Hertling&rsquo;s staff has also reached out to officials at the Defense Commissary Agency and the Army & Air Force Exchange Service about providing nutrition information at their stores.

&ldquo;The dining facilities are the first phase,&rdquo; Brooks said, &ldquo;because we have a lot more control over that. The other agencies are a work in progress.&rdquo;

Stars and Stripes reporter Mark Patton contributed to this report.