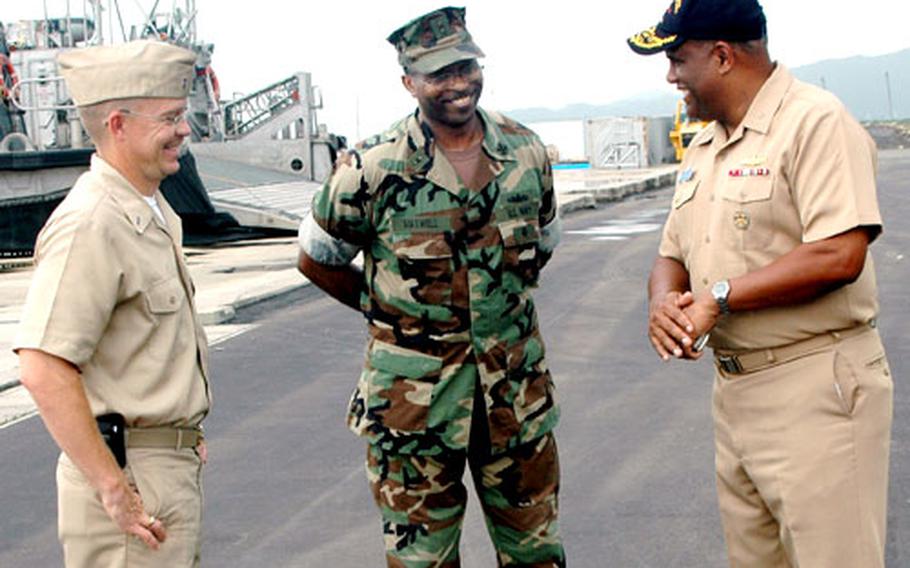 SASEBO NAVAL BASE, Japan &#8212; After Rear Adm. Victor Guillory returned to his White Beach Naval Facility headquarters in Okinawa following the 2005 Talisman Sabre exercise in Australia, one of the first items on his to-do list was coming to Sasebo.

&#8220;Since taking command last October, I&#8217;ve made it a point to visit Sasebo every opportunity I have to see the sailors and Marines that make up Amphibious Force 7th Fleet,&#8221; the admiral said.

Guillory arrived in Sasebo on Tuesday afternoon and planned to stay through Thursday. His meetings were to include one Wednesday with officers at the Sakibe Laydown Facility. Located about three miles northeast of Sasebo&#8217;s main base, it&#8217;s home to Assault Craft Unit Five, Western Pacific Detachment. It operates and maintains several Landing Craft Air Cushioned.

During the past 18 months, ships and personnel from Sasebo took part in Operations Iraqi Freedom and Enduring Freedom along with the Unified Assistance tsunami relief and several major exercises, said Lt. Edward Sisk, Amphibious Group One spokesman.

&#8220;We have to be ready when called upon to execute the mission, whether that is tsunami relief on short notice during the Christmas holiday or something of a more traditional issue involving potential conflict.&#8221;

Asked about the shore support provided by Sasebo Naval Base, Guillory called it &#8220;one of the best ports in the Western Pacific.&#8221;

&#8220;I served at Yokosuka earlier in my career as an ensign on a destroyer. Now, Yokosuka is also very nice and very close to Tokyo. But it&#8217;s large and it can be tough to be noticed.