Commander: Moving Marines to Kadena ‘not a viable option’ 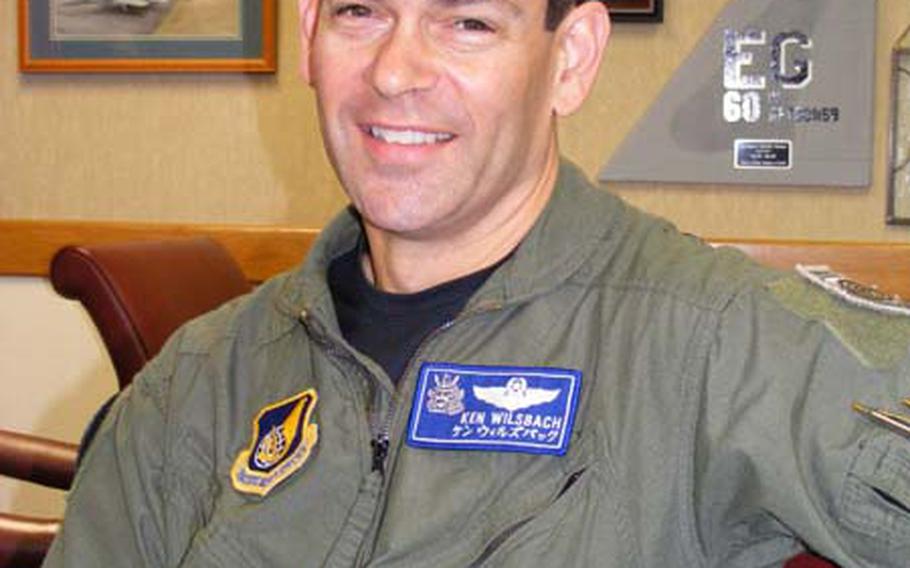 Although moving the Marines from Marine Corps Air Station Futenma to the largest U.S. air base in the Western Pacific has been suggested as an alternative to building a new air station on Camp Schwab, the installation commander, Brig. Gen. Kenneth Wilsbach, says Kadena has never been a good candidate for hosting the Marines.

&#8220;This is a tough thing to discuss publicly without getting into operational specifics,&#8221; he said during an interview with Stars and Stripes at his office Thursday. &#8220;But, believe me, there are very good operational reasons why we don&#8217;t want to bring them to Kadena.&#8221;

The idea has been suggested several times by various people over the years, most recently by Japan Foreign Minister Katsuya Okada. And it&#8217;s been rejected just as many times, Wilsbach said.

&#8220;If we did move them here, it would make accomplishing the Air Force mission &#8212; providing an unmatched combat posture in this part of the world and providing for the defense of Japan and the peace and stability of the region &#8212; much more difficult,&#8221; Wilsbach said.

One drawback would be noise, said Wilsbach, who has been working to reduce noise coming from Kadena ever since he took command of the 18th Wing in July.

&#8220;We&#8217;d have to divide the air space,&#8221; he said, explaining that the fast-moving aircraft would take the high road, so to speak, while the slower-moving Marine helicopters would be relegated to the lower skies.

Residents of towns adjacent to the base were awarded $57 million earlier this year in a noise suit brought against the Japanese government. Japan has also spent more than $1.3 billion on noise abatement measures, including soundproofing homes and businesses near the air base.

In response to Japanese press reports that said Wilsbach was open to moving some fighter aircraft training to the Japanese mainland, an 18th Wing spokesman said there has been no official proposal and the matter has not been reviewed.

Meanwhile, the center-left government of Prime Minister Yukio Hatoyama remains at loggerheads within its own ranks over the so-called Futenma Replacement issue. While Hatoyama and others in his ruling coalition want to look at alternatives that would move the Marine base outside Okinawa &#8212; if not outside Japan &#8212; others have suggested the Corps&#8217; air operations could be moved to Kadena Air Base or to Camp Schwab with a slightly altered plan.

U.S. officials contend that the move to a new facility to be built on Camp Schwab and reclaimed land in Oura Bay is the only viable option.

Some Japanese officials have suggested moving Futenma&#8217;s operations to Guam instead. But Guam Gov. Felix Camacho issued a news release Wednesday stating that although Guam is making preparations for the move of some 8,000 Marines and their families from Okinawa to his tiny island in 2014, also hosting a Marine air station is completely out of the question.

&#8220;We are already challenged with the present numbers of the relocation of 8,000 Marines,&#8221; the release stated. &#8220;Moving the entire Futenma base would not be possible due to our limited resources and capacity.&#8221;

Camacho made the remarks after meeting with Japan Defense Minister Toshimitsu Kitazawa, who was on Guam to review the project to move major Marine commands to Guam. Japan has agreed to cover some 60 percent of the cost to construct barracks and other infrastructure for the troops.

According to Camacho&#8217;s statement, Kitazawa also commented that Guam probably could not host a Marine air base. He said Kitazawa told him that the idea of moving Futenma operations to Guam was &#8220;an idea that has been presented but has yet to be addressed among the leadership in Japan.&#8221;

Hatoyama said Thursday during a news conference in Bali that he hoped to &#8220;make a decision by the end of the year on how we approach the issue,&#8221; according to a transcript.

Reports that Hatoyama would seek to meet with President Barack Obama to discuss Japan&#8217;s review of the 2006 agreement while the two attend a conference on global warming in Copenhagen next week were shot down by both governments.

Hatoyama told reporters Thursday that he had given up on the idea of such a meeting.

In Washington on Wednesday, White House Press Secretary Robert Gibbs said no such meeting is being arranged, according to a briefing transcript.

Some political observers think Hatoyama might stall on making a decision on the Futenma Relocation plan until next summer, when Upper House elections might give his Democratic Party of Japan a clear majority.