Commander gets soaked in the name of safety 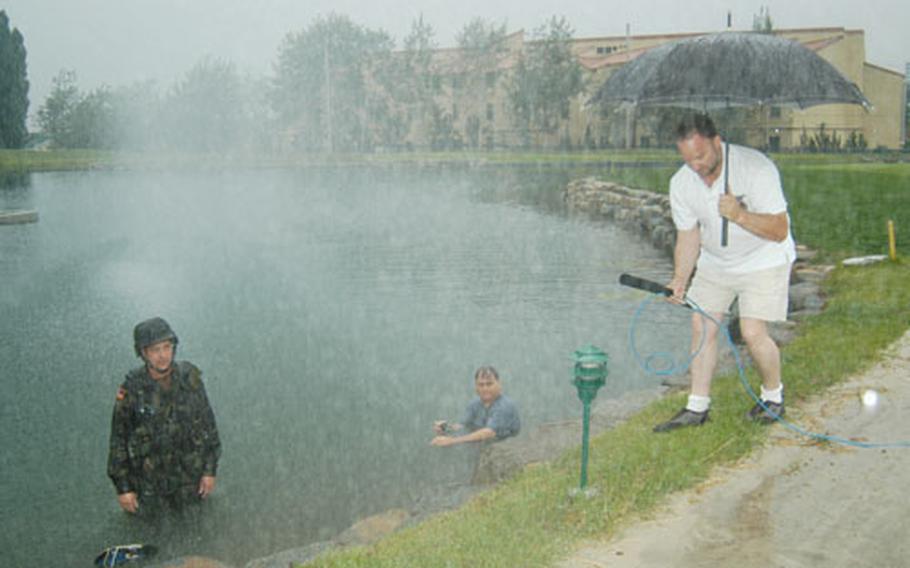 OSAN AIR BASE, South Korea &#8212; As the U.S. Army&#8217;s commander in the Taegu region of South Korea, Col. James M. &#8220;Mike&#8221; Joyner saw firsthand the killer effects of Typhoon Maemi, which killed nearly 100 people and did billions of dollars in damage in September.

It also did $4.5 million in damage to U.S. installations in the region, which the Army calls Area IV.

So Joyner, commander of the Area IV Support Activity at Camp Henry, decided to tape a public service spot for American Forces Network-Korea television. But he didn&#8217;t want it to be boring.

He also wanted to one-up his friend Col. Jeffery T. Christiansen, who commands the Area I Support Activity at Camp Red Cloud, Uijongbu. He filmed a monsoon spot for AFN last year. It featured rain.

&#8220;But unfortunately,&#8221; Joyner said, &#8220;he had picked a day that was sunny and you could see sun shining behind him. We have a great friendship and somewhat of a rivalry because we&#8217;re both area commanders, and I tried to outdo him this year,&#8221; Joyner said Thursday.

Soon Joyner and some of his staff had a plan. It called for a cast of characters from the Taegu military community &#8212; fire department, safety office, resource management directorate, public affairs, a TV crew from the AFN-Korea Taegu affiliate.

Also in the water but off camera was Joyner&#8217;s public affairs chief, Kevin B. Jackson, holding a length of fishing line rigged with &#8220;lawn debris&#8221; of the kind that goes washing down the street in a monsoon: old sneakers, a reflective jogging vest, plastic milk jug, plastic Thermos and a pair of rubber swim fins.

The fire chief sat atop a pumper and opened the valve. Within moments Joyner was doused with the first of what would be more than 1,200 gallons of water.

Looking into the camera, the mock monsoon waters pummeling his helmet, Joyner said: &#8220;Monsoons are powerful and dangerous. They don&#8217;t concern themselves with your rank. No matter where you are, you&#8217;ll get soaked and exposed to the risks of large volumes of water arriving quickly, possibly with high winds, thunder and lightning.

The spot was expected to air within days.

At one point Joyner warned about lawn debris, and that&#8217;s where Jackson&#8217;s fishing line came in.

Back in the studio, AFN added thunder sound effects to the 60-second spot, and film cuts of Typhoon Maemi.

&#8226; &#8220;First, stay out of high water collection points and away from storm drains. Also, during field training exercises, commanders should ensure troops are not in low-lying areas.&#8221;

&#8226; &#8220;Stay indoors away from windows with your blinds drawn. If a window breaks due to objects blown by the wind, the shades will protect you from shattering glass.&#8221;