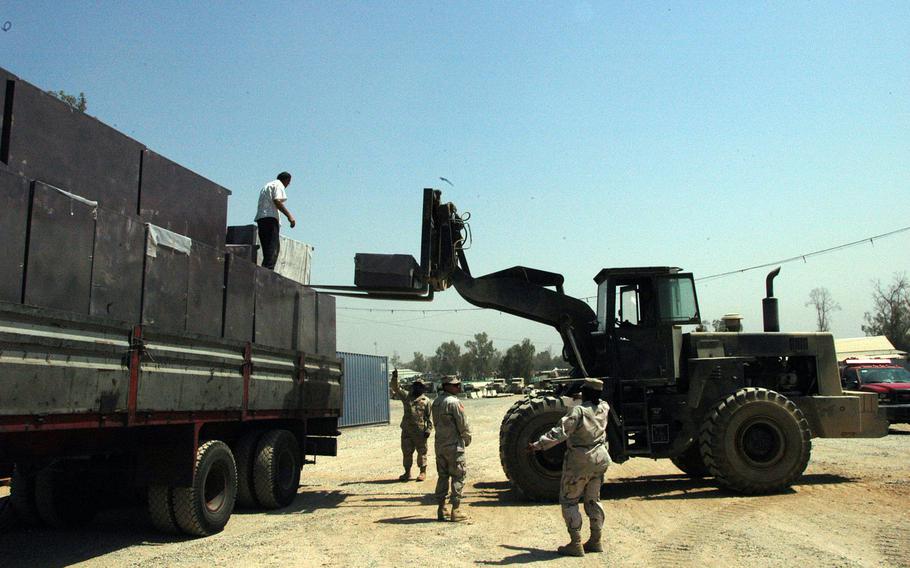 Soldiers from 94th Engineer Combat Battalion (Heavy) unload lockers from a truck at Forward Operating Base Marez, Iraq, in August 2005. The base was next to Mosul airport, which was liberated from the Islamic State group on Saturday, Feb. 25, 2017. (Stars and Stripes)

The airport, fully liberated from the Islamic State group by Iraqi security forces Saturday, was next to a large U.S. facility, Forward Operating Base Marez, during America’s occupation of Iraq, from 2003 to 2011.

In December 2004, 14 U.S. soldiers, four American contractors and four Iraqi troops were killed in a suicide bombing at the base dining hall.

New Zealand Army Brig. Gen. Hugh McAslan, deputy commander of the Combined Joint Forces Land Component Command-Operation Inherent Resolve, said in a phone interview over the weekend that Iraqi forces had cleared the final remnants of the enemy from the airport.

“The Iraqis have now established a foothold in southern Mosul. From here it will be a matter of them breaking into the city proper,” he said.

Coalition forces have been operating closer to the front lines since the offensive restarted a week ago, but there are no plans to establish a coalition base at the airport, McAslan said.

“Daesh (the Islamic State group) has degraded that facility considerably,” he said. “In terms of the coalition, we are not considering re-establishing the airport as a facility at the current time.”

McAslan declined to comment on the number of coalition soldiers operating in western Mosul or talk about their capabilities.

U.S. forces have used Qayara Airfield West, south of Mosul, since late last year. After the air base was liberated by advancing Iraqi security forces, the Air Force’s 1st Expeditionary Civil Engineer Group repaired its damaged runway, which can now handle the arrival of cargo and personnel. Meanwhile the Army’s 282nd Engineer Company reestablished hard-standing accommodation for Coalition personnel working out of the base, which the U.S. military occupied from 2003 to 2010.

There have been reports that U.S. forward observers are operating in areas where they can see their targets. Until recently the personnel, who coordinate artillery and airstrikes, had been at command posts far from the action, getting information from Iraqi forces and watching attacks unfold via drone feeds.

International troops are not right at the front line, but they are sufficiently far forward to help the Iraqi security forces implement their battle plan, McAslan said.

“The progress that the Iraqis have made over the past week is very promising,” he said. “It’s encouraging that they have got into the outskirts of the city. Based on our initial planning they are ahead of schedule.”

The Iraqis have learned from the battle they fought in east Mosul, he said.

“It’s very clear that we are overwhelming Daesh and they are under a huge amount of pressure and struggling to cope with the effects that we can bring alongside the Iraqi partners,” he said.

Iraqi forces are attacking on several axes, and the enemy is having a great deal of difficulty countering it, but the battle for Mosul is still a complex fight, he said.

“The terrain in the (western part of the) city is different to the east,” “It becomes more constraining in terms of space. You have got an enemy who had two years to prepare.”

It’s hard to say exactly how many genuine enemy fighters are left in Mosul because some of those supporting them may be coerced, McAslan said.

The enemy is attacking advancing troops with mortars and drones, and there will likely be more car bomb attacks as government forces push deeper into the city, he said.

McAslan wouldn’t speculate about the Iraqis’ postwar plan for western Mosul, but he said efforts to limit damage during fighting in the east meant schools, medical centers and essential services were being quickly restored there.

“They (Iraqi forces) have taken a great deal of care to protect that (civilian) population, and it has been at the forefront of their consideration,” he said.

“It has been a remarkable effort by the Iraqis over the past two years. The self-declared caliphate capital is on the brink of being back in Iraqi hands,” he said.

However, the liberation of Mosul will not signal the end of the Islamic State group in Iraq, McAslan said.

“There are still areas that Daesh occupy that need to be liberated. We will talk with our Iraqi partners as they transition to the plan post-Mosul,” he said.