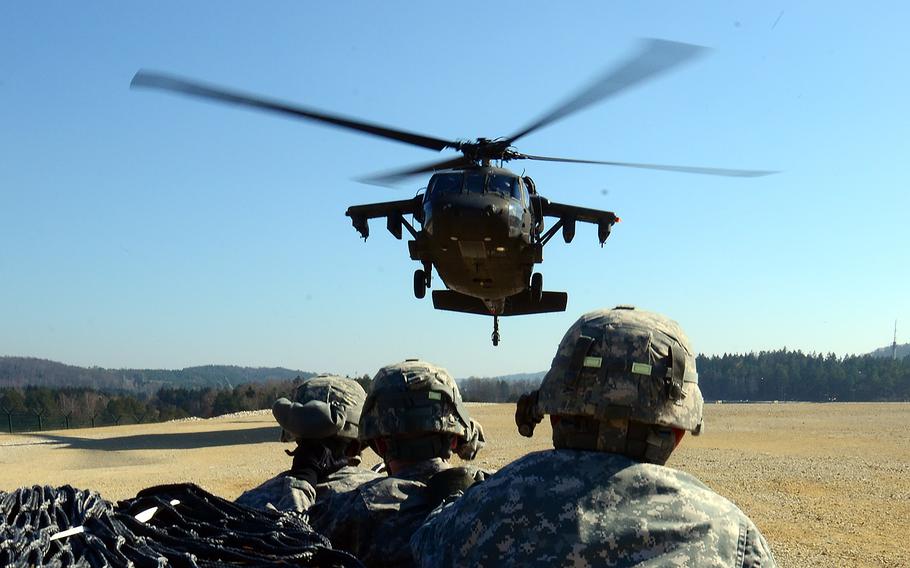 WASHINGTON — The commander of the Army’s lone Europe-based aviation brigade said the unit has struggled to overcome losing 2,500 soldiers as it attempts to train NATO forces across the continent in the wake of Russia’s aggression in Ukraine.

To bolster the U.S. mission in Europe, Col. Christopher W. Waters, whose Germany-based 12th Combat Aviation Brigade has been slashed from 4,000 soldiers to about 1,500 since the spring, said he intends to ask the Army to deploy more helicopter-flying forces on temporary rotations to help train with NATO partner countries.

“As a result of the Army’s restructuring that affected aviation, we have less capability than before, and in my assessment it’s created an aviation deficit (U.S. European Command) for rotary-wing capability,” he said. “The resulting effects of that … is that we’re having a challenging time building readiness.”

That’s a major problem for an Army tasked by its top general, Chief of Staff Gen. Mark Milley, to be ready for any potential contingency.

The 12th CAB was cut drastically under the Army’s Aviation Restructuring Initiative, a series of cost-saving measures that began in early 2014 designed to reduce more than $1 billion in spending yearly. Headquartered at Katterbach Army Airfield, Germany, the unit was slashed from the Army’s largest aviation brigade boasting seven operational battalions and about 140 helicopters to only two battalions with less than 50 choppers. Two of the unit’s battalions were moved to other locations – Fort Bragg, N.C. and Fort Wainwright, Alaska – and three were disbanded, as the Army sent their soldiers into other formations.

The combat aviation brigade is the Army’s primary formation of airlift assets. Most of them contain assault, attack, heavy lift, medical evacuation, maintenance, supply and logistics capabilities. There are 10 CABs in the active Army, down from 13 in 2014.

To offset the losses, the Army provided 12th CAB an assault battalion with 25 Black Hawks, fulfilled by continuous nine-month rotations from stateside locations. The first unit to serve a rotation – Hunter Army Airfield, Ga.-based 4th Battalion, 3rd Aviation Regiment – returned last month and was replaced by Fort Hood’s 3rd Battalion, 227th Aviation Regiment. That unit’s about 350 soldiers and 26 Black Hawks will spread across Europe, based in Germany, Romania and Latvia to support Operation Atlantic Resolve, an effort to reassure and work directly with allies concerned about Russian aggression.

But that single battalion combined with the two 12th CAB battalions is simply not enough manpower to support the mission and to allow his troops to prepare themselves for potential combat missions, Waters said.

“We are strained to train … because with the numbers of missions we are supporting and the geographical dispersion of the missions we are supporting, it is very difficult for us to build readiness in that battalion to go do its combat job,” he said, adding his unit supported nearly 50 missions this year and has already been tasked with more than 60 in 2016. “Which is why we are asking for a larger rotational element. If we get something near what we’re asking for we’ll be able to better build and sustain readiness, which is our charter.”

Through U.S. Army Europe, Waters said he will ask the Army to provide a larger assault battalion and a second attack battalion next summer, when the next rotational unit is slated to deploy from the United States. He also intends to ask for other units to deploy to provide maintenance and logistical support for the increase in helicopters and personnel.

While Waters admitted he’d like to have those units assigned directly to him, he understands the Army’s desire to rotate stateside units in and out of Europe.

“Frankly I need capability, and I don’t really care where it comes from,” he said. “So if the Army solves (the) challenges through rotational forces, that’s absolutely fine with me.”