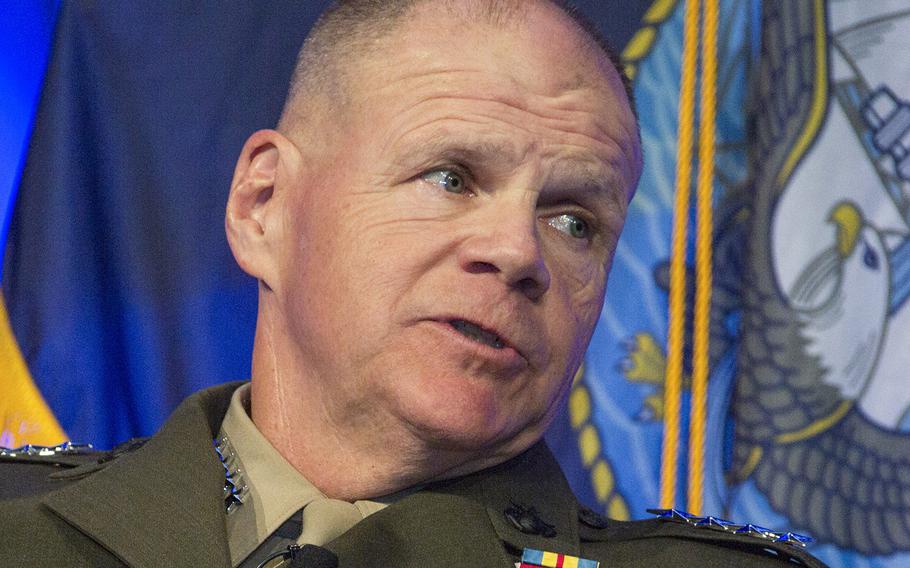 WASHINGTON – The sharing of nude photos of female Marines by active and veteran Marines on a secret social media page is “embarrassing to the Corps,” the service’s top general said in a video released Tuesday.

Gen. Robert Neller, the Marines commandant, warned “true warriors” do not engage in such activity.

“What we say and do each day represents who we are,” Neller said in the video posted on the Marines’ official website. “There is no time off for Marines. We are all-in 24/7, and if that commitment to excellence interferes with your me-time or if you can’t or are unwilling to commit to contributing 100 percent to our Corps’ warfighting ability by being a good teammate and improving cohesion and trust then I have to ask you, ‘Do you really want to be a Marine?’”

In the roughly four-minute video, the camouflage-clad Neller speaks directly into the camera, publicly addressing for the first time allegations that some Marines had secretly shared private photos – some nude -- of female Marines and personal information about the women in a Facebook group. Those allegations were brought to light over the weekend in a report by the nonprofit Center for Investigative Reporting with the War Horse military news website.

That report cited a private Facebook group entitled “Marines United” in which a secret drive had been circulated that contained the explicit photographs, dossiers on the female servicemembers and degrading comments that included apparent threats of rape, according to the report.

Defenders of the group, which according to the report had 30,000 members, have said on social media, including on Stars and Stripes Facebook page, that “Marines United” had helped veterans struggling with post-traumatic stress disorder and suicidal thoughts.

But Neller said there is no excuse for anyone involved in the scandal who “acted selfishly and unprofessionally.”

“So let me cut to the chase – when I hear allegations of Marines denigrating their fellow Marines, I don’t think such behavior is that of true warriors or warfighters,” he said.

The Naval Criminal Investigative Service has opened an investigation into the allegations and the “Marines United” Facebook page and associated photographs have been taken down, according to the Marines.

In his video, Neller encouraged anyone who believes they were victimized or subjected to harassment via social media or other forms to report those offenses, and he reminded more senior Marines to protect victims from retaliation and to “do all in your power to prevent harassment or abuse of any Marine or sailor.”

Neller has the reputation of a no-nonsense commander. In a February memorandum to the force entitle “Seize the Initiative,” he asked Marines to be “brutally honest” with themselves about their shortcomings, while encouraging them to read more, drink less alcohol and commit to being more disciplined.

He reiterated those points Tuesday in the video.

“Right now we all need to be focused on getting better, becoming more lethal and working day and night to stay ahead of potential adversaries,” Neller said. “… Not hiding on social media participating in or being aware of actions that are disrespectful and harmful to other Marines.

“It’s embarrassing to our Corps, to our families and to the nation.”