Command Sgt. Maj. Cooke mourned by unit who saw him as a father 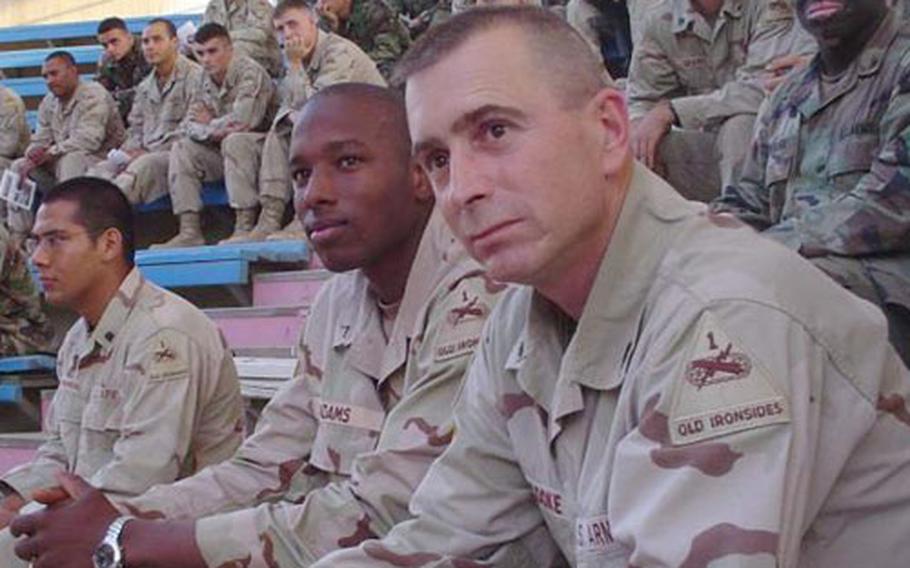 BAGHDAD &#8212; Holiday or no, in at least one way it began like every other day inside Martyrs&#8217; Monument. Command Sgt. Maj. Eric Cooke stood in the breezeway, overlooking a cluster of offices. He sipped his coffee and he thought.

Cooke had much to think about that Christmas Eve morning.

He and his soldiers of the 1st Brigade, 1st Armored Division, would roll out that night as part of Operation Iron Grip. The thunderous campaign at one point included raids, artillery assaults and a show of air power. The idea was to capture or kill the guerrillas shooting, firing rockets at, and most of all trying to blow up, soldiers and foreigners.

During the following evening and next morning, insurgents would send mortars and rockets screeching across Baghdad. Hotels, embassies, the U.S.-run compound downtown, it didn&#8217;t matter. The guerrillas would target anything with a Westerner inside.

Cooke prepared for his part in fighting this by thinking underground, beneath a titan-sized sculpture in the shape of two tears.

Normally in Friedberg, Germany, his brigade was now headquartered at a monument for Iraqis who died in the war with Iran. Cooke&#8217;s job was an important one. Cooke was the brigade&#8217;s highest-ranking enlisted soldier.

He led troops on raids and patrols, in the process dodging at least three roadside bombs. He visited remote posts to make sure troops were OK, even though he could have driven a desk. He counseled troops, but wouldn&#8217;t suffer &#8220;snot bubbling.&#8221; He made sure soldiers got their medals and he lobbied when they needed new pingpong tables.

From brass to gold

But evening and show time approached. Cooke visited Sgt. Jack Stevens in the tactical operations center. &#8220;Be safe,&#8221; he told Stevens. Cooke was the one rolling out into the night.

He stopped by Sgt. Levita Staples in personnel. There, he picked up 25 embossed command coins. He&#8217;d need them to reward any soldiers who excelled during the op. A coin from Cooke was like a dollar from Dad after a Little League home run. Soldiers said he never just gave one away on a whim; it was for a specific purpose. That alchemy turned the coins from brass to gold.

At about 8 p.m., Cooke climbed into his Humvee beside Spc. David Marklein, his driver for the mission.

They were seventh in the convoy, and together they rattled outside the wire and into the wide world, all trash-strewn and honking and perilous. Marklein thought of it as the worst big city ever, on steroids.

Within maybe 20 minutes they were in Adamiyah, a Sunni neighborhood and insurgent stronghold.

This time there was no rodent reek, at least not anymore than usual. Soldiers learn to feel the tension, the electricity that fires them into healthy fear when all isn&#8217;t right. That evening, no one felt it.

&#8220;We were just rolling along, man, and it was all good,&#8221; Marklein remembered. The Humvees rolled past a market and just began to enter a neighborhood. Then Marklein saw a &#8220;big, orange ball&#8221; and heard a distant boom, like a firecracker at the end of a long tunnel.

But the explosion wasn&#8217;t far away: It was right there.

The blast was so bright Marklein didn&#8217;t perceive brightness, just color; the sound so loud he hardly heard it.

The driver blanked out. Then, head back up, he took in the damage. Tires, flat. Steering, zero. Gas, gone.

But Marklein realized the incredible. He was fine. Somebody had detonated an artillery round maybe three meters from the Humvee &#8212; it was shredded with shrapnel &#8212; yet Marklein was in one piece. He called out to Cooke, happy they made it.

The sergeant major was silent.

The Humvees in front advanced out of the blast area, then the troops got out and came running back. Bonura, the chaplain, knew inside that Cooke was all right. Sergeant Major always was.

They talked to him in case he could hear.

Back at the base, soldiers were starting to party. A karaoke and R&B Christmas Eve. Bells dangled from the ceiling. The tree sparkled in the corner.

Then the rumor started: Sergeant Major was dead.

Stevens left the tactical operations center and told troops in the mess hall that nobody knew. Cut the gossip.

But by 10:30 p.m., Stevens and the other soldiers in the TOC knew. Cooke died before he arrived at the hospital.

For two days, the brigade made no official announcement. The next day, nobody even talked about planning the memorial. The soldiers ate a somber Christmas dinner. The chaplain went ahead with his candlelight service on peace. But for the soldiers, there was none.

Some refused to believe it. Some wouldn&#8217;t even talk. A command sergeant major from another brigade demanded to see Cooke in the morgue for himself.

And Marklein. The linebacker of a soldier couldn&#8217;t understand how he came out rosy. OK. The round detonated on the sergeant major&#8217;s side, not his.

But still. Can someone be both happy to be alive and sad that their friend is dead instead? How does that work?

One evening a few days after Cooke&#8217;s death, in one of the tents that the brigade has pitched in the hallways of the monument, some of the soldiers actually laughed. Someone told one of those jokes that people keep telling again and again, and the mere mention of the joke becomes the punch line.

It was no longer a sin to breathe.

And after awhile, they could talk about the man. How Cooke would just appear out of nowhere when you least expected it, but exactly when he needed to be there &#8212; and that could be good or bad.

Staples in personnel said he was tough, but always listened. &#8220;You didn&#8217;t have any problem whatsoever saying anything in the world to this man.&#8221;

Once, Cooke caught a soldier playing a video game on guard duty. He just looked at that young man and asked, &#8220;What did you do wrong?&#8221; That was it.

Another time soldiers were smoking cigars and playing Xbox with Cooke. Someone asked him how come a married man, all of 43 years old, had no children.

Cooke said that he did. He had a whole brigade full.

That&#8217;s what soldiers like Marklein call him, openly now, even if they never said so before. Cooke was their father. And the brigade their family.

One soldier carries around a shell casing from Cooke&#8217;s memorial gun salute. It&#8217;s already polished to a high sheen from the soldier&#8217;s pocket.

Recently, Marklein and some other soldiers engaged guerrillas in a firefight. The soldiers won. Marklein said it&#8217;s no fun to kill a man; he&#8217;d prefer the guerrillas get to rebuilding their country instead. But he said it did feel damn good to shoot back for a change.

He may not have lived to see it, but Cooke got his Christmas wish after all.