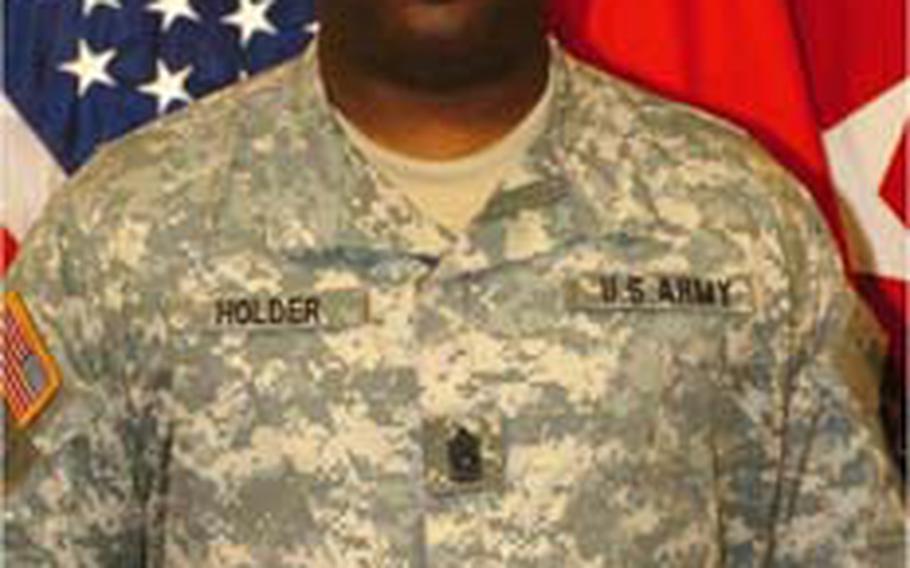 Command Sgt. Maj. Antonio Holder pleaded guilty to fraternization with a subordinate enlisted man Tuesday and was sentenced to a reduction in rank to an E-8 and a formal reprimand. (Courtesy of the U.S. Army)

CAMP CASEY, South Korea &#8212; A brief moment of sexual contact between a senior noncommissioned officer and a subordinate sent both soldiers down different roads of guilt and despair.

Command Sgt. Maj. Antonio Holder found himself ostracized by his peers, and his impressive 29-year military career tarnished as he faced a court-martial. His former driver, a specialist, said the May incident left him unable to eat or sleep normally and with scars on his arms that he attributed to self-inflicted wounds resulting from depression. He said he has repeatedly attempted suicide.

Ultimately, Holder pleaded guilty to fraternizing with a subordinate enlisted man and was sentenced to a reduction in rank to E-8 and a formal reprimand, but not before a daylong sentencing hearing Tuesday at Camp Casey that featured dramatic testimony from the two men about how their lives spiraled downward after an incident that began with a graphic sexual discussion.

Holder said, &#8220;I am truly sorry for the hurt, the shame and the embarrassment that I have brought to all. I am here today pleading guilty to take responsibility and be held accountable for my actions.&#8221;

The specialist was assigned to be Holder&#8217;s driver earlier this year when both were with the 2nd Infantry Division&#8217;s Special Troops Battalion based at Camp Red Cloud in Uijeongbu. On May 13, on a drive between Red Cloud and Yongsan Garrison, Holder said he and his driver got into a discussion &#8220;of a sexual nature.&#8221; Before Holder could go into greater detail, the judge, Lt. Col. Thomas Kulish, closed the courtroom to spectators, citing the nature of the testimony to come.

However, in his closing argument, defense attorney Capt. Tim Bilecki said that during the discussion in the vehicle between Holder and his driver, the specialist repeatedly bragged about the size of his penis.

The two men disagree about whether what happened next was invited, but Holder admitted in court that he then reached over, undid the driver&#8217;s pants, reached in and &#8220;brushed up against&#8221; the specialist&#8217;s crotch through his boxers.

&#8220;It was not done for any sexual gratification, but because I was tired of hearing about his penis,&#8221; Holder testified. &#8220;I should have just ordered him to stop talking about it. &#8230; I had a momentary lapse in judgment, and before it registered, the mistake was already made.

&#8220;This is no excuse, however,&#8221; he continued. &#8220;My actions were completely wrong. I was &#8230; the supervisor in that situation who knew better and should have never allowed the conversation to take the inappropriate turn that it did.&#8221;

Holder is married, and his wife of three years testified by telephone from her North Carolina home during the hearing in support of her husband.

Bilecki said after charges were filed against Holder, the command sergeant major was transferred to a position at Yongsan with no specific work responsibilities other than, &#8220;he wasn&#8217;t to be around soldiers.&#8221;

The specialist testified that since the incident, he&#8217;s been &#8220;paranoid. &#8230; I thought [Holder] was behind me everywhere I went.&#8221; The specialist said he has attempted suicide &#8220;several times,&#8221; but he has been reluctant to tell anyone for fear of subjecting himself to the humiliation of being put on suicide watch.

In arguing for a bad-conduct discharge, Barna said such a sentence would &#8220;send a message that the Army takes this very seriously. [Holder] has abused the trust placed in him by the Army.&#8221;

Holder said in court that he has filed for retirement, and approval was held up pending his court-martial.

His former driver said during his court appearance he is hoping for a transfer or career change that gets him back to the United States.