Command looks ahead as USAFE turns 65 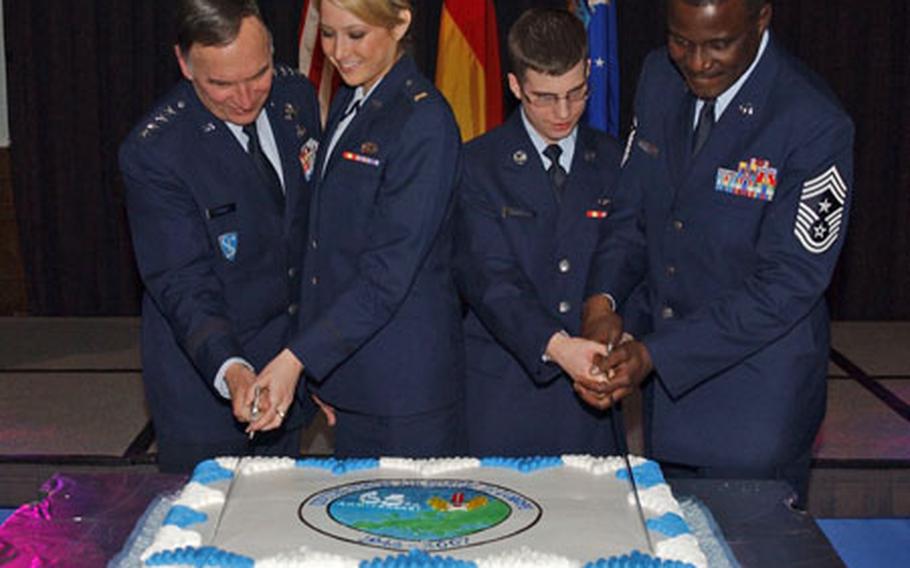 Gen. Tom Hobbins, commander U.S. Air Forces in Europe; 2nd Lt. Amanda DeLancey, a contracting officer with the 52nd Contracting Squadron at Spangdahlem Air Base; Airman Basic James Summerer, a command post controller with the 603rd Air Operations Center/Air Mobility Division at Ramstein Air Base; and Chief Master Sgt. Gary Coleman, USAFE command chief, ceremoniously cut the cake at the USAFE 65th anniversary celebration on Saturday at Ramstein Air Base in Germany. DeLancey and Summerer were chosen to participate in the cake cutting because they were the youngest officer and youngest enlisted airman at the dinner. (Courtesy of the U.S. Air Force)

RAMSTEIN AIR BASE, Germany &#8212; As U.S. Air Forces in Europe celebrates its 65th anniversary in midst of major changes, the command&#8217;s top officer predicts the service&#8217;s oldest major command will be around for decades to come.

Even with the introduction of more technology and long-range aircraft, there will continue to be a need for a significant presence in Europe, Gen. Tom Hobbins said.

&#8220;I think that there will always be an Army, Navy, Marine and Air Force component to an overall combatant command,&#8221; said Hobbins, who is one of 12 four-star officers in the Air Force.

He added that a command also would be needed to continue good relations with European allies.

The Air Force&#8217;s top command in Europe, which oversees 41,000 active-duty, Reserve and civilian personnel, marked its birthday with a formal dinner and band concert on Thursday at the Officers&#8217; Club at Ramstein Air Base. The U.S. military&#8217;s largest base in Europe is home to the command&#8217;s headquarters, known as USAFE for short.

German politicians and civic leaders attended the anniversary gala, which included a slide show chronicling USAFE&#8217;s history over more than six decades and musical performances by the command&#8217;s band.

Alfred Hoffman Jr., who is the U.S. ambassador to Portugal, served as the command&#8217;s special guest for the evening. Hoffman, a former Air Force fighter pilot who flew F-100s, was stationed at Ramstein Air Base 50 years ago this month. He said much has changed over the years.

The command is considerably smaller today, flying about 220 aircraft and operating five main bases in Europe.

As the U.S. military shifts thousands of forces from overseas bases back to the United States, the Air Force is expected to reduce its number of airmen in Europe slightly over the next couple of years.

Other services will probably share the use of the base in the next 50 years with the formation of a new Africa Command and the arrival of new aircraft such as the C-130J transport plane.

1973:USAFE headquarters moved from Lindsey Air Station in Wiesbaden, West Germany, to its present location at Ramstein Air Base, Germany.

Late 1990:Moved more than 180 aircraft and 5,400 people to the Persian Gulf area in support of operations Desert Shield and Desert Storm. More than 3,000 patients treated at USAFE medical facilities during the war.

1995:Provided air protection over Bosnia-Herzegovina along with allies from NATO.

1999:Contributed forces to NATO-led air war over Kosovo, leading to the removal of Serb forces.

2001:Helped deliver 3,300 tons of humanitarian daily rations to northern Afghanistan, opened a base in Kyrgyzstan.

Today:Continues to support operations in Iraq and Afghanistan. Engaged in numerous U.S. military exercises and military-to-military programs in Africa and the former Eastern bloc. Command consists of 41,000 active-duty, Reserve and civilian employees assigned to five main operating bases and 80 other locations. USAFE includes about 220 fighter, attack, tanker and transport aircraft.