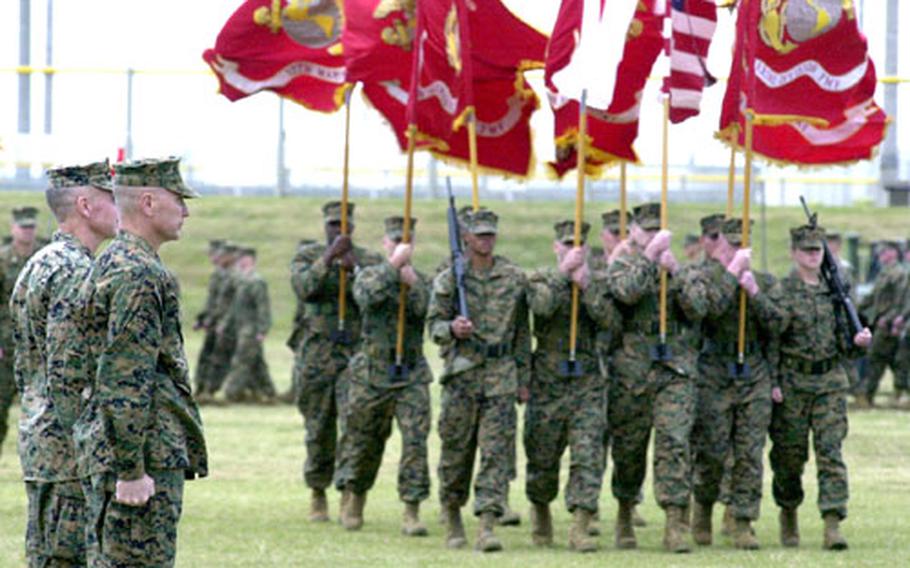 Brig. Gens. Christian Cowdrey, left, and Mastin Robeson stand at attention during a pass in review at their 3rd Marine Division change of command ceremony on Camp Hansen on Wednesday. Cowdrey turned over command of the division to Robeson. (Fred Zimmerman / S&S)

Brig. Gen. Mastin Robeson assumed command of the division from the outgoing commanding general, Brig. Gen. Christian Cowdrey, during a ceremony on the parade field here. In addition to taking on his new command, Marine officials said Robeson will still continue to serve as the commanding general of the 3rd Marine Expeditionary Brigade. Cowdrey said during the ceremony that he will retire at a later date &#8220;with my family by my side, back in the States.&#8221;

After the ritualistic passing of a Marine Corps flag from Cowdrey to Robeson, which signifies the passing of command, speeches were made by both men and one guest, Lt. Gen. Joseph Weber, the III Marine Expeditionary Force&#8217;s commanding general. Weber addressed the audience and talked about both men.

Weber told the audience that the 3rd Marine Division is the most unique division in the Marine Corps, as it comprises Marines from both coasts of the United States and Hawaii. He then said he was there to publicly recognize both men.

&#8220;I want to say goodbye and publicly thank one of our great general officers, and welcome another,&#8221; he said. Weber went on to thank Cowdrey for his leadership, loyalty and flexibility. He then joked with Robeson, saying he wished everything could be as well planned and go as scheduled for the division, &#8220;But welcome aboard &#8230; I can&#8217;t fix it.&#8221;

Cowdrey then told the audience how proud he was to be at the division helm.

&#8220;Command is a privilege, and you&#8217;re honored when you get the opportunity to command &#8212; I&#8217;ve been honored to command the 3rd Marine Division,&#8221; said Cowdrey, who will be retiring after more than 32 years of service. He then added that the division, which is currently about 7,000 strong, is engaged in the global war on terrorism like other Marine divisions, noting that in the last year, the division has suffered more than 400 combat casualties.

Cowdrey then turned his attention to Robeson: &#8220;I couldn&#8217;t think of a better gentlemen to follow me and take this division, this great group of Marines and sailors.&#8221;

Robeson was the last speaker of the day and told the troops the ceremony wasn&#8217;t about the two general officers, but about them because their leaders are there to support them. He ended his speech by telling the division troops, &#8220;Continue what you&#8217;re doing, because you&#8217;re doing it well.&#8221;