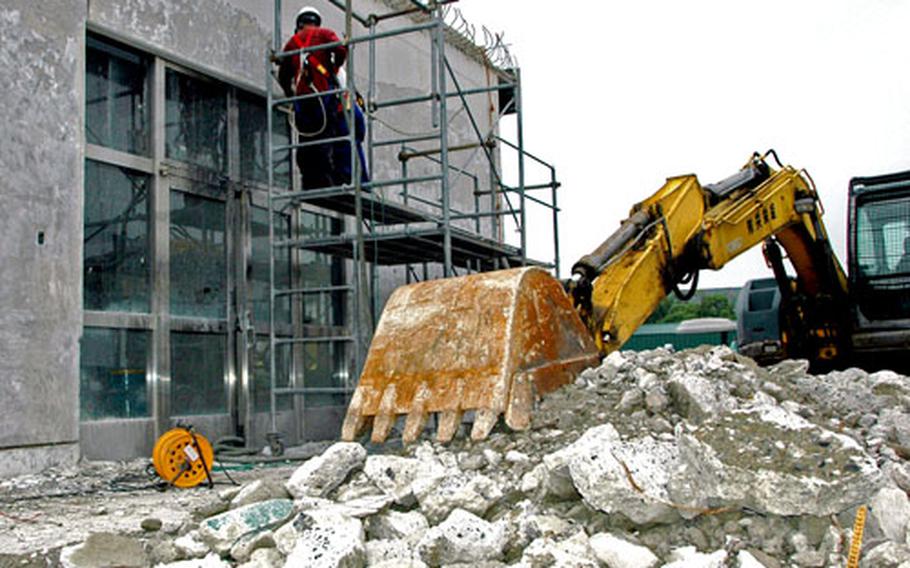 Construction workers demolish the front entrance of the Showboat Theater at Sasebo Naval Base on Monday in preparation for a $300,000 expansion and renovation designed to create more snack bar space and a more efficient flow for ticket purchases. (Greg Tyler / S&S)

SASEBO NAVAL BASE, Japan &#8212; The Morale, Welfare and Recreation department here is spending more than $425,000 to bring the main base&#8217;s Showboat Theater up to current stateside movie theater standards.

This week through August, construction workers are demolishing the front entrance of the facility and pulling out walls and equipment in the snack bar and lobby to make way for improvements.

This phase of the renovations also will add an external ticket window with an awning and the front of the facility will be extended to make way for a roomier snack bar and lobby. Theater manager John Stemen said drink dispensers, the popcorn machine and other gear will be replaced by up-to-date equipment.

An earlier phase of the renovation project, which added wider seats with cupholders and a fresh coat of paint, was completed last September at a cost of more than $100,000, Wagner said.

Stemen said he looks forward to the end of October, when all renovations are projected to be complete.

MWR is trying to keep the theater open as much as possible during construction, Wagner said, but some closures may be necessary. The theater&#8217;s showtimes and scheduled closures are announced on AFN Thunder Radio 1575 AM, the base paper, fliers and on the electric sign in front of the theater. The Showboat Theater can be reached at DSN 252-3822.