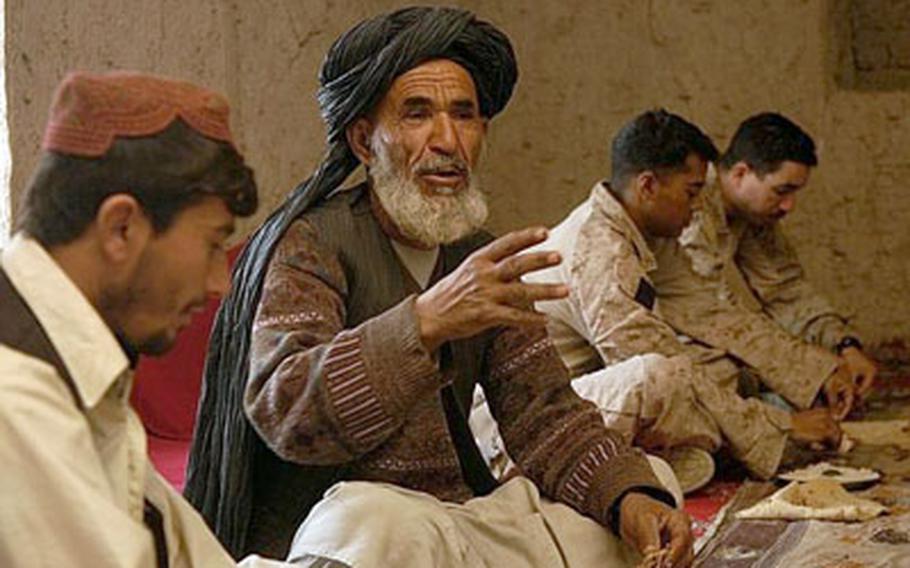 Buy Photo
Sarwar Khan, a village elder in southern Nawa, talks with Marines about the upcoming military offensive. The military operation is the subject of much speculation in the towns that surround Marjeh. And there are indications that some Taliban are hiding out in small villages in places such as Narwa. (John Vandiver/Stars and Stripes)

Buy Photo
Sarwar Khan, a village elder in southern Nawa, talks with Marines about the upcoming military offensive. The military operation is the subject of much speculation in the towns that surround Marjeh. And there are indications that some Taliban are hiding out in small villages in places such as Narwa. (John Vandiver/Stars and Stripes) 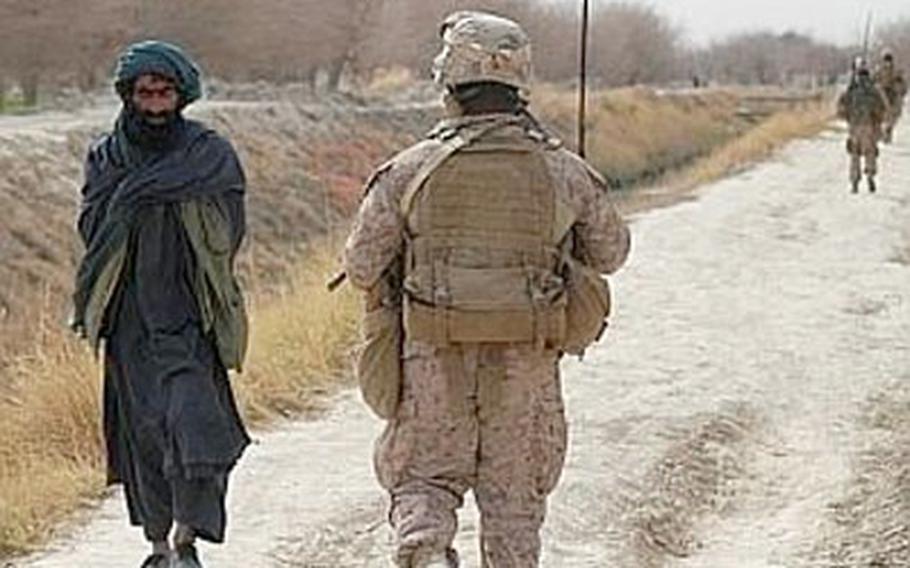 In Nawa, Marines say they&#39;re prepared for an increase in violence if insurgents holed up in Marjeh disperse to surrounding towns. The Marines are hoping their increased numbers will leave the enemy with fewer opportunities to intimidate the local population. () 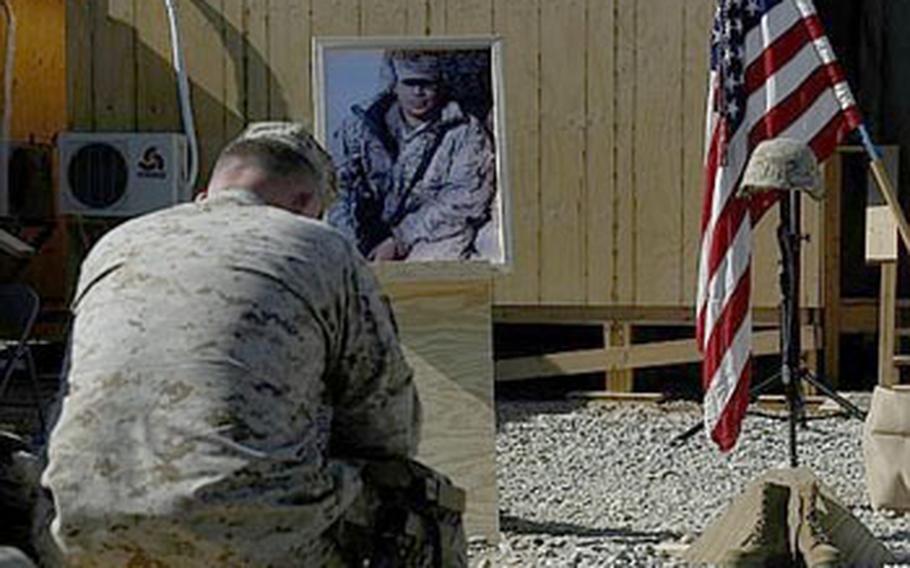 Gen. Larry Nicholson, commander of Marine Expeditionary Brigade-Afghanistan, mourns during a memorial for a Marine killed earlier this month in Helmand province. Lance. Cpl. Mark Juarez was killed Jan. 9, marking the second KIA for the 1st Battalion, 3rd Marines since they arrived in Nawa in December. ()

NAWA, Afghanistan &#8212; Meeting with village elders in central Helmand province, Marine Capt. Steve Karabin had much business to discuss. There was a long list of redevelopment projects to be planned, and U.S. dollars to be doled out for Afghan wish lists that included new bridges and canal clearings.

But first, Sarwar Khan, the local elder, was curious about another matter: the coalition offensive everyone in Helmand province knows is coming.

&#8220;What is happening in Marjeh?&#8221; asked Khan, referring to a nearby Taliban stronghold that the Marines will soon attempt to take apart in a long-planned operation.

In Helmand province, the city of Marjeh and the looming Marine invasion there is on everyone&#8217;s lips. With more troops on the way, Marines hope to finally make inroads in a part of the province that has been off-limits because of insufficient troop numbers. The city is a safe haven where the Taliban can plan attacks in surrounding areas. Marjeh also is flush with poppy fields and opium, which helps finance the insurgency.

Although the first shot has yet to be fired in this much-advertised operation, there are indications that Taliban members are slipping into neighboring districts, seeking to reverse the security gains Marines have achieved in recent months.

In some cases, the Taliban are kidnapping locals and taking them to Marjeh &#8212; possibly to punish them for cooperating with the coalition and local authorities &#8212; and in other cases they are taking refuge in local neighborhoods, according to some Afghan security officials.

Baker has lost two of his Marines to violence this month in Nawa district, an area about seven miles northwest of Marjeh. A British journalist also was killed earlier this month and several other Marines were seriously injured when their Mine Resistant Ambush Protected vehicle traveling in the northern part of the district hit a roadside bomb.

As some Marines gird for battle in Marjeh, other Marines working in surrounding districts like Nawa, which has experienced some of the largest security gains in Helmand since Marines first arrived here last spring, hope the improvements they have witnessed won&#8217;t be reversed.

Meanwhile, police and village leaders have said some Taliban members from Marjeh are taking up residence in their villages, but their intentions are unclear.

Others say there could be a rise in roadside bombs incidents, but they don&#8217;t expect the insurgents to directly challenge U.S. forces. Most of the local population is opposed to the Taliban, said Mohammad Began, a local elder.

&#8220;Maybe they come here and place mines in the ground, but they cannot stay here for fighting,&#8221; Began said.

On Wednesday, the district governor of Nawa, Abdul Manaf, said the Taliban continues efforts to intimidate the population. A message posted at a local mosque a night earlier threatened that revenge if residents work with the Americans, the local government or Afghan security forces.

&#8220;They are working very hard to turn the people against us. But I don&#8217;t think it will work,&#8221; Manaf said. &#8220;The people have promised us they will not let that happen. The security here, the projects, the jobs makes it harder for the Taliban to influence people. The only thing they can do is come in the night and put mines someplace.&#8221;

But for the Americans, the potential for more bombs is the gravest of threats.

Karabin, the company commander for 1-3 in southern Nawa, says he&#8217;s getting his Marines ready for any potential ripple from Marjeh.

&#8220;We&#8217;re preparing for any possible increase in enemy activity, but with our focus on population, the people are telling us if the bad guys are out there. And I think that will happen if the enemy does try to use this area,&#8221; Karabin said.