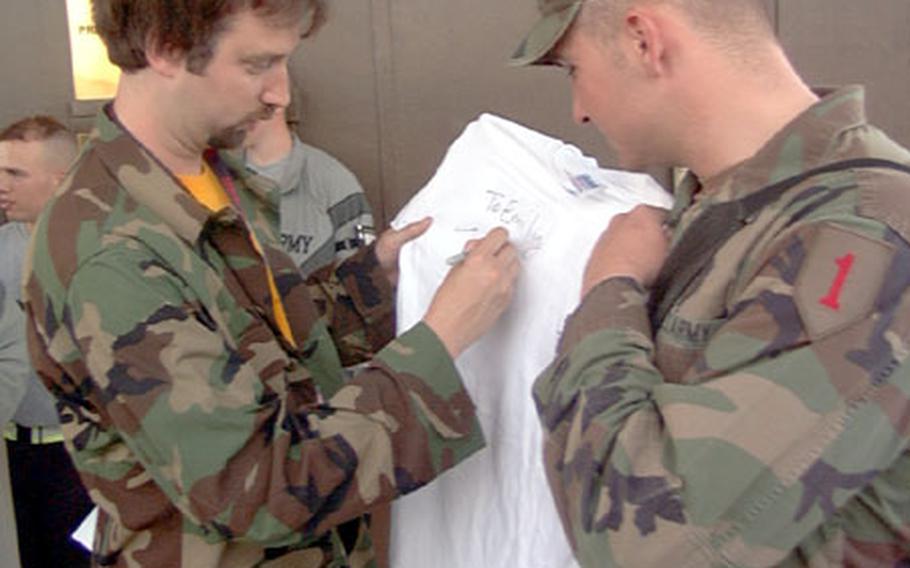 Comedian Tom Green signs an autograph for a 1st Infantry Division soldier at Camp Bondsteel, Kosovo, on Friday. Geen, known for his antics on his own MTV show, is on a weeklong tour of the Balkans through the United Service Organizations. (Petrit Qorrolli / S&S)

CAMP BONDSTEEL, Kosovo &#8212; The gaggle of soldiers waited in front of the mess hall, pondering that most open-ended of questions: Where is Tom Green?

There were theories. The famed MTV master of the gross-out gag was to have shown up a half-hour earlier to sign autographs and discuss world affairs with young people carrying M-16s. One guess was that in true Tom Green fashion, the comedian had done something loony and was now in the loving embrace of the MPs.

Then he appeared over the dusty plain, camouflaged jacket flapping in the distance, extremities apparently shackle-free.

&#8220;How many months have you been here?&#8221; Green asked the troops. They tried to answer with their time spent in now-arid Kosovo.

Green and his crew had spent four days in Kosovo chatting with troops and taping &#8220;Hi Moms&#8221; for his new talk show, which is planned to debut on MTV on June 23. On Friday evening, he made his final stop in the Balkans to give troops a chance to trade barbs and pose for snapshots with the goateed yuckster.

Apparently, his tardiness was entirely justified. Green had taken a military shuttle bus out for a spin, which of course resulted in a requisite game of chicken with another bus.

He also bonded with troops.

&#8220;Someone demonstrated a choke-hold on him,&#8221; offered Tracy Thede, tour producer for the United Service Organizations&#8217; world headquarters.

About then, Green posed for a picture with a female soldier who seemed a little taken with him.

In person, Green is full of goofy remarks, but surprisingly restrained for a man whose bits have included swinging a baby from its umbilical cord in the movie &#8220;Freddy Got Fingered.&#8221;

It turns out the whole military scene was not so new to Green. A Canadian, part of his childhood was spent on military bases up north. His officer father also served in Vietnam and on Cyprus.

Green will visit Rhein-Main Air Base on Sunday. Among his stops will be the air terminal and the base exchange.