Comic’s by-the-book act has caught on at Yokosuka 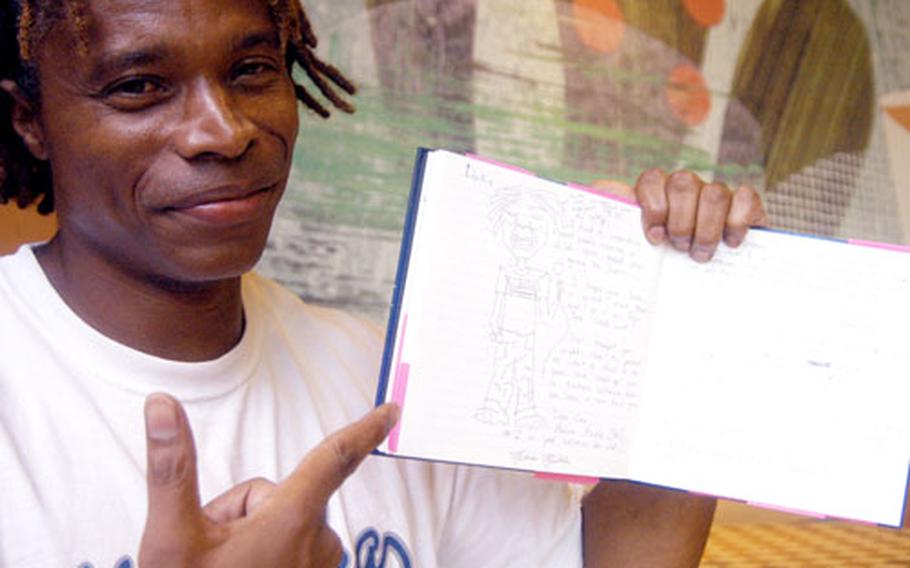 Folks ask for comedian Duke Alexander’s autograph, so he asks for theirs in return. The Yokosuka-based substitute teacher, coach and stand-up has collected signatures for over a year and reads them before every gig “to reassure myself that I’m funny.” (Allison Batdorff / S&S)

YOKOSUKA NAVAL BASE, Japan &#8212; If you ask Duke Alexander for his autograph, prepare to give yours up, too.

The 46-year-old stand-up comic takes his &#8220;magic book&#8221; to every gig and after a year, his fans have filled it with messages and pictures.

&#8220;Ichiban!&#8221; says one. Army specialist Andy Cornejo sends &#8220;love, peace and chicken grease.&#8221; Some entries include drawings of the Yokosuka-based comedian. Others are written in Japanese.

He&#8217;s reached out professionally with humor for 15 years. The substitute teacher and assistant Nile C. Kinnick High School wrestling coach draws his material from real life. He talks about everything from picking up pet doody (&#8220;Dogs make us do the biggest trick of all&#8221;) to the misfortune of having a birthday three days before Christmas. (&#8220;I always knew what I was going to get for my birthday &#8212; one shoe&#8221;).

Working on a military base in Japan is joke fodder too, as he&#8217;s added hand-me-down cars, sumo wrestlers and ninja vending machines into the mix.

But unlike some other comedians, Alexander won&#8217;t laugh at you, only with you.

Alexander&#8217;s comic career began early. Laughter was a way to cope with the hardship of growing up in rural Oklahoma with 11 siblings and a single mom, he said.

He later moved to Los Angeles. There, he said, he started running marathons &#8212; he has run nine to date &#8212; and got a brush with the big time with his stand-up routine.

Now, Alexander is making it his goal to entertain at every military base in the Pacific. He also has his sights set on performing for the president of the United States.

But if the audience thinks they&#8217;re getting the lion&#8217;s share of the benefit from his act, the joke is on them, he said: He says gets more out of performing than anyone.

&#8220;The audience, the people I meet, are my soul,&#8221; Alexander said. &#8220;My biggest motivator is a book I&#8217;ve carried to all my shows, in the last year, that is signed (and continues to be signed) by my fans and audiences, with well wishes and the impression my comedy has left upon them. Little do they know that it is me who has imprints of their souls on my heart.&#8221;

Alexander is to perform at 7:30 p.m. July 14 at the Silver Dollar Saloon in the Chief Petty Officer&#8217;s Club. The $3 cover charge includes a free drink.