Comedic hypnotist tricks Sasebo sailors into having a good time 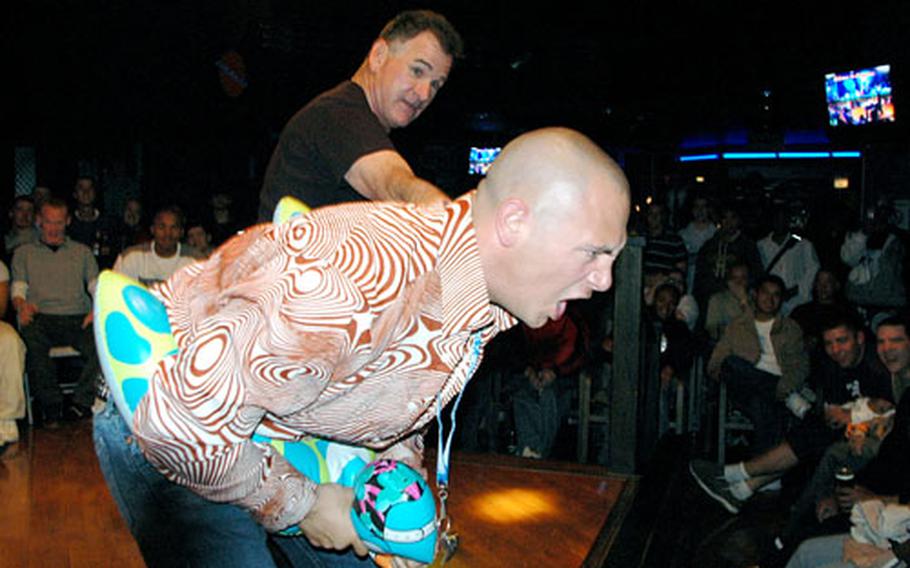 Hypnotist Chuck Milligan, standing in the background, hypnotized Petty Officer 1st Class Don Acker on Thursday at Sasebo Naval Base’s Galaxies Club and suggested that Acker was the extremely territorial lifeguard at a swimming pool in which various swimmers were relieving themselves. Acker, complete with a lifeguard’s whistle and float, told everyone to get out of the pool. (Greg Tyler / S&S)

Hypnotist Chuck Milligan, standing in the background, hypnotized Petty Officer 1st Class Don Acker on Thursday at Sasebo Naval Base’s Galaxies Club and suggested that Acker was the extremely territorial lifeguard at a swimming pool in which various swimmers were relieving themselves. Acker, complete with a lifeguard’s whistle and float, told everyone to get out of the pool. (Greg Tyler / S&S) 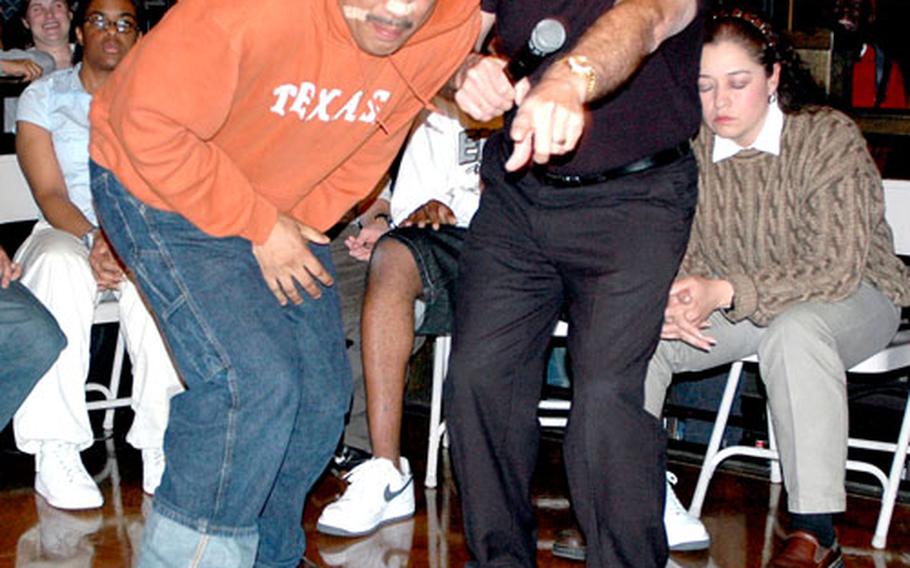 Hypnotist Chuck Milligan, right, hypnotized Petty Officer 2nd Class Clifton Rodriguez to feel as if he’d repeatedly been pricked by something sharp, was bleeding and needed a bandage. Eventually, the sailor’s face was covered in bandages. In this case, Milligan suggested another area of anatomy needed the first aid. (Greg Tyler / S&S) At the suggestion of hypnotist Chuck Mulligan to fall asleep, a group of 20 people, including the two participants shown here, flopped over to one side or slid from their chairs. (Greg Tyler / S&S)

SASEBO NAVAL BASE, Japan &#8212; Scanning the crowd of approximately 200 people at the Galaxies Club on Thursday, it was a rarity to see anyone not smiling, giggling or outright belly laughing.

Chuck Milligan, a former Marine Corps sniper in the Vietnam War turned comedic hypnotherapist, was typically well-received during his 16th visit to Sasebo.

&#8220;My career was as a cop for many, many years, which is what I wanted to be from the time I was about 16. I just started doing the hypnotism as sort of a bar trick years ago and now it&#8217;s how I make my living,&#8221; the San Diego resident said before the show.

Milligan, 56, has mesmerized Sasebo audiences for 14 years. He came in December, as he does every year, but the vast majority of sailors were in the North Persian Gulf.

He decided to come back on his own dime this spring, after the Essex Amphibious Ready Group returned from an eight-month deployment, to express appreciation to servicemembers, base officials said. He performed four shows in Sasebo and one at Yokosuka Naval Base last week.

He has performed at Misawa Air Base, Naval Air Facility Atsugi, Yokosuka Naval Base and Marine Corps Air Station Iwakuni.

He plans to return to Sasebo and other bases in December as part of the Japan Jams series.

On Thursday night, Milligan had about 20 hypnotized volunteers onstage believing it was freezing and then sweltering.

&#8220;He had me acting like I was Ricky Martin and I was singing, dancing and mingling out in the audience as if they were my fans,&#8221; said Petty Officer 3rd Class Paul Wells, a crewmember from the USS Essex.

&#8220;I remember watching some of the other people going under hypnosis, but I don&#8217;t remember anything about acting like Ricky Martin.&#8221;

&#8220;I barely remember being the lifeguard, but I do remember thinking there were cockroaches all over the floor. I remember feeling very grateful to the girl who was supposed to have killed them all,&#8221; Acker said after the show.

Milligan, a trained hypnotherapist who uses the skills only for entertainment purposes, said people often ask him about &#8220;trade secrets.&#8221;