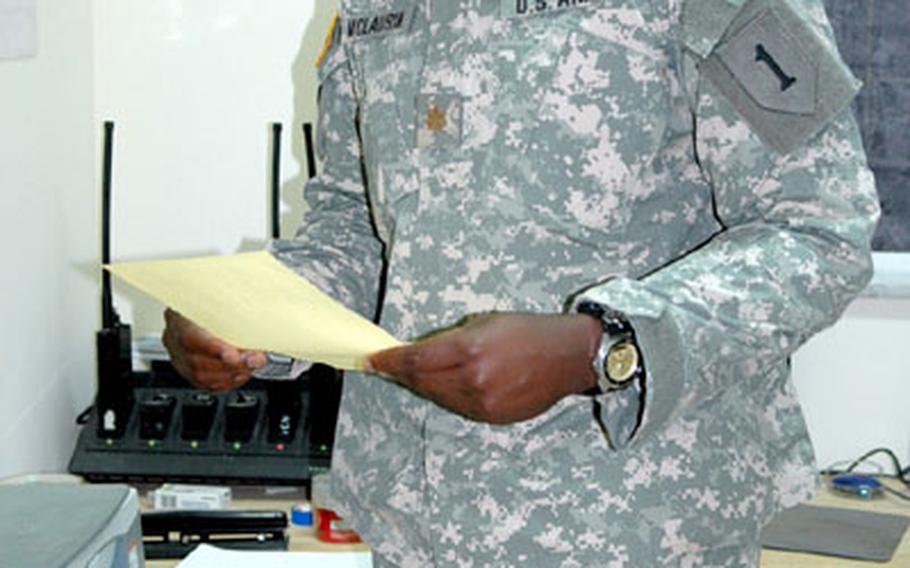 AL-RASHEED ARMY BASE, Iraq &#8212; Comedian Dave Chappelle is famous for his racy jokes, not his military expertise. So he might be surprised to learn that in Iraq, his routines are helping the Iraqi army wrestle its way to a more efficient logistics system.

Chappelle has a connection to Iraq thanks to Maj. Mondrey McLaurin, the U.S. Military Transition Team (MiTT) adviser for the 9th Iraqi Division&#8217;s Logistics and Administration Battalion.

McLaurin and his team of nine soldiers advise one of the three logistics battalions currently in the Iraqi army.

The big problem facing the battalion, McLaurin said, is that &#8220;requisition and documentation is throwing everything off. We think we know the plan to get requests from battalion to brigade to division,&#8221; but as soon as they try the system, someone tells them the system works differently, he said.

Since the Iraqi logistics system isn&#8217;t computerized, everything has to be requested using a standard paper form McLaurin calls a &#8220;101,&#8221; which lists the item, its price and the number requested.

The Iraqis were having some issues filling out and keeping track of the 101 forms. At the same time, the MiTT soldiers had accidentally received an order of 100 boxes of yellow, instead of white, printer paper.

One night last week the team was watching a video of Chappelle doing a sketch involving the taste of yellow sheet cake.

When he heard about the yellow paper during a staff meeting Wednesday night, Lt. Col. Matthew Staunton, team chief for the entire 1st Brigade, 9th Iraqi Army Division MiTT, was so interested he told McLaurin to prepare a small brief on the matter to present to other teams.

So it might not be long before a one-time joke becomes a permanent Iraqi army routine.