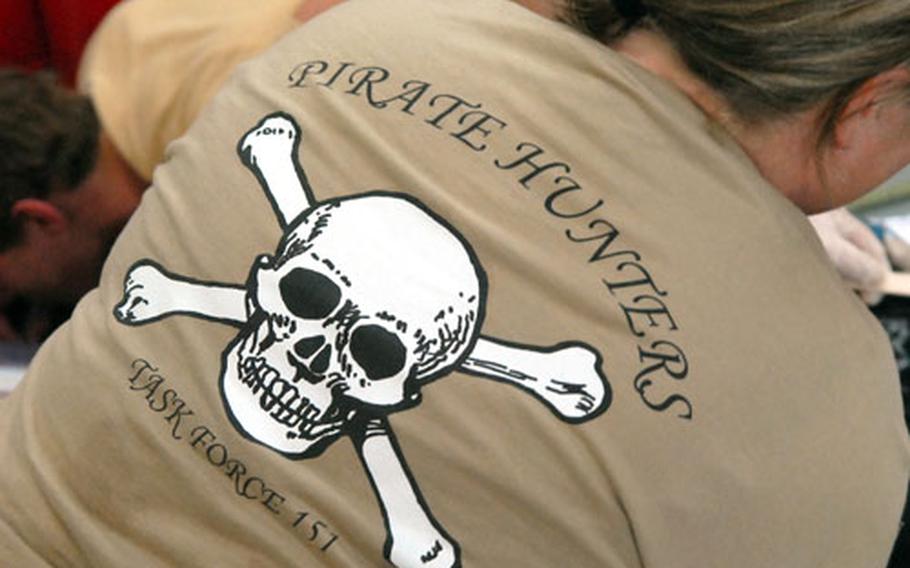 A pirate-themed T-shirt on a Danish sailor is appropriate for the crew of the HDMS Absalon. For more photos, see the link at the top of the story. (James Warden / S&S)

Photo gallery: Pirate hunters in the Gulf of Aden

(Day One of a two-day series)

THE GULF OF ADEN &#8212; The USS Boxer is an impressive ship, purpose-built to show up on the horizon and grab a well-protected beach from a determined enemy. An array of helicopters can spot threats before they ever see the amphibious assault ship. Harrier jets can pound them into the ground. And hovercrafts can carry hundreds of Marines and their armored vehicles to storm the beach.

But the Boxer isn&#8217;t facing off against an enemy navy. Instead, it&#8217;s looking for small groups of men in far less impressive skiffs who are armed only with a few AKs and perhaps a rocket-propelled grenade or two. These men are pirates, and they&#8217;ve cost the shipping industry money out of proportion to their small boats and weak weapons.

The Boxer is the flagship for Combined Task Force 151, a joint effort between the U.S., Danish and Turkish navies to prevent pirates from attacking merchant ships in the Gulf of Aden just off Somalia&#8217;s coast.

Piracy in the gulf arose out of the anarchy in Somalia. With the country unable to defend its territory, fishing boats from other countries came into its waters to haul in fish illegally. Angry Somali fishermen captured these boats and ransomed them as retribution, but they quickly realized they could make a lucrative living by capturing larger boats unrelated to their initial complaints.

Picking out pirates is harder than just looking for the Jolly Roger. Many legitimate small boats ply the Gulf of Aden. The pirates can pose as one of these boats whenever a warship or military aircraft passes by.

Marine Sgt. Alex Azcuenaga, an aerial gunner for a UH-1Y Huey, spends his days in the sky trying to distinguish pirate skiffs from all the other small boats. Dhows with lots of people or small boats without fishing nets catch his eye, although even these can be innocent.

But Azcuenaga said his mission is not that different from what he did in Iraq.

These challenges put small, fast boats at the front of the fight. Small teams on the Navy&#8217;s rigid-hulled inflatable boats speed out ahead of the large warships to confront any pirates they encounter. Pirate attacks on merchant ships have been getting more aggressive lately, but they invariably surrender in the face of these well-trained, well-armed teams.

CTF 151 is not the only anti-piracy effort in the gulf. The European Union has its own task force &#8212; although its mission is simply to protect humanitarian aid shipments, not specifically to fight pirates. (The Danish navy is working with the Americans because that country opted out of the EU&#8217;s military pact for fear of undermining NATO, and cannot take part in the EU&#8217;s military operations.)

Russia and China have sent their own ships, as well. They escort convoys of ships from their own countries through the pirate-infested waters. In all, ships from about two dozen countries are working together to defend the merchant ships, despite the varied missions.

Danish Navy Capt. Dan B. Termansen, commander of the HDMS Absalon, said the effort has made clear progress. Successful pirate attacks have dropped off with increasing numbers of ships. The Absalon, alone, had found 88 suspected pirates as of the week March 15. That&#8217;s over one-third of the approximately 250 pirates that all the nations in the gulf had found in the more than 200 days that they&#8217;ve been patrolling the waters. Termansen was quick to note that none of the suspects they captured were repeat offenders.

"They probably think when they come ashore they want another career," he said.

Ships in the fight

HDMS AbsalonCountry: DenmarkType: A cross between a frigate and a support shipLength: 450 feetPersonnel: 120 to 180 in the Gulf of AdenWeapons: one 5-inch gun, two 35 mm guns, six 12.7mm machine guns, torpedoes and various missilesHelicopters: Up to two

Pirate skiffLength: 20 to 60 feetPersonnel: Three to seven per boatWeapons: AKs and sometimes rocket-propelled grenadesOther: powered by dual engines, almost exclusively made by Honda; pirates use GPS to navigate and satellite phones to communicate

1.The pirates launch near Bosaso on Somalia&#8217;s northern coast in groups of two or three skiffs using GPS to navigate. Each skiff contains three to seven pirates. Sometimes a larger "mothership" tows smaller boats behind it.

2.They overnight off the coast of Yemen, turning off their engines to conserve fuel.

3.They attack any vulnerable boat near them when morning arrives, often beginning by strafing the bridge with AK-47s to tell the ship to stop. The pirates climb aboard using ladders and grappling hooks and secure the boat, working from the bridge down through the ship. If no ships are in the area, they continue drifting and try again until fuel runs low.

4.The pirates steer the ship to cities on Somalia&#8217;s east coast, such as Bargaal, Eyl, Garaad and Hobyo, and give it to another group of pirates. Along the way, a "pirate code" keeps violence in check by docking the pay of anyone who harms the ship or the crew.

The telltale signs of a pirate skiff

Crowded boats. The skiffs are usually loaded down with more people than a fishing boat would need.

The lack of nets and other fishing equipment.