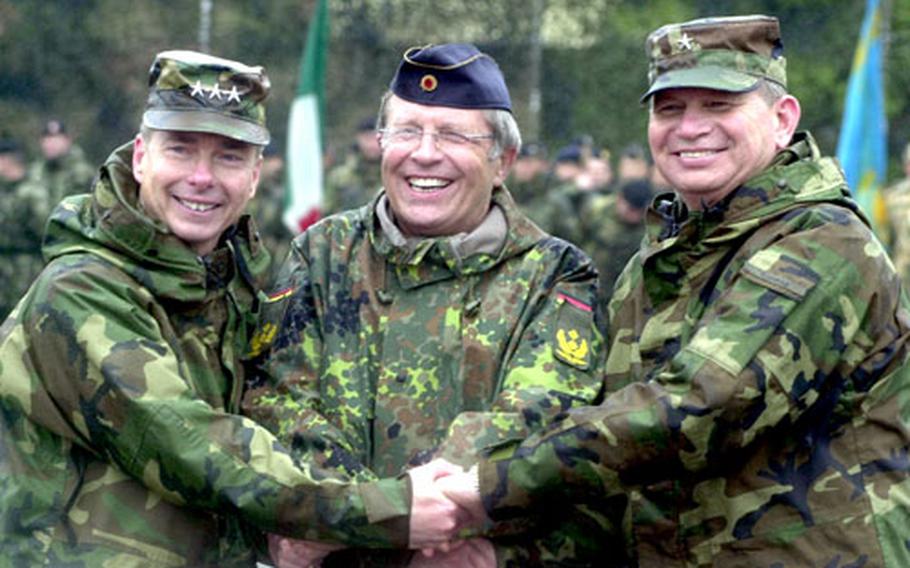 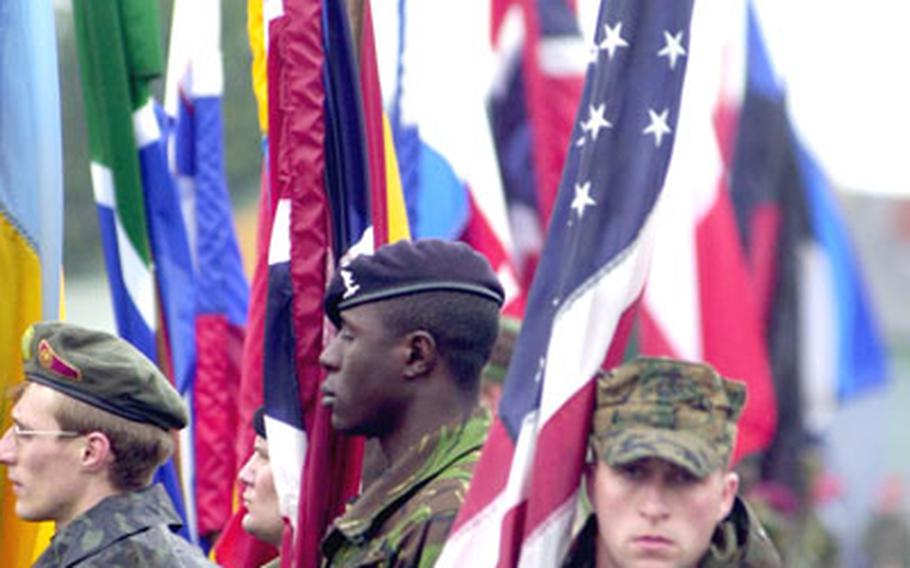 Combined Endeavor brought together delegations from some of the U.S.&#39;s oldest allies, such as the United Kingdom, to some of the newest, such as Kyrgyzstan, troops from which are pictured here. (Terry Boyd / S&S)

BAUMHOLDER, Germany &#8212; One more year of working together. One less chance of war.

In the jargon-obsessed international military universe, the hottest buzzword is &#8220;interoperability,&#8221; and the U.S. European Command/NATO/Partnership for Peace exercises tagged Combined Endeavor are built around it for one of the most elegantly simple concepts in military-to-military relationships.

At the annual exercises, the United States and its global allies sort out differences in communication equipment and techniques now that might keep them from cooperating during future crises, said Air Force Brig. Gen. Thomas Verbeck.

&#8220;The idea is to bring people together before combat, or before peacekeeping. Before the natural disaster. Before the earthquake,&#8221; said Verbeck, head of Stuttgart-based EUCOM&#8217;s international interoperability, concepts and experimentation directorate.

In the long run, years and years of militaries &#8212; some former enemies &#8212; cooperating and building trust today makes it less and less likely their countries will go to war tomorrow, said John Grimes, assistant secretary of defense and the DOD&#8217;s chief information officer.

Combined Endeavor 2006 wrapped up Thursday with a colorful, chilly and brief closing ceremony. U.S. and German officers basically said &#8220;thank you&#8221; to soldiers from 40 participating countries passing in review at Lager Aulenbach, a German artillery base next to H.D. Smith Barracks, the 1st Armored Division post in Baumholder.

Under the original moniker, allies have gotten together every year since 1994 to figure out how to integrate communications equipment.

Nations share communications equipment, personnel, tactics and procedures, Verbeck said. Each country can bring whatever they want, and decide with whom &#8212; and how much &#8212; they want to share what can be sensitive technology.

Because participants range from Group of Eight nations such as Germany, the United States and Russia to Albania and Kyrgyz Republic, it can be an interesting dynamic.

When the Georgians came back three years later, they&#8217;d completely upgraded to modern equipment, he said.

More than half of the brigadier generals and major generals at Combined Endeavor 2006 got to know one another as junior officers during previous exercises, Vebeck noted: &#8220;That ought to tell you how important this is to international military cooperation and security.&#8221;