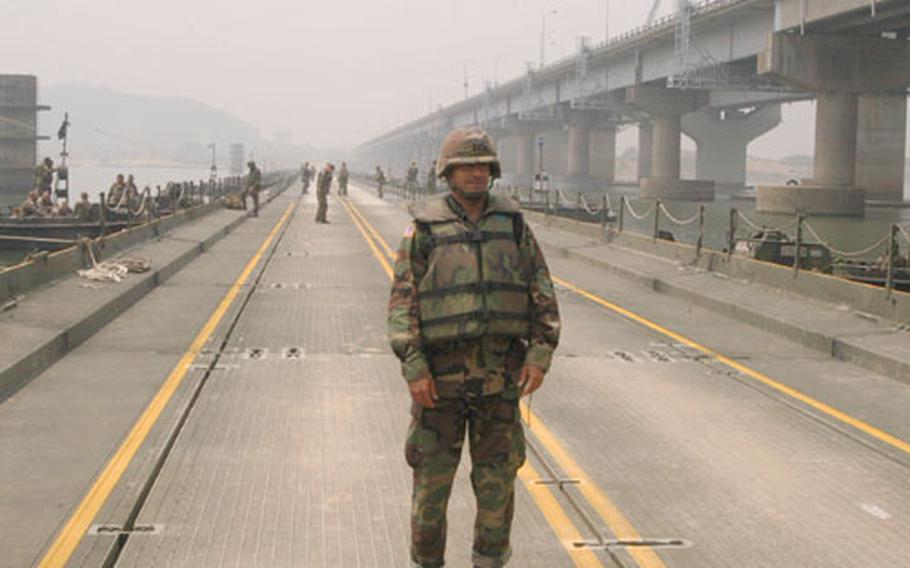 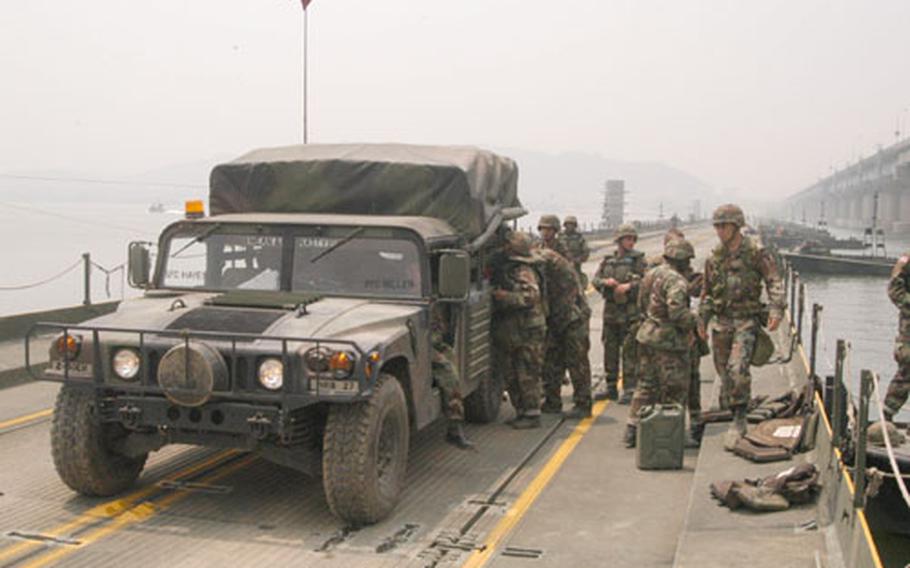 SEOUL &#8212; South Korea&#8217;s Han River already had more than a dozen bridges across it, but by the end of the week, there was one more, built by U.S. and South Korean engineers in less than two hours.

The soldiers warmed up the day before by building six-bay rafts from pieces dropped into the river by U.S. Chinook helicopters.

Stewart said there were no hiccups in Thursday&#8217;s full-scale operation.

&#8220;The communication went very well. Everybody understood what the plan was and how to execute the mission. We thought it would take three hours just to get the bays across but we put them across and got the anchorage system in place in under two hours,&#8221; he said.

In combat, the bridge would be built exactly the same way, although there would be more security and issues over timing the operation, Stewart said.

It was the first full Han River cross involving U.S. forces in five years, he said.

&#8220;It was very satisfying. Most of the soldiers here haven&#8217;t seen it done before,&#8221; said Stewart, who is a qualified architectural engineer, able to design structures such as bridges.

The most important part of conventional bridge building is getting the foundations right, he said. However, the biggest challenge for engineers assembling a floating bridge is managing their assets and resources, he added.

The bridge built by the engineers Thursday was supported by strong cables attached to the banks of the river at either end.

It also was held in place by the Mk-2 boats that helped build it. The boats were spread along the length of the bridge on the downstream side with their throttles open to push against the current and hold the structure in place.

1st Lt. Edward Kim, who has South Korean ancestry and led one of the U.S. bridge-building platoons, said language barriers were not a problem during construction. He was able to use his Korean language skills while Korean Augmentees to the U.S. Army helped soldiers communicate with their counterparts.

&#8220;The soldiers were motivated. It is our first time doing such a combined exercise. The South Korean battalion couldn&#8217;t do it by themselves. They don&#8217;t have enough assets and neither do we,&#8221; Kim said.

For Sgt. 1st Class James Hayes the bridge was the second biggest he has helped build in a 19-year Army career.

The longest floating bridge he has seen, in Bosnia, included two sections, each comprising more than 100 bays.

Once the Han River bridge was completed it was time to test it by driving across. Staff Sgt. Bernardo Gonzalez, operating a Hummer, was among the first to cross the bridge.

The weight of the Hummer was easily supported by the bays, which soldiers said sink down when heavier, tracked vehicles pass over them. Gonzalez said he preferred driving on the bridge to driving on land.