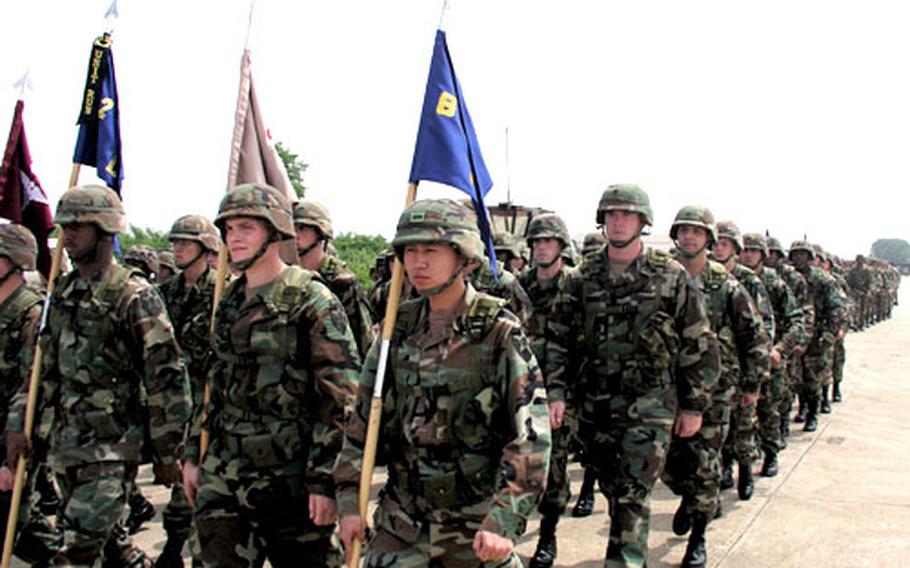 At Camp Humphreys in South Korea on Thursday, troops of the Army’s newly established 2nd Multifunctional Aviation Brigade march off of Tiger Ramp following a ceremony that marked the formal “standing-up” of the unit. (Franklin Fisher / S&S)

At Camp Humphreys in South Korea on Thursday, troops of the Army’s newly established 2nd Multifunctional Aviation Brigade march off of Tiger Ramp following a ceremony that marked the formal “standing-up” of the unit. (Franklin Fisher / S&S) 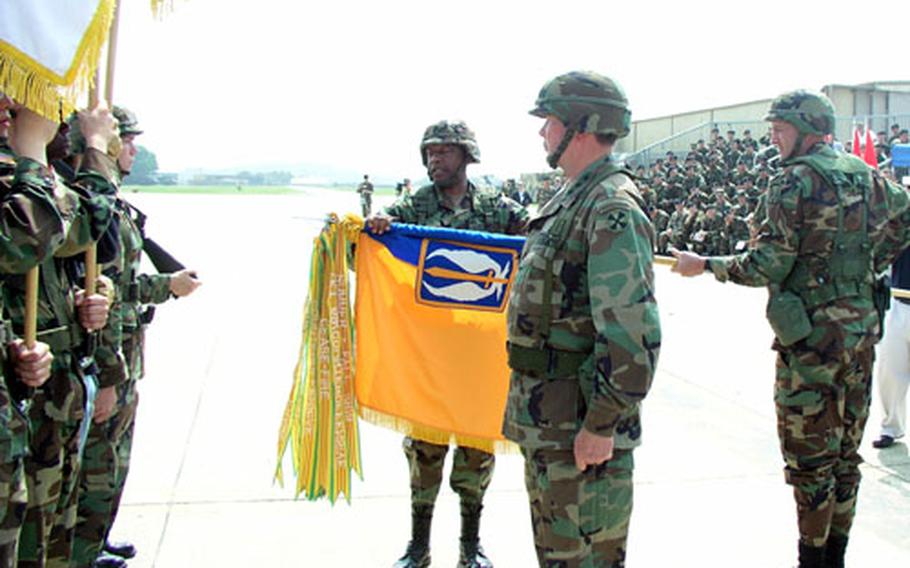 CAMP HUMPHREYS, South Korea &#8212; A new type of U.S. Army aviation unit that merges various aircraft into a single brigade was established in South Korea during a ceremony here on Thursday.

The Army in South Korea had three traditional aviation brigades: the 6th Cavalry Brigade, consisting of the AH-64D Apache Longbow attack helicopter; the 2nd Aviation Brigade, part of the 2nd Infantry Division; and the 17th Aviation Brigade, with CH-47 Chinook and UH-60 Black Hawk helicopters and the C-12.

But Thursday morning&#8217;s ceremony saw the inactivation of the 17th Aviation Brigade, the &#8220;reflagging&#8221; of the 6th Cavalry Brigade and the merger of assets from all three into the new brigade.

The brigade is headquartered at Camp Humphreys under command of Col. Peter Foreman, previously the 6th Cavalry Brigade commander.

&#8220;This truly is a historic day for the United States Army and 8th Army as we draw down from three aviation brigades to only one,&#8221; said Col. David J. Abramowitz, 17th Aviation Brigade commander.

&#8220;Today is a day of emotions, for we are folding up the colors of the 6th Cavalry Brigade,&#8221; said Foreman, who briefly traced the history of the brigade, which dates to 1861.

It was, he said, &#8220;A brigade that turned in its horses and became motorized, then evolved into a mechanized force&#8221; and evolved further into an attack helicopter unit.

&#8220;Now this brigade is transforming again,&#8221; merging with the other units to become a &#8220;powerhouse, capable of executing any mission across the spectrum of aviation operations,&#8221; Foreman said.