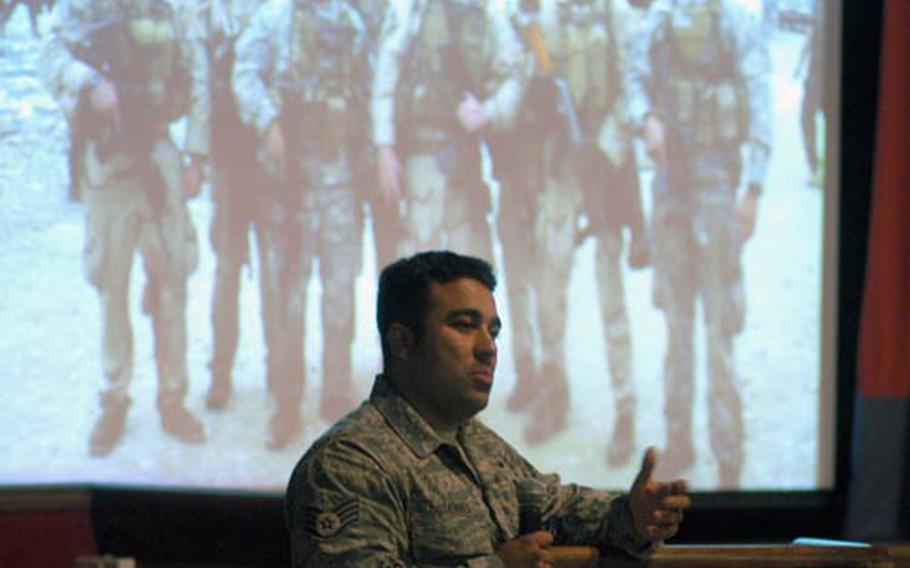 Staff Sgt. Robert Gutierrez, of the 321st Special Tactics Squadron, on Wednesday discusses a mission he participated in while deployed to northeastern Afghanistan. (Sean Kimmons / S&S)

Staff Sgt. Robert Gutierrez, of the 321st Special Tactics Squadron, on Wednesday discusses a mission he participated in while deployed to northeastern Afghanistan. (Sean Kimmons / S&S) 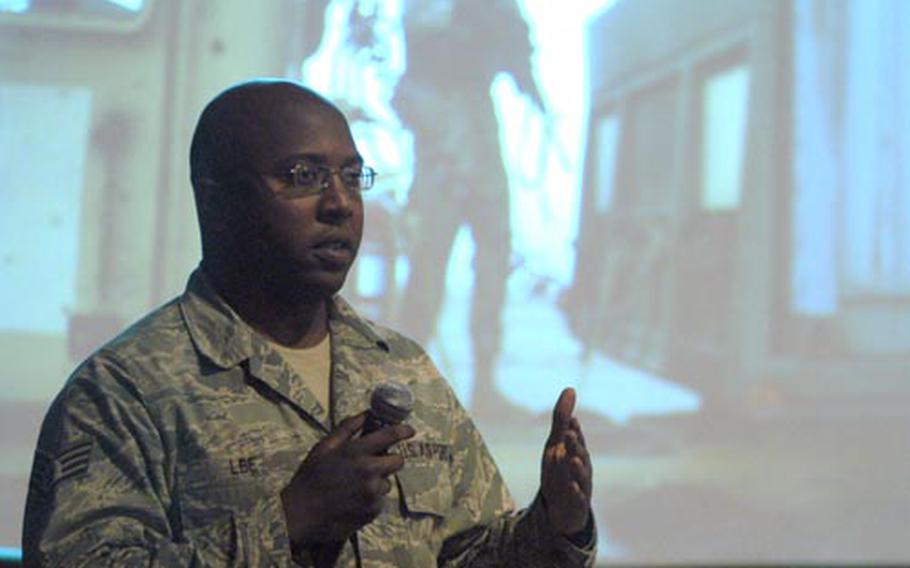 RAF MILDENHALL, England &#8212; Roughly 50 airmen sat silently as they watched a video showing two bombs dropping out of the sky and blasting an enemy complex perched on a steep mountain in northeastern Afghanistan.

Following other videos of the bombarded objective, Staff Sgt. Robert Gutierrez sparked some laughter when he told the crowd with a proud grin, "I love my job."

Last month, the 321st Special Tactics Squadron airman returned from six months in the war-torn country. It was Gutierrez&#8217;s job to relay enemy positions from the battleground to aircraft in the skies waiting to drop bombs.

Just like Gutierrez, every combat veteran has a story to tell &#8212; and that&#8217;s the premise behind Warrior Stories, a new monthly forum that allows RAF Mildenhall airmen to share war experiences to fellow airmen.

Since June 2007, some 3,000 Mildenhall airmen have deployed, with many of their stories left untold, according to Master Sgt. Hayden Pickett, the forum&#8217;s coordinator. Pickett initiated the forums to give non-deployed airmen an idea of what combat is like.

Another benefit is to let the presenters to brag about missions often overlooked by external media.

"It spreads the positive news," she said.

With his videos, Gutierrez showcased the coalition&#8217;s dominance as F-15E jet aircraft, A-10 Warthog jets and AH-64 Apache helicopters obliterated the stronghold of the largest gem and weapons smuggler in a remote Afghan region, he said. The April operation turned into a fierce battle that left 200 enemy combatants dead and 140 wounded. Two U.S. airmen were killed and 15 were wounded.

Earlier, Staff Sgt. Brian Lee of the 100th Logistics Readiness Squadron spoke of the combat trucker duties he handled during three Iraq deployments. Master Sgt. Jerry Lambert from the 100th Maintenance Group told attendees of his special-duty assignment as an interrogator at an Iraqi prison, and Maj. Patrick Knott of the 100th Operations Group reflected on his six-month tour in Baghdad.