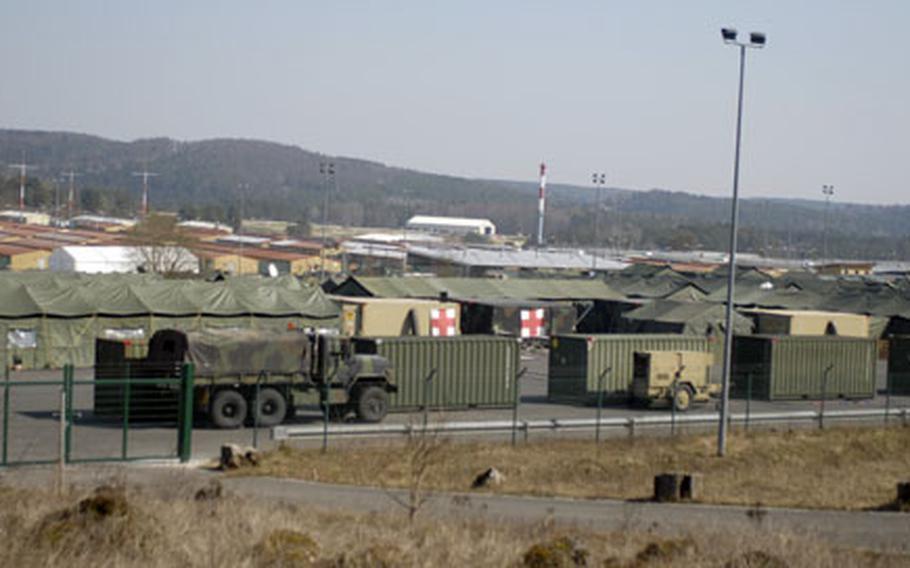 On the outside, the 212th Combat Support Hospital looks like a collection of olive tents. Inside, the tents are gleaming white and divided into intensive care and intermediate care wards, operating theaters, a pharmacy, laboratory, X-ray room and dental clinic. (Seth Robson / S&S) The 212th Combat Support Hospital&#39;s dental clinic has been busy in the lead-up to a mission rehearsal exercise for the 173rd Airborne Brigade at Hohenfels Joint Multinational Readiness Center this week. (Seth Robson / S&S)

HOHENFELS, Germany &#8212; Army surgeon Maj. Simon Telian has lost count of the arms and legs he&#8217;s amputated during deployments to Iraq and Afghanistan.

The surgery Telian performed at Hohenfels on Monday during a field exercise with his unit, the 212th Combat Support Hospital, or CSH, was a little less drastic &#8212; excising a cyst on a hairy soldier&#8217;s back.

The 35-year-old Van Nuys, Calif., native, will work with nine other 212th physicians in a 44-bed tent hospital at Hohenfels to support the Afghanistan-bound 173rd Airborne Brigade&#8217;s mission rehearsal exercise over the next 10 days.

In addition to the 10 physicians, the hospital includes 30 nurses, 30 to 40 medics and dozens more support staff, according to 212th commander Col. Angel Lugo.

During the exercise, the hospital will stand by to treat injuries soldiers suffer in the field and to work on simulated combat injuries.

On the outside, the CSH looks like a collection of olive tents. Inside, the tents are gleaming white and divided into intensive care and intermediate care wards, operating rooms, a pharmacy, laboratory, X-ray room and dental clinic.

&#8220;We have very similar equipment to what you would find in a fixed facility here in Germany. On downrange missions this hospital could support a division worth of troops in combat,&#8221; Lugo said.

&#8220;Normally we would be set up to stabilize casualties, combat disease and illness and make sure patients are ready to fly out of theater. We get them out as quickly as possible, but we have the capacity to help patients for a longer period of time,&#8221; he said.

&#8220;We tell soldiers if they get hurt in combat and make it to our hospital they will live. Combat veterans know that and young guys are reassured when we come out here and train with them,&#8221; he said.

And the hospital is 100 percent mobile, he said.

In October 2005, soldiers drove the hospital from an airport at Islamabad, Pakistan, to Pakistani Kashmir within 6 miles of the epicenter of a massive earthquake. The 212th staff treated 20,000 patients in the four months following the quake, Lugo said.

Half the soldiers in the unit are veterans of the Pakistan operation. Others have experience in Iraq and Afghanistan, he said.

The 32-year-old Fayetteville, N.C., native said the CSH can provide a higher level of care that the forward surgical team she served with in Iraq in 2003.

&#8220;We did reactive surgeries right off the battlefield (in Iraq). We were doing surgery on the roadside in tents. This is a full-on hospital. People are getting definitive surgeries, lab tests and X-rays,&#8221; she said.