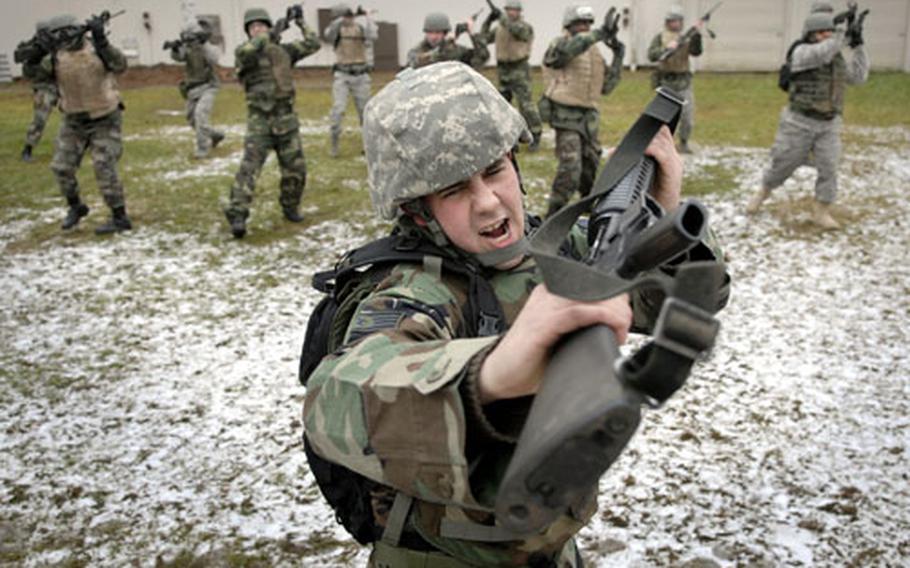 EINSIEDLERHOF AIR STATION, Germany &#8212; With bodies planted face-down on the ground, so close they could almost taste the wet dirt under their noses, airmen with the 435th Air Base Wing slid along Thursday in a low crawl while cradling an M-16 rifle.

Some grunted, others groaned. Most stopped a few times to catch their breath.

After 20 yards of trying to elude detection by an imaginary enemy, the 50 or so airmen stood with mud staining their armored vests and helmets.

Welcome to combat skills training, a new course now required for all 435th airmen within 120 days of deploying to a war zone or any area qualifying for hostile fire pay.

The Air Force mandates 19 hours of combat skills training, a requirement that&#8217;s already been widely adopted across the service. Led by four airmen with extensive experience in war zones, the 435th stood up its first class on Nov. 12. So far, 200 airmen have completed the course, said the instructors, noting it&#8217;s open to airmen from units outside the 435th.

The curriculum is divided into equal parts classroom instruction and field training. Airmen review how to handle an M-16 and discuss rules of engagement and how to react under fire; they learn the proper way to wear 35 pounds of combat gear and that a &#8220;butt stroke&#8221; is for self-defense.

Most challenging, say the airmen, is the field portion, where the information they learn in class is put to the test &#8212; in all sorts of weather.

A typical afternoon outside may include wielding the M-16 like a martial arts weapon and practicing fire team formations, with laps up and down the field in between. The run in full gear is designed simply to tire them out, says Graves.

The instructors also want airmen to be prepared for the unexpected.

For that very reason, some airmen said Friday they didn&#8217;t mind the extra training, despite the wet, cold conditions.

VideoGet the Flash Player to see this player.//See a photo gallery here.