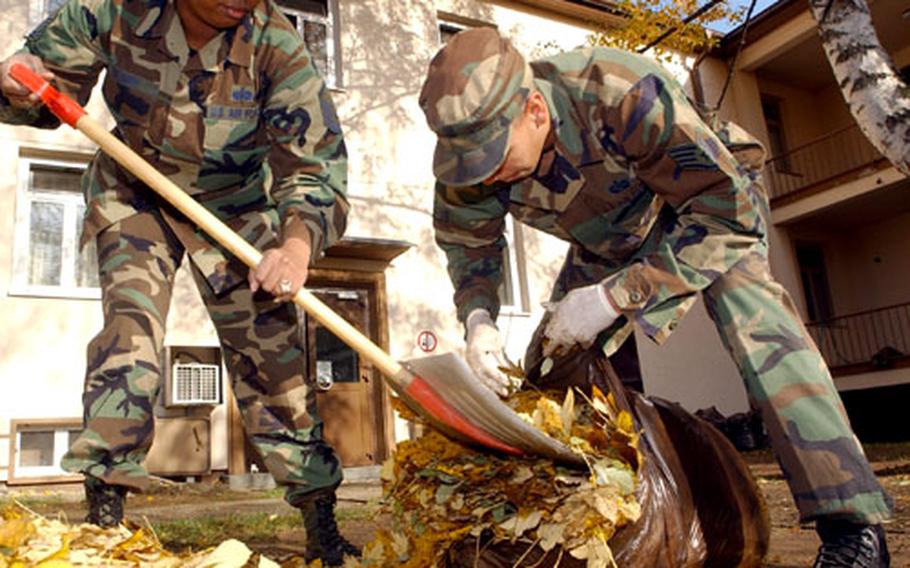 Airmen at Rhein-Main Air Base, Germany, dispose of leaves during Fall Clean Up, part of USAFE’s Combat Proud Program in this 2003 file photo. USAFE officials have decided to drop or change many of the “Combat” programs, which were introduced by former commander, Gen. Robert “Doc” Foglesong. (Raymond T. Conway / S&S)

RAMSTEIN AIR BASE, Germany &#8212; U.S. Air Forces in Europe officials are cutting or changing many of former commander Gen. Robert &#8220;Doc&#8221; Foglesong&#8217;s top special-interest programs, which generated both accolades and gripes from airmen at bases throughout Europe.

Gen. Tom Hobbins, who took command of USAFE in December, is giving his predecessor&#8217;s list of 15 named programs a makeover. In a memo to airmen throughout Europe, Hobbins wrote that one of the recurring questions he has been asked since his arrival has been the fate of the programs.

&#8220;The answer is simple; we are declaring victory on our programs!&#8221; he wrote in the memo published last Friday.

Foglesong quickly launched 12 programs months after taking over command in 2003 and made them the hallmark of his leadership, trumpeting the programs in numerous TV commercials and newspaper articles published in command-sponsored base newspapers.

The programs focused on everything from tidying up the bases to boosting physical fitness, but many airmen complained that the initiatives pulled them away from their jobs at a time when many units were short-staffed. The programs also required quarterly reporting from commanders to the headquarters.

Soon after assuming command, Hobbins created a team to review the programs to see if any changes needed to be made. Maj. Don Hoffman, chief of the Analysis Branch at USAFE at Ramstein, headed up the small group who spoke to hundreds of people about the programs.

&#8220;If something is working, do you need to keep looking at it month after month after month? Maybe you want to shift your focus elsewhere,&#8221; Hoffman said. &#8220;And, so, that&#8217;s what we tried to do with our proposal. Identify those areas where we felt that we were succeeding well enough that we didn&#8217;t need to look at them as closely anymore as well as identifying areas that we wanted to continue looking at and then shift focus into other areas we might want to look into now.&#8221;

Combat Proud, one of the most visible and controversial of Foglesong&#8217;s programs, will remain but have a new name. The program required airmen to clean up their bases and work areas by pulling weeds and paint whatever needed another coat.

Airman 1st Class John Ortiz, who works at the post office at Kapaun Air Station in Kaiserslautern, said Combat Proud duty garnered a lot of gripes and complaints among airmen.

Air Force Staff Sgt. Melvin Watson, who also works at Kapaun&#8217;s post office, said the bases look far better than they did when he was stationed in the area years ago. But the extra work put a tremendous strain on airmen and their commands.