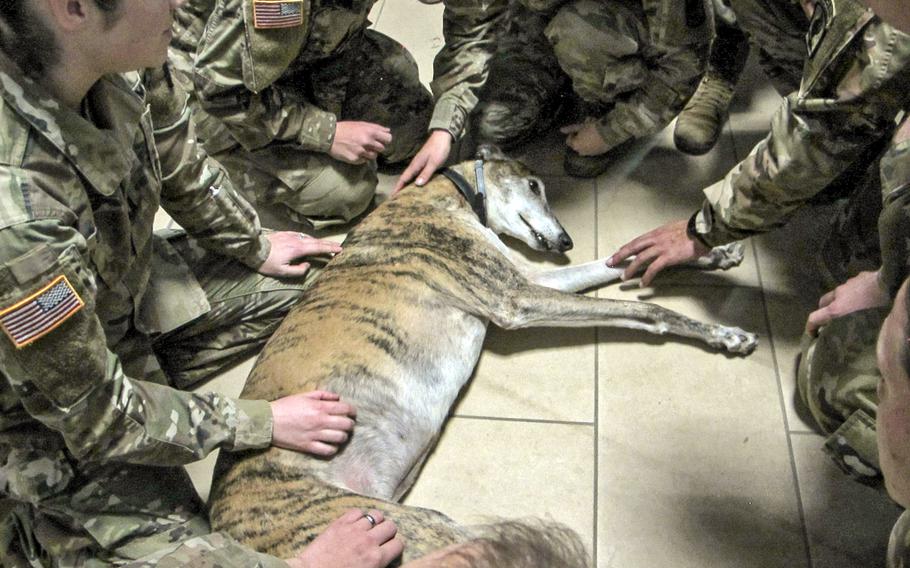 Nacho the greyhound lies calmly as combat medics with the 173rd Airborne Brigade learn from Capt. Jennifer Silvers, a veterinarian with U.S. Army Garrison Italy, left, how to give first aid to dogs. (Nancy Montgomery/Stars and Stripes)

Nacho the greyhound lies calmly as combat medics with the 173rd Airborne Brigade learn from Capt. Jennifer Silvers, a veterinarian with U.S. Army Garrison Italy, left, how to give first aid to dogs. (Nancy Montgomery/Stars and Stripes) 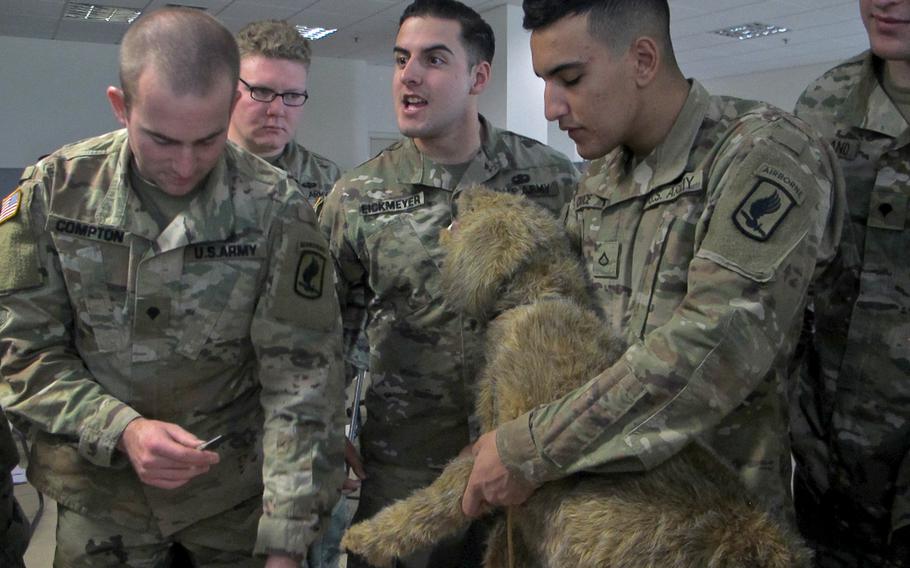 Combat medics with the 173rd Airborne Brigade start an IV on a dog mannequin as part of training on how to provide first aid to four-legged troops on Dec. 5, 2019, at Caserma Del Din in Vicenza, Italy. (Nancy Montgomery/Stars and Stripes) VICENZA, Italy — Combat medics learned how to apply their lifesaving skills to four-legged troops at a seminar with the help of vets, two dog dummies and a greyhound named Nacho.

Veterinarian Capt. Jennifer Silvers and veterinary technician Staff Sgt. Elizabeth Whitaker, both with U.S. Army Garrison Italy, taught the group of 25 medics with the 173rd Airborne Brigade how to apply the first aid basics they use on humans, to dogs.

“They know the tasks. They just don’t know the anatomy,” Whitaker said Thursday.

The training was designed to increase the number of people who can treat injured and sick military working dogs, which face the same hazards as their human partners when deployed, including bullets, bombs and heat stroke, as well as uniquely canine woes such as burned paw pads, broken tails and gastrointestinal issues caused by dietary indiscretions.

Dogs, it turns out, like the taste of C-4 explosive, Whitaker said. The result, if they eat it, is “explosive diarrhea,” she said.

The medics learned how to stop bleeding, start IVs and bandage a broken leg into a kind of soft cast, practicing the techniques on two dog mannequins, which looked like stuffed animals. They also were able to observe an actual dog – Silvers’ greyhound, Nacho, whom she had adopted from the veterinary school she attended – who lay serenely on the floor as Silvers instructed the medics on dog anatomy.

Nacho appeared to drift off to sleep as the medics felt his leg for a vein, counted his ribs and scratched his head.

Dogs have become increasingly prominent in military operations. They’re used to sniff out bombs and drugs, patrol, and chase and subdue suspects. Recently, a Belgian Malinois named Conan was part of the special forces raid that ended in the death of ISIS leader Abu Bakr al-Baghdadi.

Between 2,000 and 2,600 military working dogs have deployed to Iraq and Afghanistan between 2001 and 2013, researchers said in a study published in Military Medicine in 2018. Injuries, particularly from gunshots or explosions, were the most common cause of death for 92 dogs that the researchers identified as having died during their deployments, the study said.

Spc. John Huber, who has previously worked only on humans, said he was impressed by “how easily transferrable the skills are from human to dog.”