Combat Medical Badge a point of contention for medics 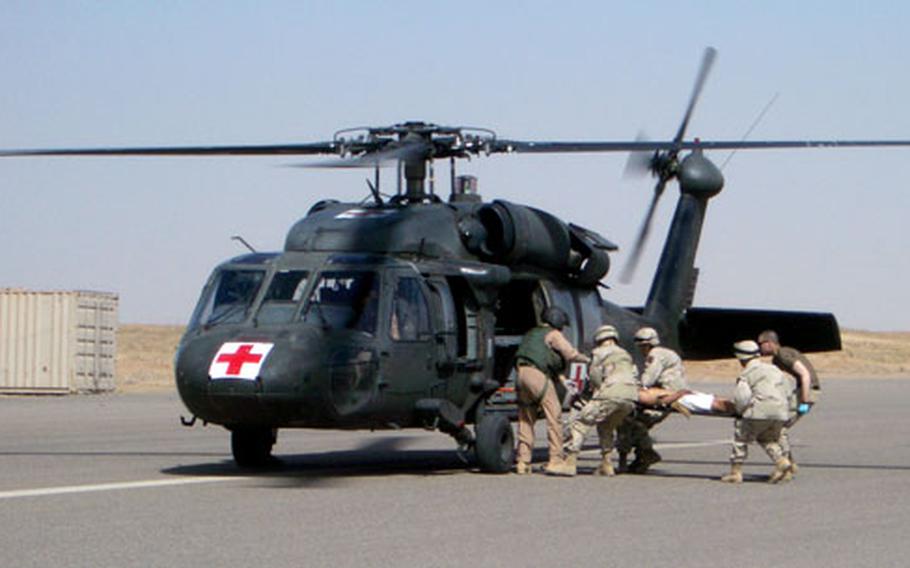 Medics and soldiers from the 1st Battalion, 7th Field Artillery Regiment and the 1st Battalion, 33rd Field Artillery Regiment load a patient onto the airstrip at Forward Operating Base Summerall near Bayji, Iraq, after a car bomb at the base’s front gate June 1, 2004. Medics in these units currently are not eligible for the Combat Medical Badge. (U.S. Army)

Medics and soldiers from the 1st Battalion, 7th Field Artillery Regiment and the 1st Battalion, 33rd Field Artillery Regiment load a patient onto the airstrip at Forward Operating Base Summerall near Bayji, Iraq, after a car bomb at the base’s front gate June 1, 2004. Medics in these units currently are not eligible for the Combat Medical Badge. (U.S. Army) 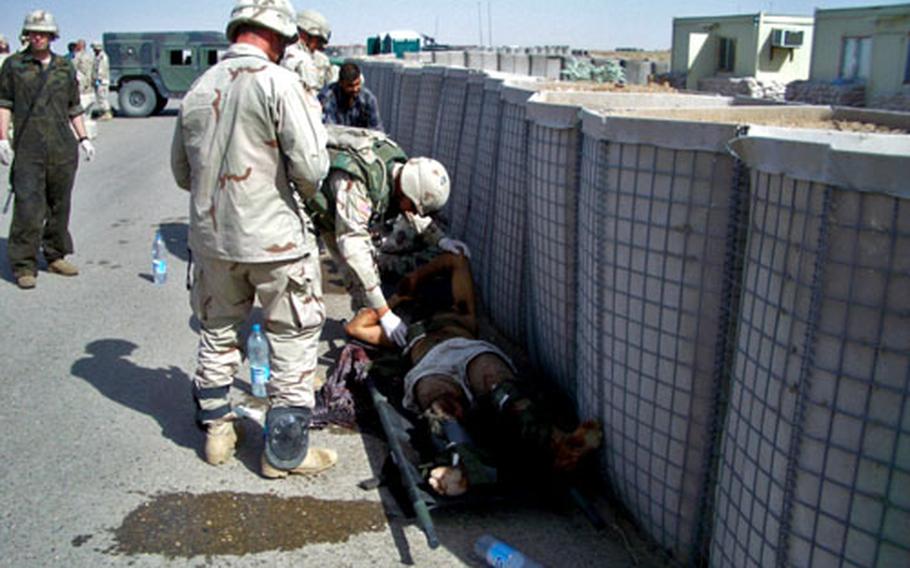 Minutes after the radio squawked a call for help from a bombed convoy near Baghdad, Sgt. Kai Yarwood scrambled aboard &#8220;Medicine Man 27,&#8221; a UH-60 Black Hawk helicopter marked with a big red cross.

On this morning of April 11, 2004, Medicine Man 27 and a sister ship, Medicine Man 68, reached the stricken convoy from their base at Camp Taji near the Iraqi capital in less than seven minutes.

The two birds landed next to a shattered Humvee, hit by a roadside bomb at one end of a highway bridge. Yarwood and Sgt. Dale Hlavacek, then both flight medics with the 45th Medical Company from Katterbach, Germany, rushed out to help four grunts badly cut up by shrapnel.

Yarwood had barely started bandaging the bloody wounds when someone shouted about incoming fire. Moments later, the unarmed Black Hawks soared off like spooked crows, leaving the medics behind.

While infantrymen blasted away, the medics hooked up IVs, gave oxygen, wrapped bandages and hustled the four injured men onto litters. The suppressive fire worked, and the Black Hawks soon swooped in to pick up the medics and their patients.

Yarwood&#8217;s actions earned him an Air Medal. But like hundreds of battle-hardened Army medics in Iraq, he will not be wearing the Combat Medical Badge, the ultimate symbol of courage under fire for soldiers who do his job.

Because, since its creation in the dying days of World War II, the CMB has been reserved for medics serving alongside infantry troops. Army regulations exclude combat medics from aviation units, forward support battalions, military police and air and ground ambulance companies from earning the CMB.

In an old-style war where armies seized territory along well-defined fronts, those types of medics would have served far behind the lines and rarely seen combat. But rocket-propelled grenades and roadside bombs have turned every street, highway and air lane in Iraq or Afghanistan into a hostile-fire zone. There&#8217;s no such thing as a safe trip.

The eligibility restrictions for the CMB and its companion, the Combat Infantry Badge, have stirred anger in the Army. Stars and Stripes has received several letters debating the medals. Some soldiers say the honors should be open to anyone exposed to enemy fire, while others argue doing so would cheapen the awards.

The ruckus prompted the Pentagon earlier this year to create the Combat Action Badge, a new award open to servicemembers from any military branch who come under fire in a combat zone.

Army medics can earn it, too, but they still covet the CMB.

Gradually but grudgingly, the Army has widened the ranks of medics who can earn the CMB. After the Persian Gulf War, medics assigned to ground cavalry and armor units also could earn it. Last summer, medics serving with field artillery or engineer units were made eligible, too.

&#8216;It&#8217;s not precisely the same risk&#8217;There&#8217;s a wide cultural gap between front-line troops and those who rarely venture outside the wire at comfy, sprawling bases like Speicher in Tikrit or Anaconda in Balad.

That&#8217;s why the Army restricts the CIB and CMB to infantrymen and their medics. Lt. Gen. John LeMoyne, then the Army&#8217;s senior personnel officer, said as much at a 2003 hearing before the U.S. Senate Committee on Veterans&#8217; Affairs when he argued against making flight medics like Yarwood eligible for the CMB.

Unlike with the CIB, there is no difference in the job description between medics who can earn the medical badge and those who can&#8217;t &#8212; only in the unit of assignment.

Sgt. Michael Hubbard of the 118th Military Police Company served at Camp Kalsu, Iraq, until early this year, patrolling the main supply routes south of Baghdad. He earned a CMB for an earlier tour of Afghanistan, with the 82nd Airborne Division in Afghanistan.

This time around, he&#8217;s not eligible, although his base was mortared hundreds of times and he has treated countless casualties.

Medics of all stripes agree that the CMB should never become a &#8220;being there&#8221; award as the Bronze Star Medal has become for officers. They agree the key factor in awarding the CMB should be whether the medic performed under fire, not what unit he or she belongs to.

First Lt. Chad Cole, 34, a physician&#8217;s assistant, commanded the medics of TF 1-7 in Iraq, which was composed primarily of soldiers from the 1st Battalion, 7th Field Artillery Regiment from Schweinfurt, Germany. He served as an enlisted medic during the first Gulf War. He thought the Army cheapened the medical badge by awarding it too freely.

Getting the badge anywaySome female medics sense a whiff of sexism in the current rules. Spc. Sadie Harrison, 23, of the 557th Medical Company, spent more than half of her yearlong deployment attached to TF 1-7. Her ambulance once got hit by a roadside bomb, and she has treated patients under fire countless times.

Technically, she&#8217;s ineligible because women aren&#8217;t allowed to serve in combat units. But Cole nominated her for the CMB, and eventually she got it.

It does seem that some medics from ineligible units are finding a way to get the CMB, anyway. The former 1st ID commander, Maj. Gen. John Batiste, approved CMBs for eight medics (including Harrison) who served with 1st ID units. McLean, of the 1st ID&#8217;s 299th FSB, has submitted 31 of his support medics for the award. Four have received them; the rest are awaiting a decision.

What isn&#8217;t in dispute is that a lot of medics have done a hard job in dangerous conditions. Their commanders fear they won&#8217;t get the recognition they&#8217;ve got coming.

Jason Chudy contributed to this report.