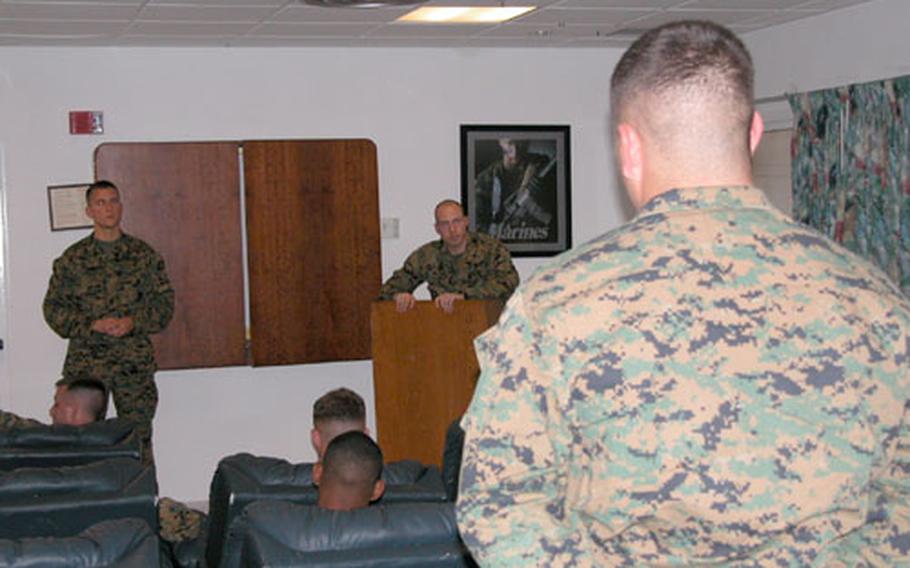 ROTA NAVAL STATION, Spain &#8212; Marines might have to get used to new ways of physical training.

Combat Conditioning was taught last week to members of the Marine Corps Security Forces Europe in Rota. The techniques are supposed to simulate marching, hand-to-hand combat and other job skills.

The Marines at Rota have been ordered to employ Combat Conditioning in their daily workouts. The rest of the corps might be next.

The program was taught by Staff Sgt. Phillip Wyman and Sgt. David Gonzales of the MCSF Training Company in Norfolk, Va. Wyman said he was scheduled to be sent next to Bahrain, Cuba and the Dominican Republic to teach Marines there about Combat Conditioning.

The old PT might have had Marines doing some quick stretches, jumping jacks and squat thrusts. Then they&#8217;d head out for a three-mile run, and that would be PT for the day.

The new method has Marines warming up their muscles before stretching them. It features exercises such as push-ups with arms in close that simulate a punch. Exercises require a tucked-in stomach, straight back, and a stance that&#8217;s solid and aggressive.

In Combat Conditioning, the precision of exercises is more important than the amount, according to Lance Cpl. Garret Ullal of Santa Cruz, Calif.

The course was taught to the Rota group over five days. The Marines had to take a 50-question written test at the end of the week, then demonstrate the new exercises they learned. They received a white binder filled with pages and a CD to study from.

Thirty of the 230 Marines in MCSF Europe took the course. Fourteen will be instructors.

The mission of MCSF Europe is in its name &#8212; security. The company is required to be ready on short notice to deploy and provide security for a ship, a base or any other asset. Last summer, for example, Marines from Rota were sent to Monrovia, Liberia, to protect the U.S. Embassy and civilians during unrest in the western African country.

The Rota Marines have different jobs but are all sentries in one way or another.