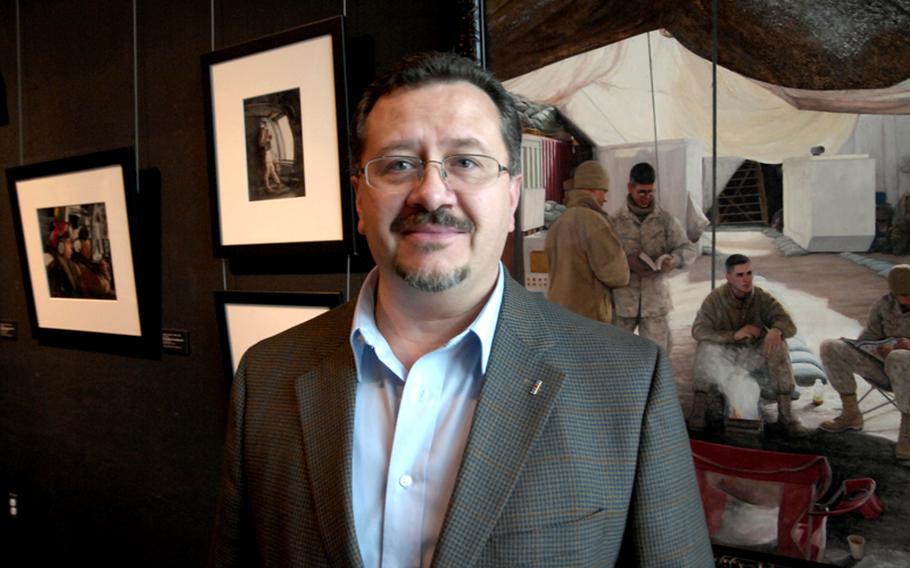 Buy Photo
Charles Grow, a retired Marine combat artist who is now deputy director of the National Museum of the Marine Corps, stands in front of some of Staff Sgt. Kristopher Battles' art at the museum in Quantico, Va. Grow says Battles ''has produced a large volume of very high-caliber work ... some of the best in the collection, in my opinion.'' (Joe Gromelski/Stars and Stripes)

Buy Photo
Charles Grow, a retired Marine combat artist who is now deputy director of the National Museum of the Marine Corps, stands in front of some of Staff Sgt. Kristopher Battles' art at the museum in Quantico, Va. Grow says Battles ''has produced a large volume of very high-caliber work ... some of the best in the collection, in my opinion.'' (Joe Gromelski/Stars and Stripes) 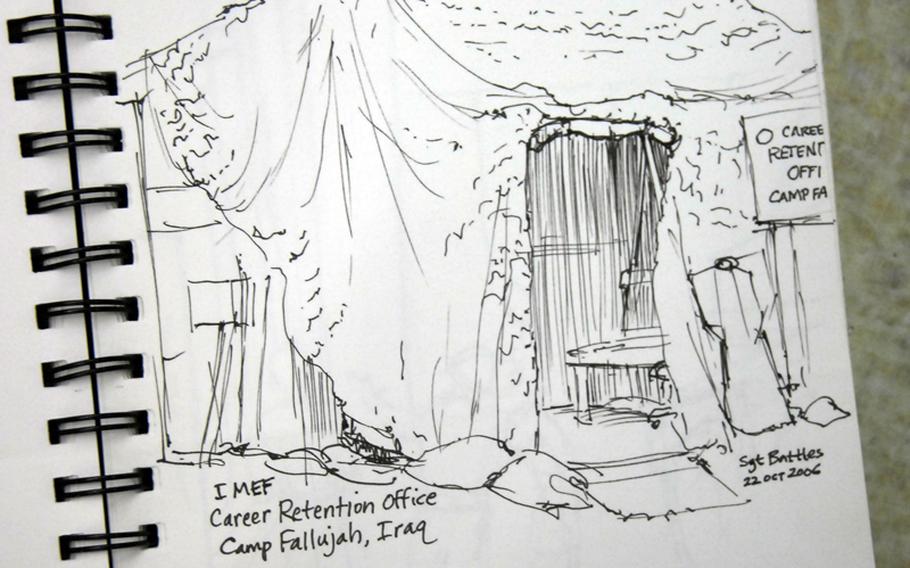 Rough sketch: Career retention office, Camp Fallujah, Iraq, by Staff Sgt. Kristopher Battles. The note at the bottom says, ''This is my 1st subject in country ...'' () 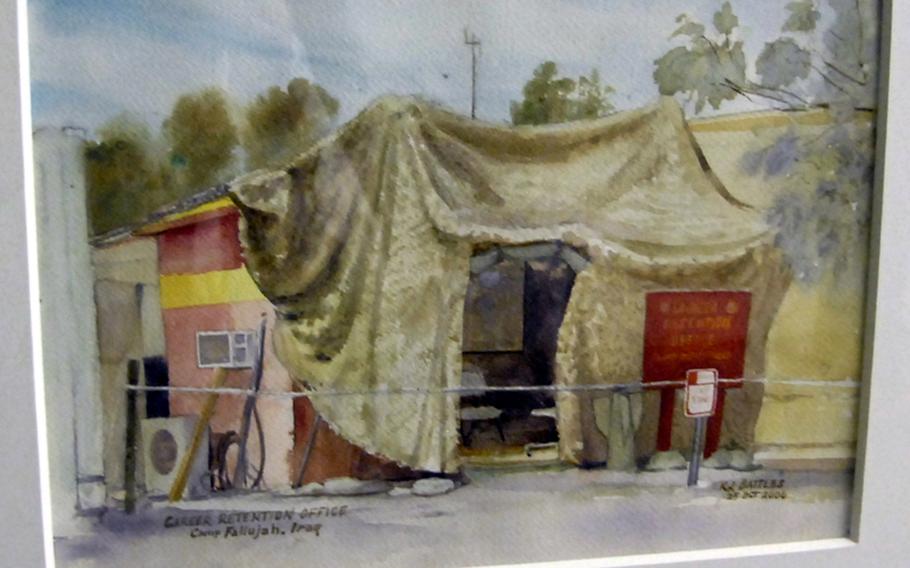 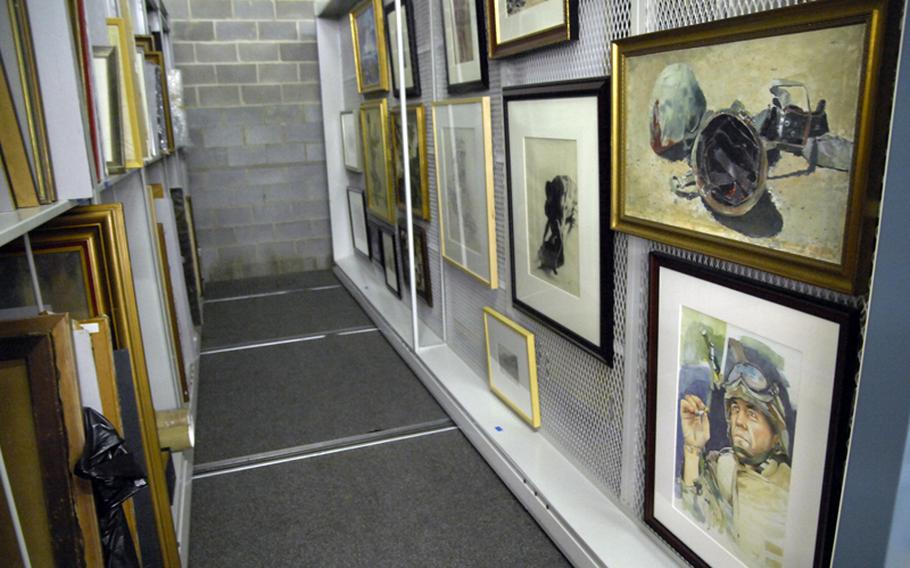 Buy Photo
Some of the National Museum of the Marine Corps' art collection in storage at a facility near Quantico, Va. (Joe Gromelski/Stars and Stripes) 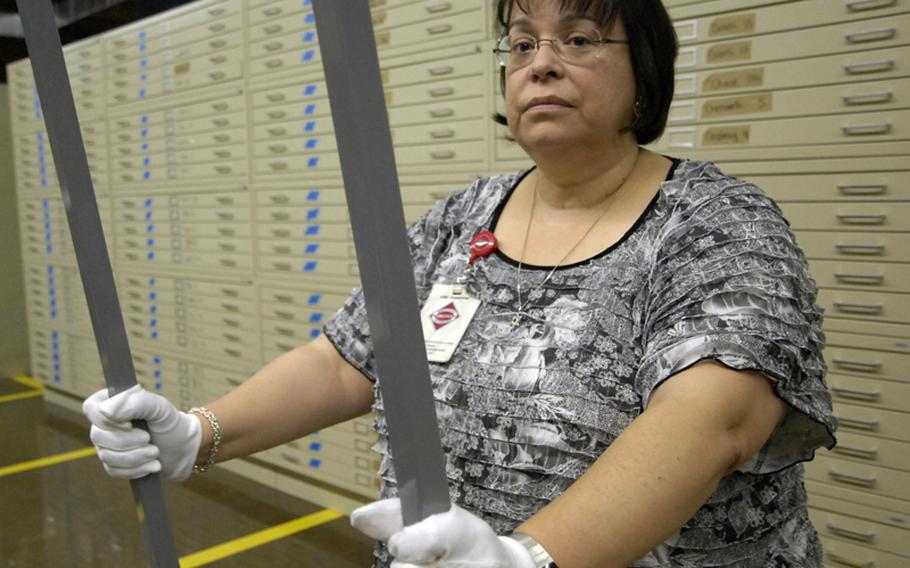 Buy Photo
Joan Thomas, an art curator at the National Museum of the Marine Corps in Quantico, Va. (Joe Gromelski/Stars and Stripes) 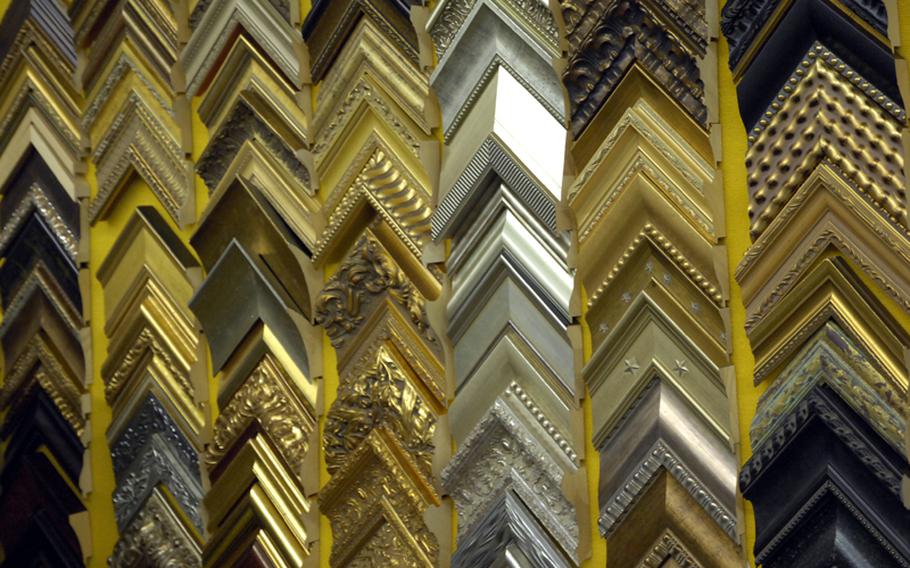 Buy Photo
61p bs August 19, 2011 Some frame samples at the National Museum of the Marine Corps' storage facility near Quantico, Va. ''It may take us 20 frames to find the right one, maybe more,'' said Joan Thomas, one of the the museum's art curators. ''It depends upon the painting and the style that the artist used for the painting. A lot of our works, an ornate, fancy frame is inappropriate. But for some of them, the ornate frame will be what pulls out elements within the painting.'' The nature of the exhibition also plays a part in frame selection, she added. (Joe Gromelski/Stars and Stripes) 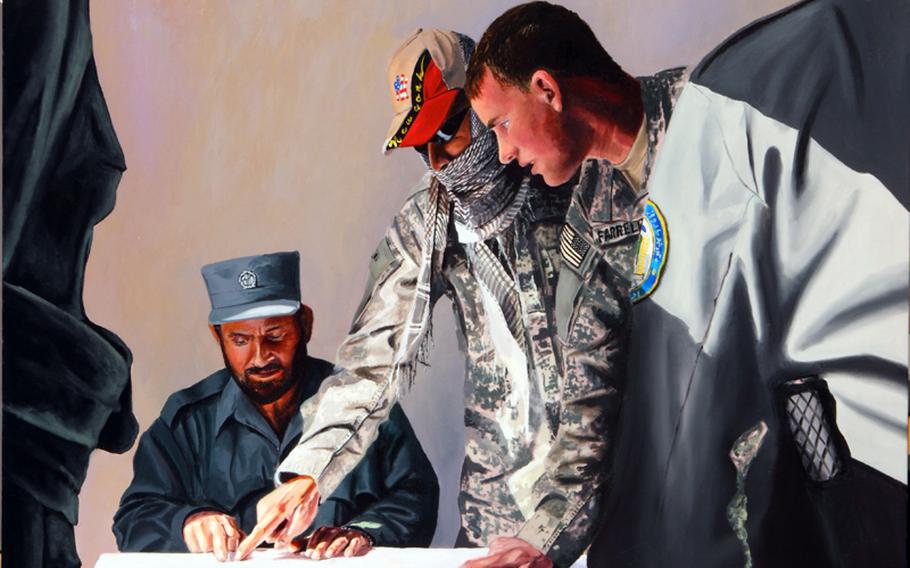 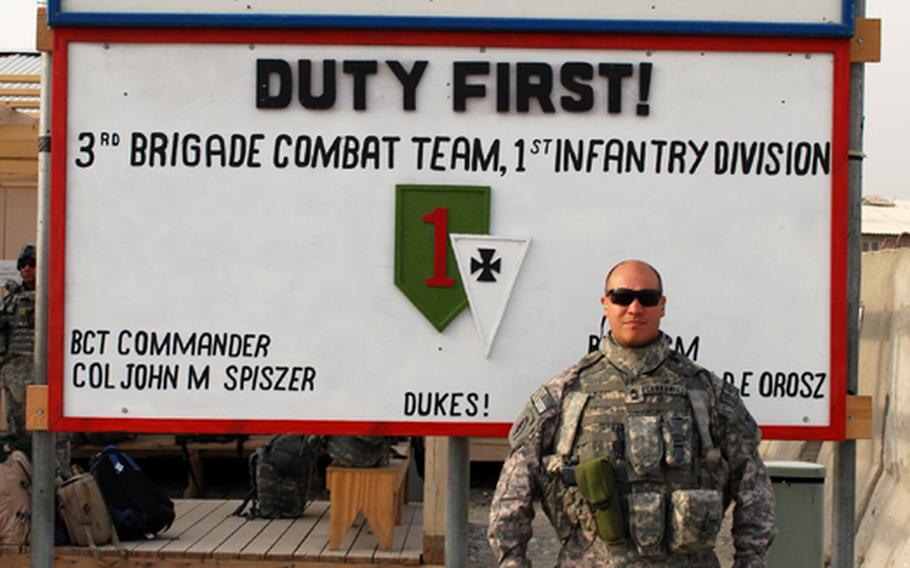 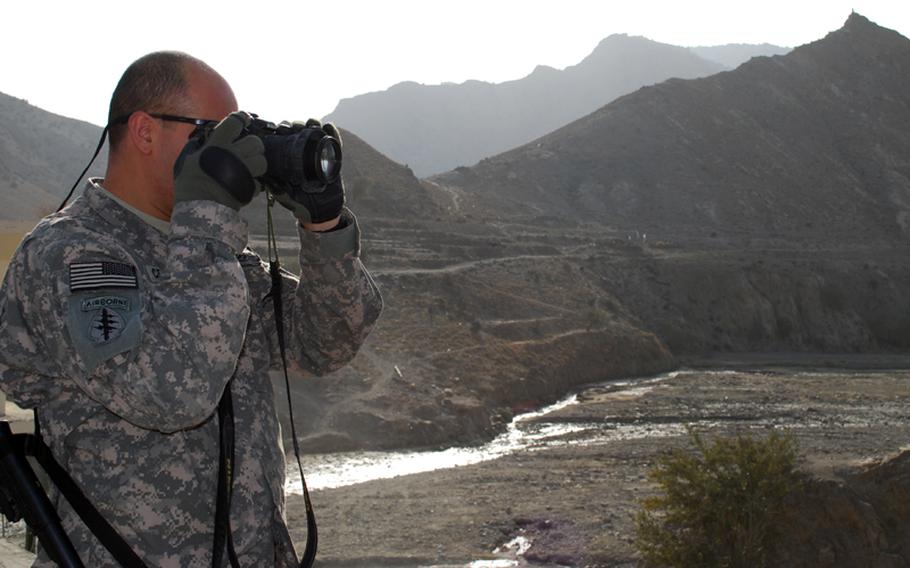 Army Master Sgt. Martin Cervantez takes pictures of soldiers on a mission during an embed in Afghanistan. Cervantez and Marine Staff Sgt. Kristopher Battles often take photos downrange, then go back to the States and produce paintings based on those impressions. (Courtesy of Martin Cervantez) 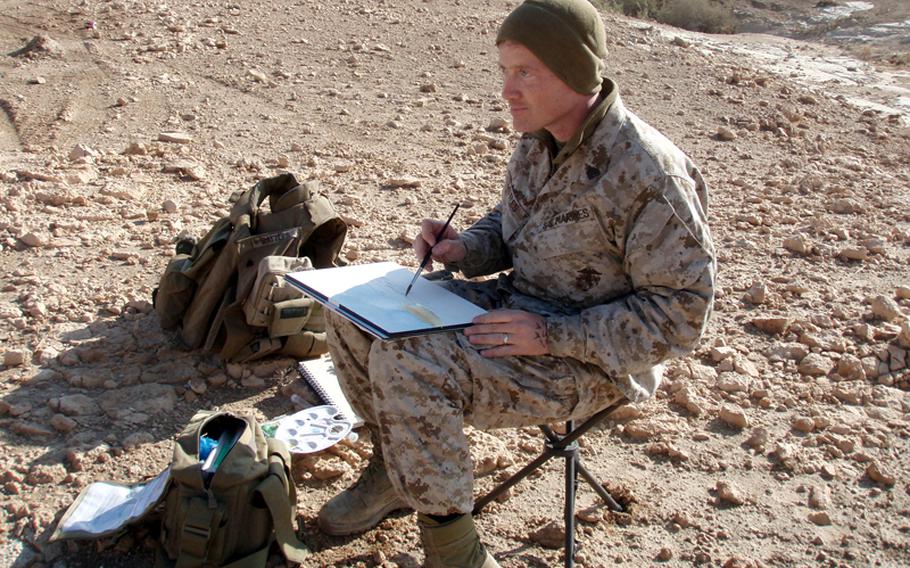 Marine Staff Sgt. Kris Battles is the only Marine on active duty today whose job is to paint other Marines. From training exercises in the States, to Iraq and Afghanistan, he chronicles the daily lives of Marines in a way many of them never expect. Here he paints a MiG at al Asad airfield, Iraq, in 2007. (Courtesy of Kris Battles) 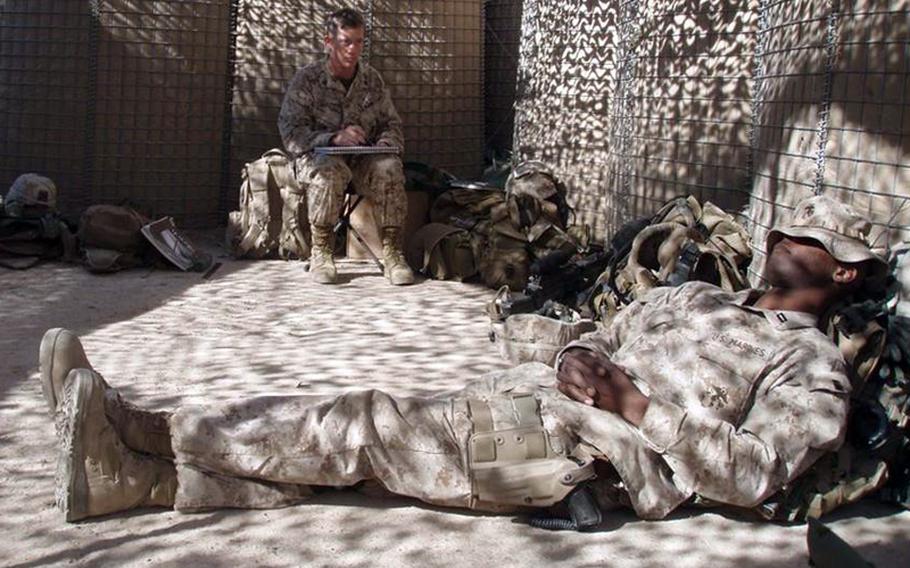 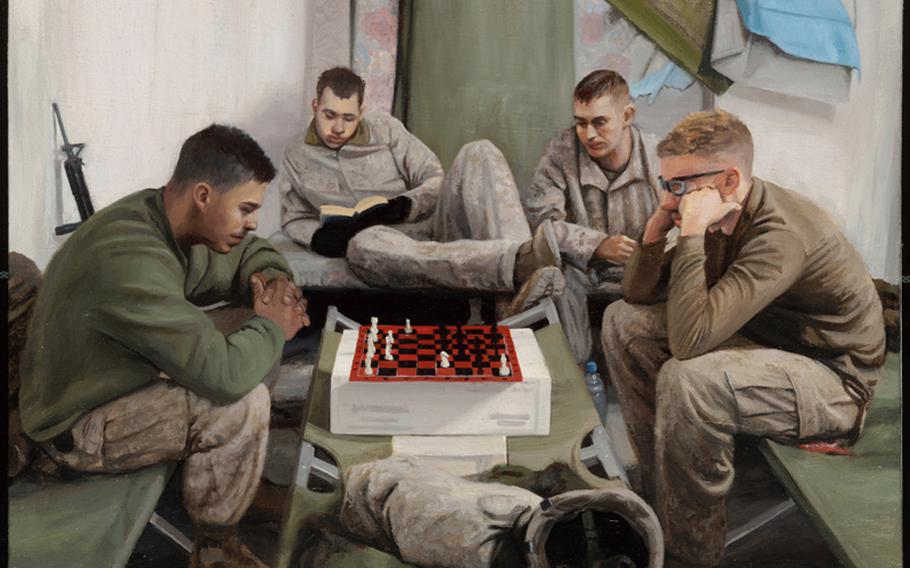 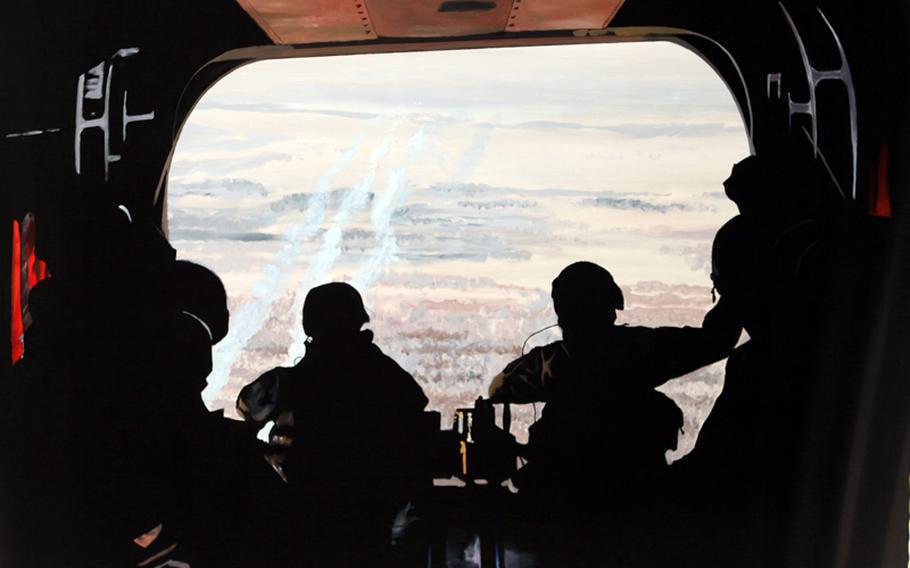 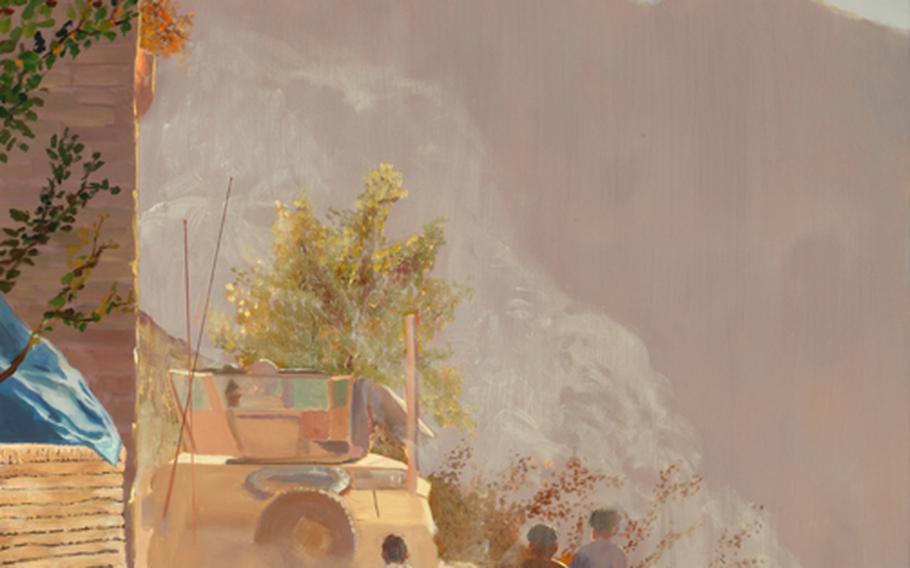 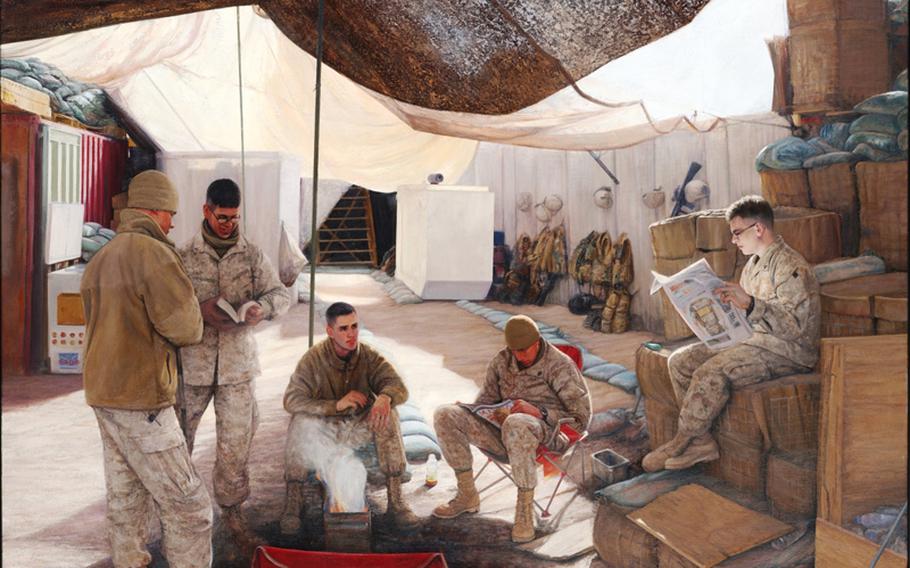 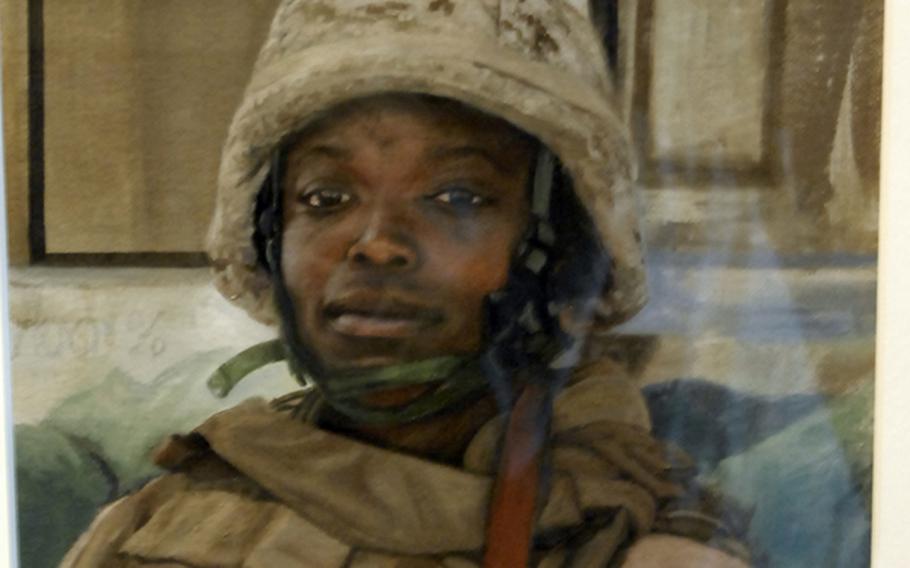 Staff Sgt. Kristopher Battles' 2007 oil painting, ''Portrait of Capt. Elizabeth Okoreeh-Baah of VMM-263, Al Asad, Iraq,'' on display at the National Museum of the Marine Corps in Quantico, Va. Former combat artist Charles Grow, now the museum's deputy director: ''I've heard lots of people say that that's good enough to be a photo, but I would argue that it's better than a photo. Take a look around the edge. There's just a few brush strokes that indicate the environment. There's a tactile, immediate, visceral visual response to this personality. And Staff Sgt. Battles' ability to paint a portrait, especially a quick study like this, is spot on. I've not seen many people better than him.'' () 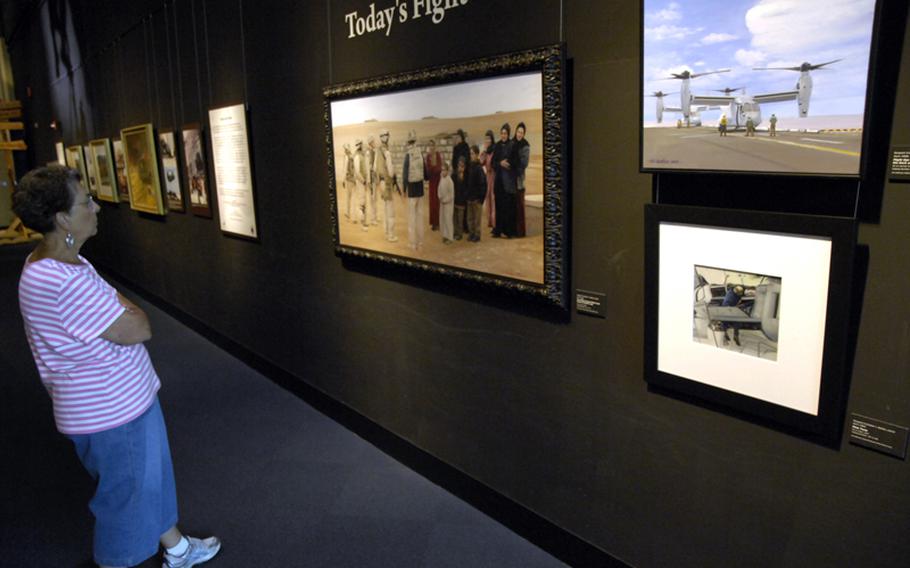 Buy Photo
A visitor to the National Museum of the Marine Corps in Quantico, Va., looks at some of the combat art of Staff Sgt. Kristopher Battles. (Joe Gromelski/Stars and Stripes)

NAPLES, Italy &mdash; Marine Corps Staff Sgt. Kristopher Battles is unsure of his technical military job category, better known as his MOS. He is literally a force of one.

Battles is a 4606: combat artist, the only active-duty Marine doing the job these days.

For combat artists like Battles &mdash; troops and civilians who chronicle their comrades&rsquo; lives through art &mdash; obscurity comes with the job. Their ranks are so sparsely populated that the average Marine, soldier, sailor or airman can be forgiven for not realizing they exist.

But the combat artist has been cataloging the lives of troops since World War I, painting wartime exploits from the trenches of Guadalcanal to Vietnam and into Iraq and Afghanistan. And despite the prevalence of digital media these days, those involved say the combat artist occupies an important niche in documenting this latest era of America at war.

Combat art officially began with Army artists in World War I, according to Sarah Forgey, art curator for the Army Center of Military History. Those first eight artists were given broad instructions.

&ldquo;I have carte blanche to paint whatever I want and [use] whatever medium I want,&rdquo; said Master Sgt. Martin Cervantez, 43, the Army&rsquo;s lone combat artist who says he has &ldquo;the best job in the Army.&rdquo;

The combat art effort really took off across the services during World War II.

Brig. Gen. Robert Denig stood up the Marine Corps&rsquo; contingent, and &ldquo;Denig&rsquo;s Demons&rdquo; were born. The Navy stood up eight combat artists during that war, while the Army had 43 civilian and soldier artists in the field.

The programs continued in varying degrees of participation through wars in Korea, Vietnam and into today. While the Army has Cervantez and the Marine Corps has Battles, the Navy and Air Force have civilians who chronicle the wartime lives of sailors and airmen.

Joan Thomas, art curator for the National Museum of the Marine Corps, said a combat artist can slow down what&rsquo;s happening and provide a unique perspective of war.

&ldquo;They&rsquo;re able to take in an entire scene, or an entire event, and distill it down into what they feel is the essence of what they&rsquo;ve seen,&rdquo; Thomas said. &ldquo;It&rsquo;s also something that is very individualistic. No two artists, even if they are standing a foot apart, are going to see the scene in the same way.&rdquo;

While the works are inherently individualistic, Cervantez said he strives for a commonality of experience in his depictions of deployed soldiers.

This is seen in paintings such as &ldquo;I Got Your Six,&rdquo; where a soldier kneels behind a Humvee and covers his buddy, or &ldquo;Tailgating Over The Valley,&rdquo; where silhouetted soldiers look out of the open back of an airborne Chinook helicopter.

&ldquo;We don&rsquo;t see our artists creating a lot of grand-scale battle scenes,&rdquo; she said. Each era has produced its own works of everyday soldier life, Forgey said, such as scenes of guys cleaning weapons.

&ldquo;People see so many photos that they tend to go right on by them,&rdquo; Cervantez said. &ldquo;But when somebody takes time to produce a piece of artwork, it means a lot more.

&ldquo;When a soldier sees my art in a gallery or a magazine or online ... it helps them tell their family or their kids what they do. &lsquo;That&rsquo;s what it looked like. That&rsquo;s what I did.&rsquo;&thinsp;&rdquo;

Cervantez&rsquo;s last trip was in the Kandahar area, bouncing around combat outposts as soon as his boots hit Afghan soil.

&ldquo;The very next day (after arriving in country) I was out on a 12-hour patrol,&rdquo; he said. &ldquo;It was absolutely great.&rdquo;

Battles and Cervantez said they mainly sketch and take photos downrange, then go back to the States to produce paintings based on those impressions. But there are some things a camera can never catch.

Cervantez tries to knock out sketches whenever possible, to get the shape or feel of a scene &mdash; within limits. He&rsquo;s done a sketch during a firefight but notes that &ldquo;it&rsquo;s not a polished piece of work.&rdquo;

&ldquo;You have to be safety- and security-conscious,&rdquo; he said. &ldquo;If people are moving, you&rsquo;re moving with them.&rdquo;

Battles, 43, has deployed twice to Iraq and once to Afghanistan but said he rarely gets to sketch outside the wire.

&ldquo;When you&rsquo;re on patrol you have to keep your eyes open,&rdquo; he said. &ldquo;The patrol is definitely not going to stop when you want to capture the ambiance of a scene.&rdquo;

Combat artists like Cervantez and Battles generally go out for three- to four-month tours, basically embedding with units, and often snap a lot of photos for future reference as well as making sketches. Good downrange sketches are highly valued and sometimes treated as finished pieces, Battles said.

He has drawn amputees in the States but has not encountered a combat casualty while downrange. He&rsquo;s unsure if that&rsquo;s something he could draw or paint.

&ldquo;Certain things you wouldn&rsquo;t want to show graphically,&rdquo; he said. &ldquo;I have not drawn that scene, but I haven&rsquo;t ruled it out.&rdquo;

Cervantez said the immensity of the job hit him when he reported for duty.

Both men said getting to showcase the lives of soldiers and Marines is important.

&ldquo;Young Marines, if they are in a situation where it&rsquo;s a little bit bleak or dingy or dreary, if they see the Marine Corps cares enough about them to send artists to sketch their portrait or their daily lives in the combat zone, that&rsquo;s a morale builder,&rdquo; Battles said. &ldquo;I get to show them they&rsquo;re important.&rdquo;