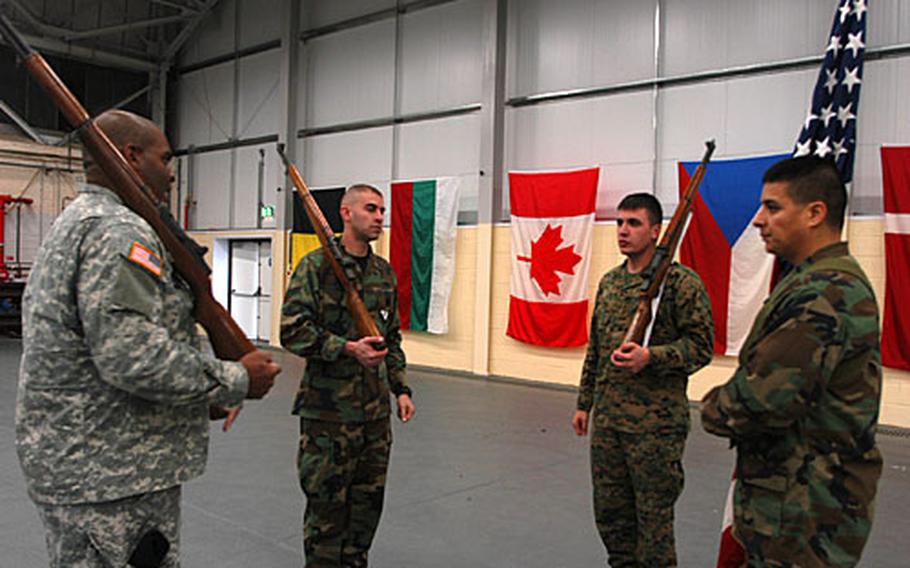 Along with Army Staff Sgt. Warren Swan, who sports a shaved head and already has his dress uniform prepped, the four are readying for a performance before some 90,000 spectators.

The four-man detail from this Air Force installation will serve as the color guard at Sunday&#8217;s NFL game between the New York Giants and Miami Dolphins at London&#8217;s Wembley Stadium.

The first NFL regular-season game to be played outside of North America has been sold out for months and the television audience will likely include millions of fans as well as a handful of family members in the United States.

As is typical in England, the weather forecast warns of the possibility of heavy rains. But that has not dampened the spirit of the color guard members.

The joint color guard is part of an American military contingent participating pre-game activities. Two F-15s from RAF Lakenheath and a KC-135 Stratotanker from RAF Mildenhall also will be part of the show.

First, two RAF Eurofighter Typhoons will torch the skies above Wembley to commence the multinational flyover.

Then the KC-135, flown by Capt. Kevin Parsons and Capt. Darin Dial, will follow, accompanied by the F-15C fighter jets flying off the Stratotanker&#8217;s wings.

Maj. Courtney Hamilton and Capt. David Anderson, both of the 493rd Fighter Squadron, are slated to fly the F-15Cs.

Dial planned the operation, which included flying over Wembley Stadium in a helicopter to perform reconnaissance on the site.

The pilots are likely to be back on the ground in Suffolk before the end of the first quarter while at least two of the color guard members will get to stay through the entire game.

Two others, however, will have to escort the M-16 automatic rifles back to RAF Molesworth.

COBHAM, England &#8212; Sunday&#8217;s NFL game at Wembley Stadium will be the first time many of the athletes on the field compete outside of the United States.

But for a handful of players with ties to the military, Sunday&#8217;s game marks a return to familiar territory.

Pro Bowl defensive end Michael Strahan is the son of a retired Army sergeant major and spent five years of his childhood in Mannheim, Germany.

Strahan, who holds the single-season sack record with 22.5 sacks, was part of an NFL contingent that visited Landstuhl Regional Medical Center in Germany last year to meet with wounded troops.

Strahan&#8217;s teammate, place kicker Lawrence Tynes, was born in Greenock, Scotland, and spent much of his childhood in the United Kingdom while his father was stationed in Scotland with the U.S. Navy.

His brother served in Iraq.