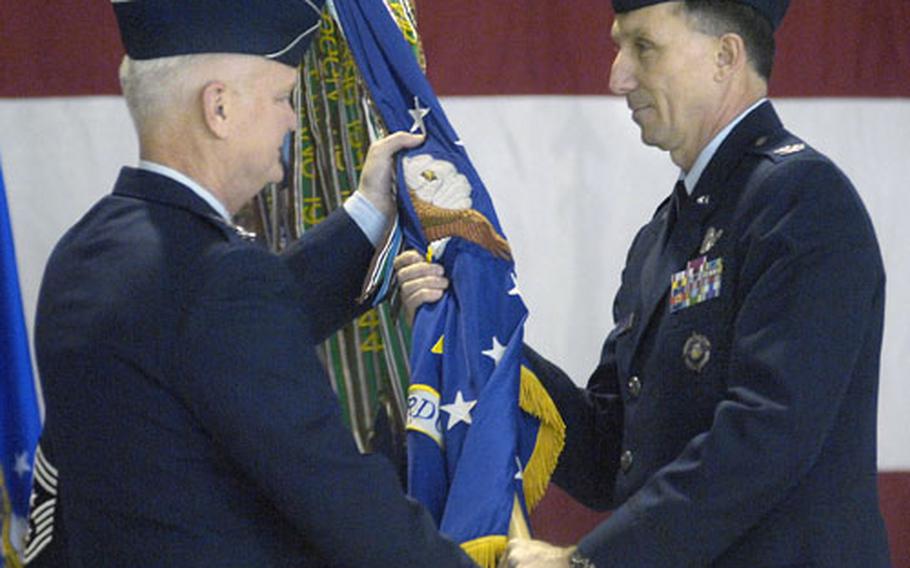 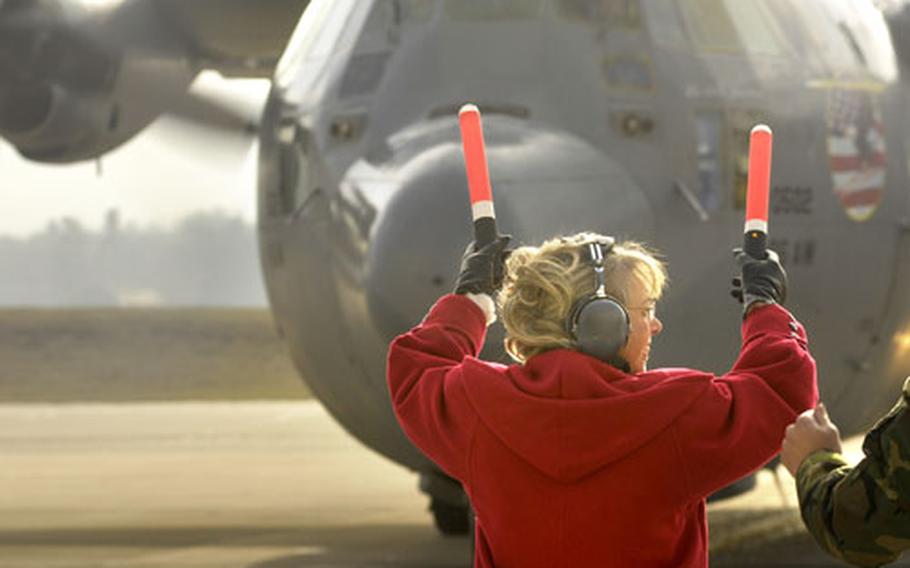 Terry Johnston marshals in the C-130 piloted by her husband, Brig. Gen. Rich Johnston, on his final flight Monday at Ramstein Air Base, Germany. Her husband relinquished command of the 86th Airlift Wing and Kaiserslautern Military Community on Wednesday to Col. William Bender. Airman 1st Class Jason Ricke, a C-130 crew chief assigned to the 86th Aircraft Maintenance Squadron, assisted Terry Johnston with marshaling the aircraft. Aircrew members traditionally get hosed down with water after completing their final flight in a unit. (Ben Bloker / S&S) KAISERSLAUTERN, Germany &#8212; Col. William J. Bender assumed control of the 86th Airlift Wing on Wednesday during a change of command at Ramstein Air Base, where airmen gathered for a ceremony of traditional military pomp.

Bender, a command pilot with more than 4,000 flight hours, previously served as executive officer to the deputy commander of the European Command in Stuttgart. Before that, Bender commanded the 319th Air Refueling Wing at Grand Forks Air Force Base in North Dakota.

&#8220;I am absolutely thrilled to have this opportunity to command this great wing,&#8221; Bender said.

The ceremony was attended by a host of German and military dignitaries, including Gen. William E. Ward, whom Bender worked under at EUCOM.

For Bender, the new position means he will lead a wing of four groups, 16 squadrons and three bases in Germany, Spain and Belgium.

Bender said his goal is to press forward with the progress achieved during Johnston&#8217;s tenure as commander of both the 86th and the Kaiserslautern Military Community, home to some 53,000 Americans.

The 86th Airlift Wing conducts a variety of airlift, airdrop and evacuation operations in support of humanitarian efforts around the world and the wars in the Mideast.

Bender said his goal is to maximize resources during a time of tightening budgets.

Delivering needed supplies to war zone commanders will continue to be the primary mission, he said.

During his speech, Bender talked about the sacrifices of war and the economic burden on the nation, such as a mounting debt and falling dollar. However, the sacrifices are necessary, he said.

&#8220;I ask you to consider what is really at stake. To answer my own rhetorical question: Everything,&#8221; Bender told his airmen.