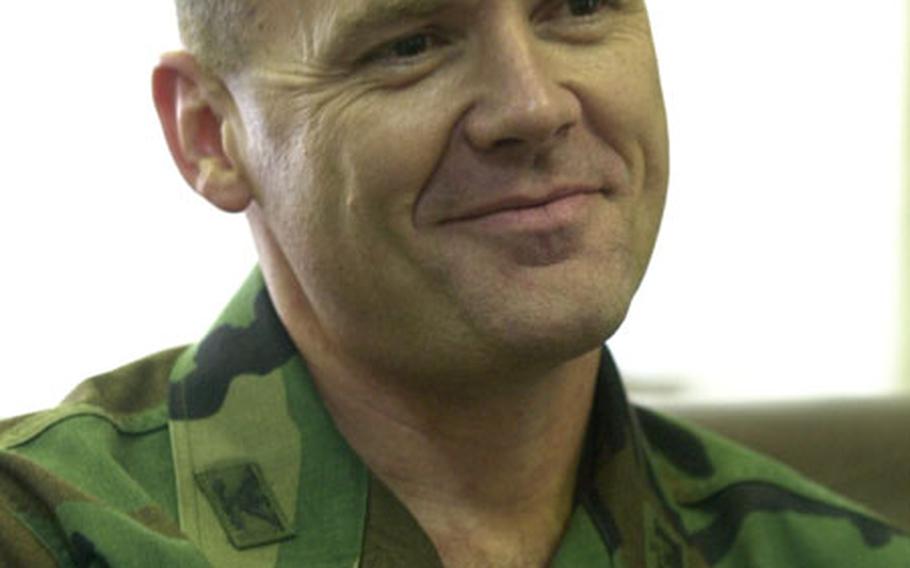 As commander of U.S. Army Garrison, Japan, Williams oversees a handful of Army installations including Camp Zama, and will guide the Army here through one of its most major transformations in recent years.

Williams has served as a tactical commander during much of his 22-year career. Coming to Japan and commanding a group of installations hadn&#8217;t crossed his mind, he said.

He took over the command this month from Col. Gary A. Longhany.

Williams, 43, has a big job ahead: not only running the post, but completing the nuts and bolts of the Army&#8217;s Transformation of Installation Management, the process that changes how Army leaders fund their operations. He also must support the mission command.

Formerly, the command&#8217;s funding came from one source and paid for both doing the mission and maintaining the garrison. Now funding comes from two sources, one for the mission, the other for the garrison.

The change prevents needs in one category &#8212; usually mission &#8212; from usurping the money for buildings and infrastructure.

As garrison commander, Williams can use the garrison&#8217;s budget to improve quality of life for soldiers.

In his new job, Williams is a brigade-level commander in charge of a handful of servicemembers, hundreds of U.S. civilians and thousands of Master Labor Contract workers.

He supplies facilities for soldiers and their families, provides force protection and maintains relations with local host nation leaders. &#8220;I am the mayor, that is the easiest way to look at it,&#8221; he said.

Williams began his career studying pre-law and journalism at Auburn University before being commissioned in the Army Corps of Engineers.

He later attended graduate school at Duke University and earned his master&#8217;s degree and doctorate in political science. He recently completed a Senior Service College Fellowship at the U.S. Institute of Peace in Washington, concentrating on post-conflict resolution. He wrote a book, &#8220;Post Conflict Reconstruction: On the Critical Path to Long-Term Peace,&#8221; to be published later this year.

In 2001, he began an assignment at the Pentagon as the military assistant to the assistant secretary of the Army for civil works. He was there on Sept. 11 when terrorists smashed a jet into the building about 100 yards from his office. The sound rocked the structure, he said.

Williams came to Japan from Washington with his wife and two daughters. He&#8217;ll remain at the job for two years, or three years if he extends, he said.