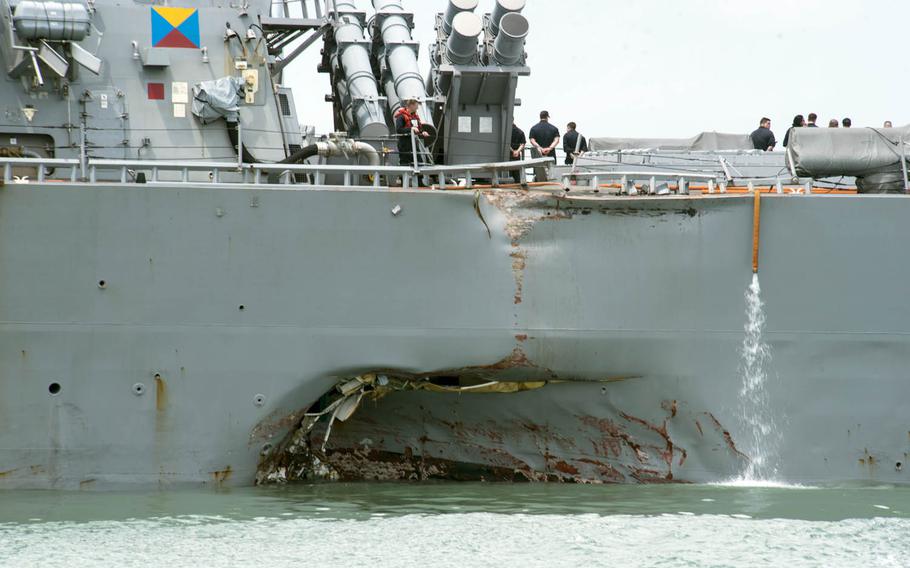 YOKOSUKA NAVAL BASE, Japan — The USS John S. McCain will head back to its homeport in Japan for a damage assessment later this month, Naval Sea Systems Command announced Wednesday.

The ship limped into Changi Naval Base, Singapore, with a hole in its port side after an Aug. 21 collision with a merchant ship east of the city-state that killed 10 sailors.

The Navy plans to take the McCain to Yokosuka Naval Base using a heavy lift ship. The move will allow crew to be with their families while a damage assessment determines “repair plans to include cost, schedule and location for the ship’s repairs,” NAVSEA said in a statement.

It’s unclear if the Navy has the facilities and dry dock space to fix the guided-missile destroyer in Yokosuka.

The McCain’s sister ship, the USS Fitzgerald, damaged in a June 17 collision with another merchant vessel off Japan that killed seven sailors, is heading stateside because its repairs would tie up dry dock space at Yokosuka, the Navy said.

The U.S. military community in Singapore is supporting the McCain’s crew, which is still there with the ship, said 7th Fleet spokesman Cmdr. Clay Doss.

“They’re not sitting idle,” he said of the crew. “They’re standing watches … they are doing as normal of an in-port routine as they possibly can.”

A memorial ceremony for the lost McCain sailors may be held at Yokosuka in coming weeks, Doss added.