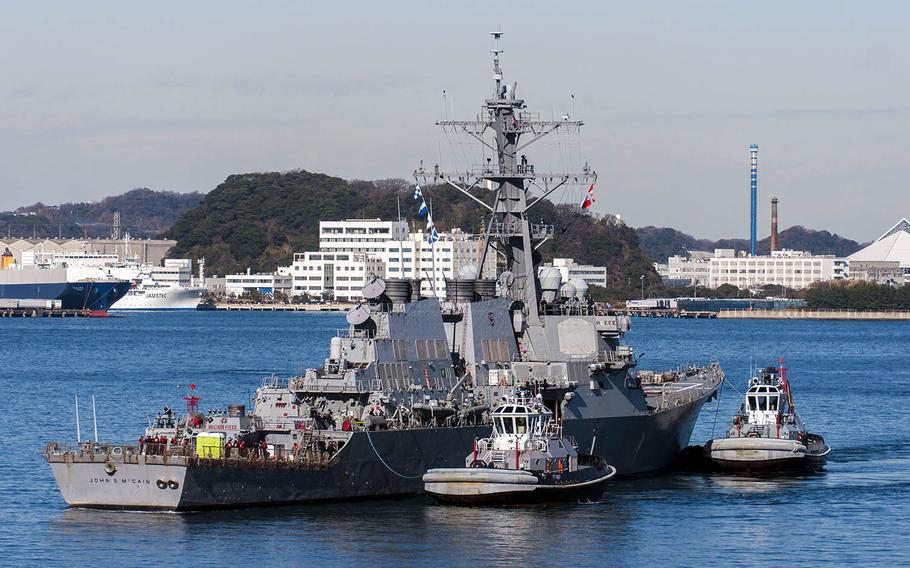 The USS John S. McCain is back at Yokosuka Naval Base, Japan, to receive repairs for damage suffered in a deadly Aug. 21 collision near Singapore.

Ten sailors were killed and five were injured when the Arleigh Burke-class guided-missile destroyer crashed into an oil tanker east of the Straits of Malacca.

The ship will undergo extensive maintenance at the U.S. Naval Ship Repair Facility and Japan Regional Maintenance Center, the Navy said in a statement issued on Nov. 28.

“[The facility] is making preparations to begin remediation and repair efforts immediately once the ship is dockside,” Lt. Cmdr. Sandra Wyman, a Navy spokeswoman, said in the statement. “The project will be one of the largest [the facility] has undertaken.”

After the collision, the McCain sailed under its own power to Changi Naval Base, Singapore, where crew members, technicians and divers recovered remains, assessed damage and prepared the ship for travel by patching sections of the hull and performing maintenance on key systems.

The McCain left Singapore Oct. 5 aboard the heavy lift ship MV Treasure heading for Yokosuka, but diverted to Subic Bay, Philippines, after a new crack was discovered on its starboard side.

At Subic Bay, extra support was added to the stricken vessel aboard the Treasure, which departed for Yokosuka on Nov. 28, the Navy said.

The ship arrived at Tokyo Bay Dec. 5, but couldn’t dock at nearby Yokosuka until the crew prepared it for a safe offload.

The vessel anchored near its sister ship, the USS Fitzgerald, which left Yokosuka on Dec. 8. It’s bound for Ingalls Shipbuilding facility in Pascagoula, Miss., to repair damage caused by a June 17 collision with a container ship that killed seven of its sailors.