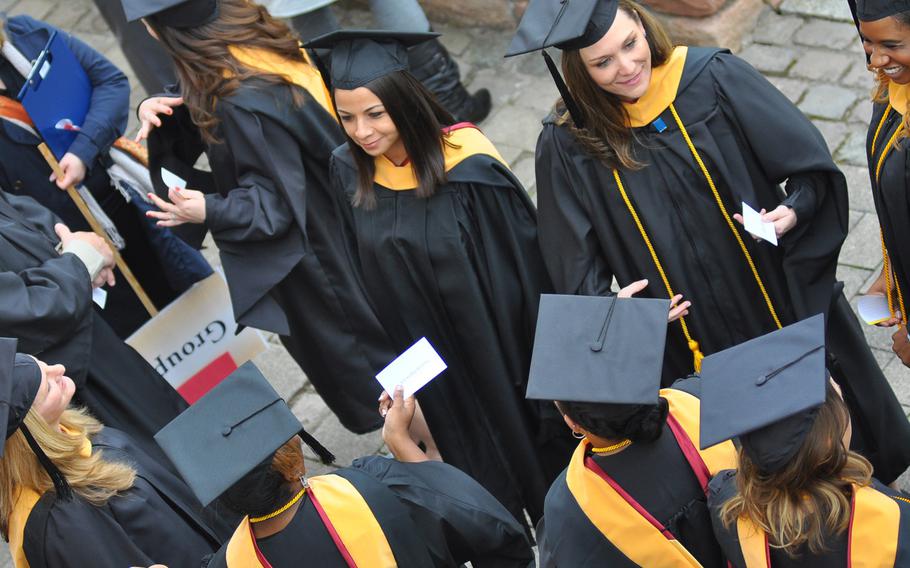 About 200 graduates participated in the University of Maryland University College commencement ceremony last spring in Kaiserslautern, Germany. UMUC announced on Thursday, Feb. 9, 2017, that it will continue to offer classes to U.S. troops in the Middle East and Africa. (Jennifer H. Svan/Stars and Stripes)

KAISERSLAUTERN, Germany – The Defense Department has awarded the University of Maryland University College a $16.2 million contract to continue delivering educational services to U.S. troops serving in the Middle East and Africa, the school said.

The 54-month contract calls for UMUC to provide instructional undergraduate, graduate and post-graduate programs and education support services for the Marine Corps, Army, Air Force, Navy and Coast Guard in the U.S. Central Command and in the U.S. Africa Command areas of responsibility, according to the DOD announcement of the contract.

Students at those locations will have access to on-site and online courses, as well as testing services, UMUC said in a statement released late Thursday.

The contract extends through the 2020-21 academic year.

“UMUC continues to be the primary education service provider for U.S. military personnel deployed around the world,” Lloyd Miles, a retired Army general and senior vice president for UMUC’s global military operations, said in a statement. “The awarding of this contract is clear affirmation of the dedication of our faculty and staff abroad and a university-wide commitment to those who serve and sacrifice to protect us.”

UMUC also announced that in addition to undergraduate liberal arts programs, servicemembers and eligible civilians for the first time will be able to take classes and earn a Master of Business Administration at the U.S. naval base in Bahrain.

UMUC holds contracts to offer instruction in Europe through 2023 and in Asia through 2022.