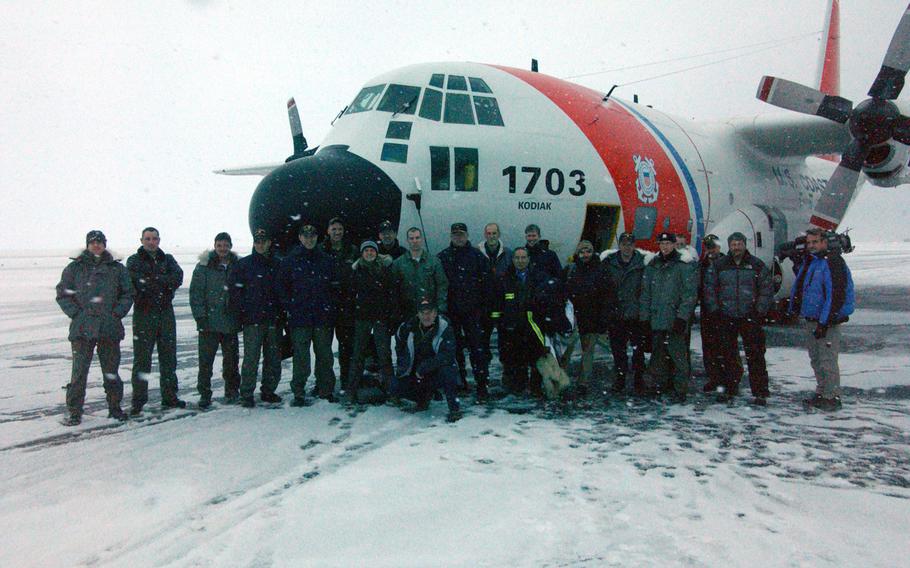 The 22 passengers and crew of Coast Guard HC-130 Hercules airplane 1703 stand for a group photo after successfully reaching the North Pole in 2008. As countries race to gain mineral rights to the Arctic Circle, the U.S. lags behind potential competitor Russia, which is better equipped to traverse the icy region. For instance, the U.S. Navy hasn't has tried to reach the North Pole in the last four years. (Courtesy of U.S. Coast Guard)

The 22 passengers and crew of Coast Guard HC-130 Hercules airplane 1703 stand for a group photo after successfully reaching the North Pole in 2008. As countries race to gain mineral rights to the Arctic Circle, the U.S. lags behind potential competitor Russia, which is better equipped to traverse the icy region. For instance, the U.S. Navy hasn't has tried to reach the North Pole in the last four years. (Courtesy of U.S. Coast Guard) 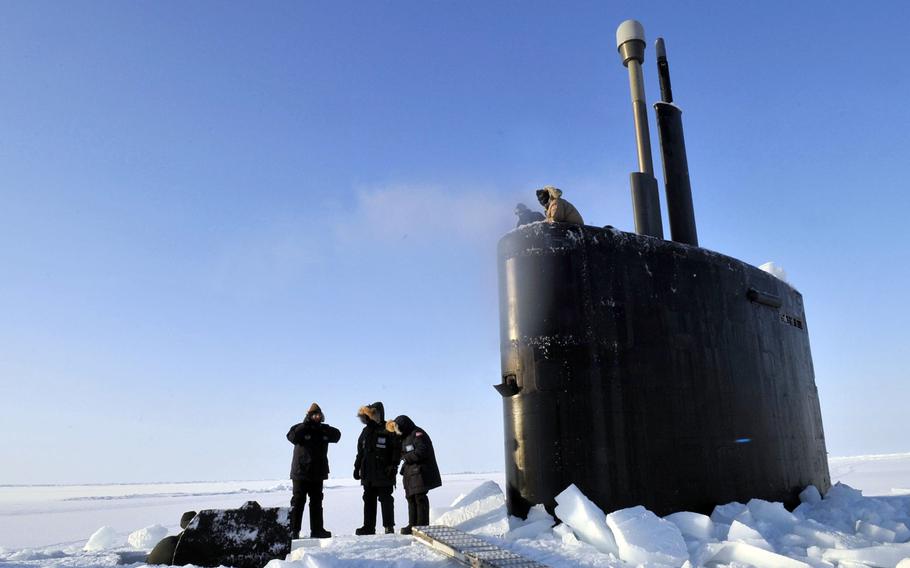 Members of the Applied Physics Laboratory Ice Station clear ice from the hatch of the Los Angeles-class submarine USS Annapolis after the sub broke through the ice while participating in Ice Exercise 2009 in the Arctic Ocean. The Navy hasn't tried to break through the ice at the top of the world since 2011. (Courtesy of U.S. Navy) 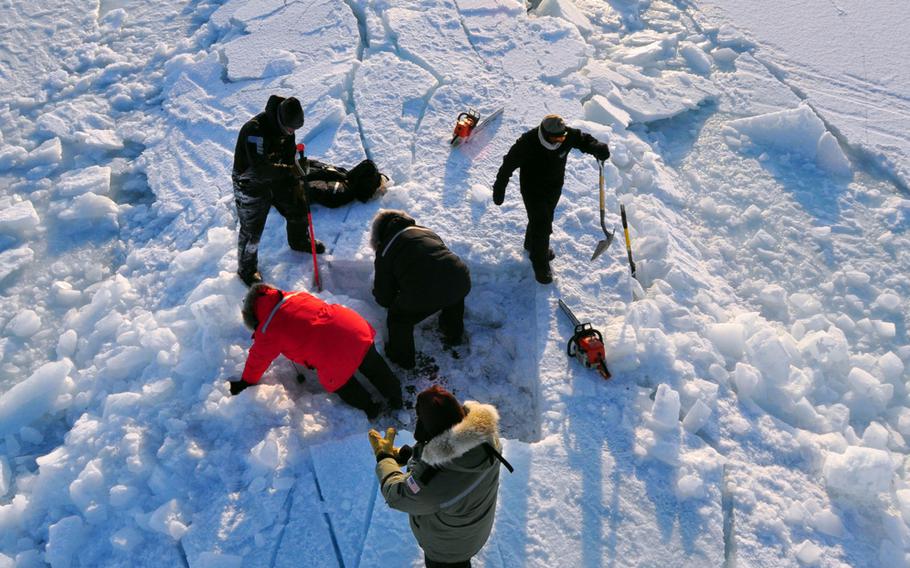 Members of the Applied Physics Laboratory Ice Station clear ice from the hatch of the Los Angeles-class submarine USS Annapolis after the sub broke through the ice while participating in Ice Exercise 2009 in the Arctic Ocean. The crews of the Annapolis and the Los Angeles-class attack submarine USS Helena were learning to operate in the challenging and unique environment that characterizes the Arctic region. (Courtesy of U.S. Navy) 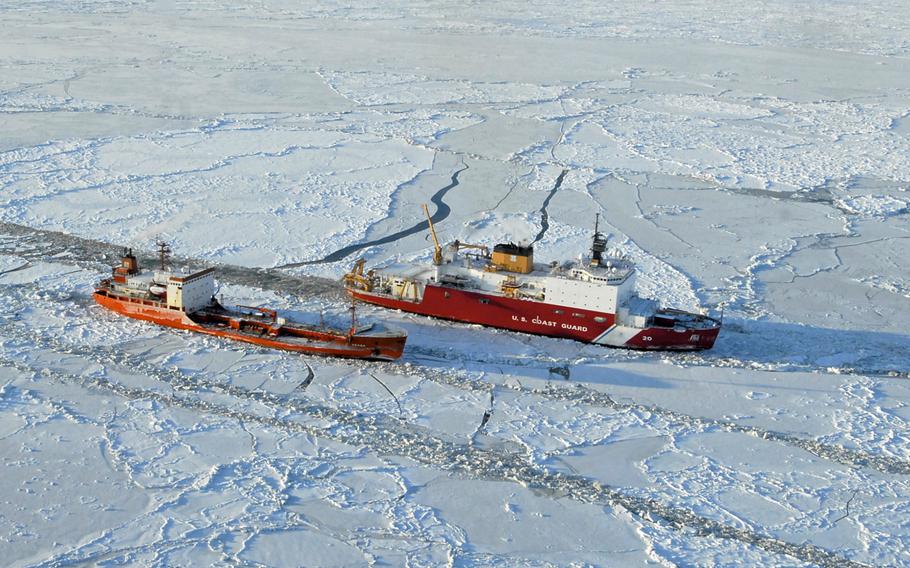 The Coast Guard Cutter Healy breaks ice around the Russian-flagged tanker Renda 250 miles south of Nome, Alaska, on Jan. 6, 2012. The Healy is the U.S. military's only operating polar icebreaker. Russia, on the other hand, has the world's largest fleet of icebreakers, essential to a region rich with natural resources. (Courtesy of U.S. Coast Guard) 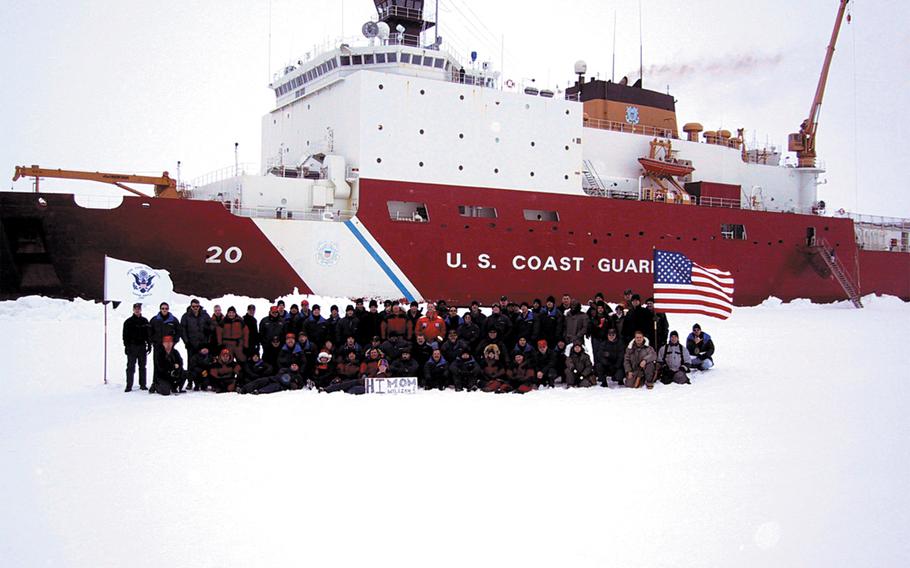 The Coast Guard Cutter Healy's crew poses in front of the cutter after reaching the North Pole on Sept. 6, 2002. The Healy -- the U.S. millitary's only icebreaker -- became only the second U.S. surface ship to reach the North Pole. (Courtesy of U.S. Coast Guard) 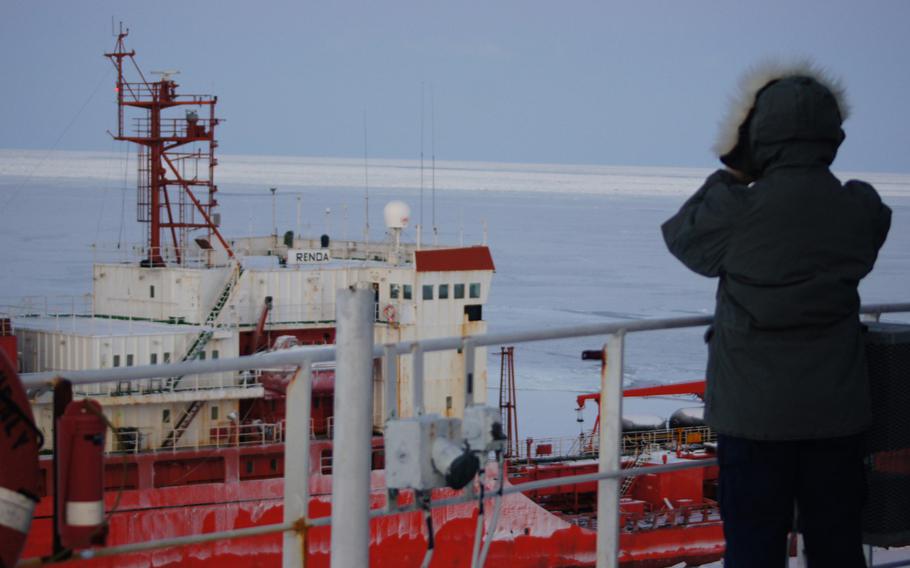 A Coast Guard Cutter Healy crewmember takes a moment to watch the Russian-flagged tanker Renda steam through the ice in the North Bering Sea while the cutter crew escorts the tanker to Nome on Jan. 6, 2012. (Courtesy of U.S. Coast Guard)

ANCHORAGE, Alaska — Alaska was known as Russian America before the Russian Empire sold it to the U.S. government in 1867.

The Russians built their North American colonies to tap into a rich fur-seal trade. When they sold the land for $7.2 million — after more than a century of occupation — the Russians were under financial duress and in fear of losing the territory in a future conflict with the British, with whom they fought the Crimean War in 1853-56.

Today the financial pressure is back, in the form of falling oil prices and Western sanctions after Russia’s annexation of Ukraine’s Crimea peninsula, and the quest for arctic resources is growing more intense. These days it’s oil and gas, rare earth elements and fisheries that are at stake in the far north.

Russia wasn’t the focus of a February meeting of cold weather warfare experts from the U.S. and several allied nations at the Northern Warfare Training Center in Black Rapids, Alaska. But it was hard to ignore the bear in the room during the talks as fighting raged in Ukraine.

“We train our soldiers for potential contingencies,” said the center’s commandant, Lt. Col. Mark Adams, 45, of West Farmington, Ohio. “That could be Korea … I hate to use the word Ukraine. Anywhere that is cold.”

One of those at the meeting — Steve Gardner, academic director at the Marine Corps Mountain Warfare Training Center in California — pointed out that the Russians were remilitarizing Wrangel Island off the northeast coast of Siberia. A Russian radar installation started operations on the island in October, according to the Alaska Dispatch News.

“That is right across from Alaska,” Gardner said.

The Russians are building two arctic infantry brigades, he added. Russian officials said, in 2012, that the brigades, equipped with vehicles for moving troops across snow, would be stationed at Murmansk and Arkhangelsk, near Scandanavia, beginning this year.

By contrast, America’s capabilities in the region are in decline.

The U.S. Army is increasing the tempo of cold-weather training for its own troops after more than a decade of desert and urban combat. At the same time, however, it’s considering withdrawing the bulk of its forces from Alaska to meet budget targets mandated under the Budget Control Act of 2011, commonly known as sequestration.

Even if they stay in the region, the Army and the Marine Corps lack over-the-snow vehicles needed to fight in the Arctic. Their small unit support vehicles, known as SUSVs, are decades old and on their last legs with no replacements in sight, Gardner said.

“I don’t think soldiers from Fort Wainwright have ever gone north to reinforce Prudhoe Bay,” he added.

Russia also has the world’s largest fleet of ice-breakers, including a half- dozen massive, nuclear-powered vessels. It’s used some of them to open new, lucrative trade routes along its northern coast linking ports in Asia and Europe.

“We have zero ice breakers in the U.S. Navy,” said Gardner. “There’s only one heavy and one medium icebreaker operational with the Coast Guard. Nome (a port town on the Seward Peninsula that lacks road links to most other parts of Alaska) had to have a Russian [ice-strengthened tanker] come in recently (to deliver emergency fuel).”

Only a few of the Navy’s submarines are capable of breaking through ice, and the capability hasn’t been tested since 2011, he said.

Experts don’t think there’s much chance of outright war in the far north, but there are plenty of reasons to be engaged there, says David Johnson, director of the Center for Advanced Defense Studies in Washington, D.C. and a former Army officer.

The Army has trained in Alaska for decades, but outdoor and cold-weather survival skills are less common among young Americans as more and more people move to cities, he said.

“Some of these skills could be lost if we don’t institutionalize them,” he said.

Those skills will be needed to maintain a presence in a region where there will be will be increasing competition for natural resources.

“Whether you think the ice cap is growing, shrinking or moving, as nations get more access there will be competition for resources,” he said. “We are developing technologies to access those resources.”

The competition in the north mirrors what’s going on to the south, where China and its neighbors are at odds over rights to oil, gas, fish and minerals beneath the seas. China describes itself as a “near-arctic nation,” and in 2013, it gained observer status at the Arctic Council — a forum for nations with claims to the region.

The Arctic is covered by the U.N. Convention on the Law of the Sea — a treaty that the U.S. has yet to ratify — which expands state sovereignty to encompass 200-nautical-mile economic zones. It could potentially make possible claims extending out to the edge of undersea continental shelves. However, the treaty has many ambiguities which could result in overlapping claims and disputes.

Arctic nations, including Russia and the U.S., are aggressively mapping and surveying areas where they believe they have claims, Johnson said.

“Russia is claiming terrain that is based on a ridge that runs right through the middle of the Arctic,” he said.

The Russians made that clear in 2007 by planting a flag on the seabed beneath the North Pole. Russian territory accounts for roughly half of all arctic land, and the country is making its case for including wide swaths of seabed as part of its continental shelf.

Trade and air routes through the arctic are also potential sources of conflict, Johnson said.

“It is the shortest distance over the top of the earth,” he said. “Control of air and seas is going to be important in the future, especially as technology and climate change make routes more accessible.”

Mastery of trade routes has been of vital interest to the U.S. since the Navy went to war with Barbary pirates from North Africa at the dawn of the 19th Century, Johnson said.

“The Arctic is an area of contention and it’s going to be more so in the future,” he said.