U.S. Air Force Maj. Gen. John Williams, Mobilization Assistant to the commander, U.S. Air Forces in Europe- Air Forces Africa, salutes the Swedish pilots who were awarded the U.S. Air Medal in Stockholm, Sweden, on Nov. 28, 2018. Gen. Williams thanked the four pilots who risked their lives to save an SR-71 and the two Americans on board in 1987. (Kelly O'Connor/U.S. Air Force)

U.S. Air Force Maj. Gen. John Williams, Mobilization Assistant to the commander, U.S. Air Forces in Europe- Air Forces Africa, salutes the Swedish pilots who were awarded the U.S. Air Medal in Stockholm, Sweden, on Nov. 28, 2018. Gen. Williams thanked the four pilots who risked their lives to save an SR-71 and the two Americans on board in 1987. (Kelly O'Connor/U.S. Air Force) 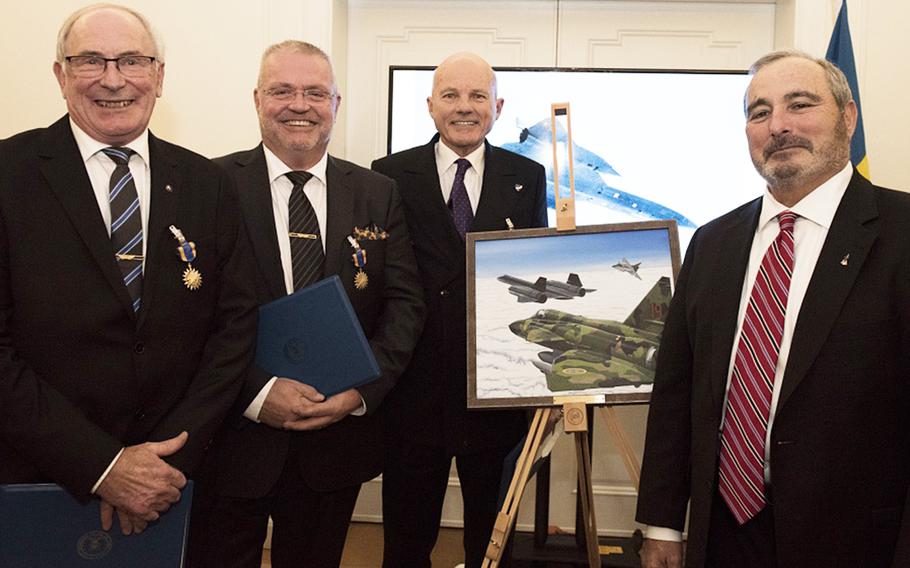 KAISERSLAUTERN, Germany — For nearly 30 years, retired U.S. Air Force flyers Tom Veltri and Duane Noll wondered about the four pilots from neutral Sweden they credit with saving their lives during the Cold War.

On June 29, 1987, Veltri and Noll, who have both retired as lieutenant colonels, felt like sitting ducks in their crippled Lockheed SR-71 Blackbird aircraft over the Baltic Sea, after one of the plane’s engines blew up.

After rapidly descending, they were forced to fly low and slow in the top-of-the-line strategic reconnaissance plane that was capable of flying at more than three times the speed of sound. At its best, the iconic plane flew too high and too fast to be intercepted by fighter jets or shot down by anti-aircraft missiles.

But now the hobbled Blackbird was easy prey for any Soviet fighters who could find them.

Fortunately for Veltri and Noll, Swedish fighters arrived on scene before the Soviets and escorted them all the way to Denmark. The two never found out the names of the pilots involved until this past year, when the mission was finally declassified.

This week, Veltri met three of the Swedish pilots for the first time at the U.S. Embassy in Stockholm. In a ceremony on Wednesday, the Swedes received the U.S. Air Medal from U.S. Air Forces in Europe–Air Forces Africa for their deeds.

Noll was unable to attend the ceremony due to surgery.

“It was incredible,” Veltri said. “I’ve been looking for these guys for 30 years. It’s not often that you get to meet somebody who actually saved your life.”

Veltri and Noll were assigned in the mid-1980s to the 1st Strategic Reconnaissance Squadron, Detachment 4, at RAF Mildenhall in England. Back then, the SR-71 routinely gathered intelligence over international waters in the Baltic Sea. The top-secret missions were known as the “Baltic Express.”

Veltri said they collected reconnaissance against the Soviets and their military movements in Latvia, Lithuania, Estonia, Poland and Russia.

On that day more than 31 years ago, “what was normally routine became everything but routine when just seconds prior to making our turn back to the south ... the right engine blew up,” said Veltri, the aircraft’s reconnaissance systems operator.

At the time, they were at 80,000 feet flying at Mach 3. The aircraft rapidly descended to 25,000 feet. With the in-flight emergency under control, Noll and Veltri were able to make the turn south. But they were now traveling at a sluggish 437 mph.

Swedish help, Soviet shadows The SR-71’s defense “was high and fast,” Veltri said. The Blackbird’s nickname was “the lead sled, because without (one) engine, you just dropped like a rock,” he said.

As they dropped below the clouds, Veltri and Noll feared Soviet fighters would intercept and try to capture them.

The Soviets had already shot down an American U-2 spy plane in 1960 and taken its pilot, Francis Gary Powers. But they had never captured an SR-71. “They wanted the aircraft, to plagiarize the technology, but also as a propaganda tool,” Veltri said.

The two men decided if the Soviets showed up, “we weren’t going to give them the plane. We said as soon as we see a missile, we’ll bail out and ditch the aircraft in the Baltic,” he said.

They sent out a distress signal and hoped for the best. Their intended route was the narrow corridor of international airspace between Sweden and the country’s Gotland Island, the quickest and safest way out of the Baltic, Veltri said.

On its approach to Gotland Island, the Blackbird entered Swedish airspace, triggering a reaction by the Swedish air force. Fortunately for the Americans, a pair of Swedish Saab 37 Viggen jets already in the air for training were asked to intercept and identify the aircraft.

Neutral Sweden never joined the NATO alliance. Its fighters scrambled hundreds of times during the Cold War to intercept and identify aircraft near Swedish airspace from both NATO and the Warsaw Pact.

Retired Maj. Roger Moeller was one of two Viggen pilots to respond. Their flight controller told them “he’d like us to make an intercept of a very special, interesting aircraft,” Moeller said. “At the time, we didn’t know it was an SR-71.

“We went supersonic, to get in contact as soon as possible,” he said. “There we find him in clear skies” at about 25,000 feet. “We weren’t expecting that ... not that aircraft at that altitude.”

Moeller and his wingman, Maj. Krister Sjoberg, noticed the aircraft’s right engine had flamed out. They shadowed the Blackbird from about 100 feet out.

When the Swedes first appeared, Veltri said he and Noll at first couldn’t see their markings.

“When we realized they were Swedish Viggens, to say it was a relief would be an understatement,” Veltri said.

The Viggens had arrived in a nick of time. “Once they got on our left wing, it was only a matter of minutes that a (Soviet) MiG-25 pulled up a few miles to the left of the Viggens and hung on there for a few minutes” before departing, Veltri said.

Veltri said he and Noll found out later that the Soviets had launched 20 aircraft “hoping that the Swedes would have left our escort.” The Swedes never left the Americans’ side until they were safe.

A second pair of Viggens scrambled to relieve the first pair, which was running low on fuel. When Col. Lars-Erik Blad and Lt. Bo Ignell showed up, Moeller and Sjoberg returned to Sweden. Blad and Ignell then escorted the Blackbird to Denmark, a NATO member state.

“We had eyes on them all the time, until we left them close to Danish territory,” Blad said.

There, American F-15s from Germany took over and flew with the crippled SR-71 until it landed at Nordholz, in West Germany.

Finding friends Veltri, now 65, for years tried to find out the names of the Swedish pilots to give them some recognition.

The door opened when the mission was declassified. “I found out a little over a year ago that the pilots were still alive and living in Sweden.”

The Swedish pilots talked with Noll on the phone earlier in the week and spent time with Veltri, who attended the ceremony.

“We had a great time talking about old memories,” Moeller said.

Learning that they would receive honors from the U.S. Air Force was a great surprise, the pilots said. “I’m deeply honored,” Blad said.

Maj. Gen. John Williams, mobilization assistant to the commander, USAFE-AFAFRICA, presented the Air Medal to Moeller, Blad, Sjoberg, and Ignell, who have all long since retired.

“I think getting to hear this story that not a lot of people know about was very important,” Williams said.

The riveting tale also underscores the enduring ties between Sweden and the United States, he said, a partner to the north that “is very important to what we’re doing now in the region.”

Noll also had a chance to say thank you. He recorded a message for the pilots that was played during the ceremony.

“We will never know what would or could have happened, but because of you, there was no international incident,” he said. “The U.S. Air Force did not lose an irreplaceable aircraft, and two crew members’ lives were saved. Thank you for being highly skilled and dedicated patriotic fellow aviators.”