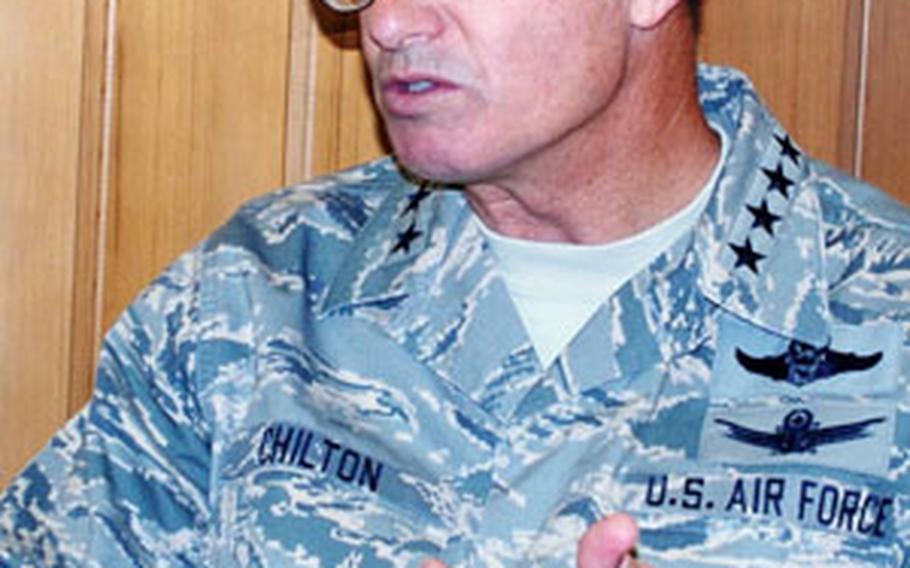 STUTTGART, Germany &#8212; When the space shuttle program was coming together in the late 1970s, Moscow feared the United States would use its manned spacecraft to fly into low orbit, pull alongside the Soviet Union&#8217;s satellites and steal them.

Things were so much simpler then.

The Cold War pitted two superpowers with nuclear warheads trained on each other &#8212; from submarines, from silos, from mobile launchers. One false move and the world was a fireball.

Ah, those were the days.

In the 21st century, however, outer space and nukes are the domains of many nations, led by a variety of order-givers &#8212; some who like the U.S. and some who don&#8217;t. The low-orbit satellites on which the world&#8217;s leading economies and militaries depend are within reach of rockets from China. Nuclear-aspirants such as Kim Jong Il and Mahmoud Ahmadinejad can now rattle sabers alongside President Bush and new Russian President Dmitry Medvedev.

Even though current battlefields employ much publicized micro-tactics such as firing mortars and setting off suicide bombs, global arenas such as the sky, space and cyberspace are being fought over, too, according to Air Force Gen. Kevin Chilton, commander of the Nebraska-based U.S. Strategic Command.

"There are a lot of asymmetric vulnerabilities in our mission areas that I worry about: space, cyberspace," said Chilton, a former space shuttle pilot. "And I worry about that terrorist whose stated claim is wanting to get his hands on a weapon of mass destruction and bring that to American soil."

Chilton advocates the furthering of a global missile-defense system to shoot down incoming nukes, and for improved oversight of the low-orbit satellite superhighway. As Ahmadinejad&#8217;s Iran test-fired missiles capable of striking Isael on Wednesday, Chilton had just finished talks with U.S. military leaders in Europe.

Running a worldwide missile-defense grid is complicated, Chilton said Tuesday in an interview with Stars and Stripes.

The military&#8217;s Stuttgart-based U.S. European Command, Colorado-based Northern Command and Honolulu-based Pacific Command all oversee parts of the world over which nukes might fly.

Some variables: Do you shoot down enemy missiles as they are blasting off, traveling through low orbit, or coming down toward a target? What happens when missiles fly from Pacific&#8217;s domain into Northern&#8217;s? Who tracks it? Who shoots it down? Who decides?

"How do you knit that all together so that you provide a seamless defense?" Chilton said. "And then, how do you plug that into the NATO countries&#8217; defense systems so that you have complementary systems there?"

Nuclear weapons might have faded from the popular consciousness, but some contend they are as relevant today as in the days of Ronald Reagan and Mikhail Gorbachev.

Still, it has been a long time since the U.S. has thought through the role played by nuclear weapons in its national security, according to Clark Murdock, senior adviser for the International Security Program at the Washington-based Center for Security and International Studies.

"It&#8217;s inconceivable to the American people that the United States would not be a nuclear power second to none, as long as other nations have nuclear weapons," said Murdock, a former Air Force and Pentagon strategist. "It&#8217;s part of our identity as a world global superpower.

"There is no question that one function nuclear weapons have had is that they have reduced the level of violence in major powers&#8217; conflict. Nuclear weapons kept the Cold War cold."

Others believe that nukes have largely drifted into the category of a cumbersome, outdated fact of life.

"Nuclear weapons have become irrelevant from a deterrent standpoint against anybody but other states that have nuclear weapons; we can&#8217;t make nuclear threats to Afghanistan," said George Perkovich, vice president for studies, global security and economic development at the Carnegie Endowment Institute for Peace.

The global nuclear game plan is married up to the hundreds of satellites that orbit hundreds of miles above the Earth.

Experts debate how much damage to the world&#8217;s communications capabilities, if any, could be inflicted by a missile, even a nuclear-tipped one, that struck a satellite or group of satellites.

But there&#8217;s no doubt that nations are capable of reaching them.

In January 2007 China successfully launched a land-based rocket that killed one of its weather satellites orbiting 530 miles above the Earth.

In February, a U.S. Navy ship in the Pacific launched a missile that destroyed a dead spy satellite at approximately 130 miles altitude as it tumbled back toward the Earth&#8217;s atmosphere.

Chilton said that the U.S. needs to be able to better keep an eye on satellites, space junk and nefarious activities in outer space.

"How can we improve our surveillance of space in the domains and in the altitudes and orbits where we have critical capability?" Chilton said.

"This serves two purposes. It ensures safe passage and safe operation of our capabilities up there, and by increasing the transparency and insight into that, we can deter bad behavior up there."