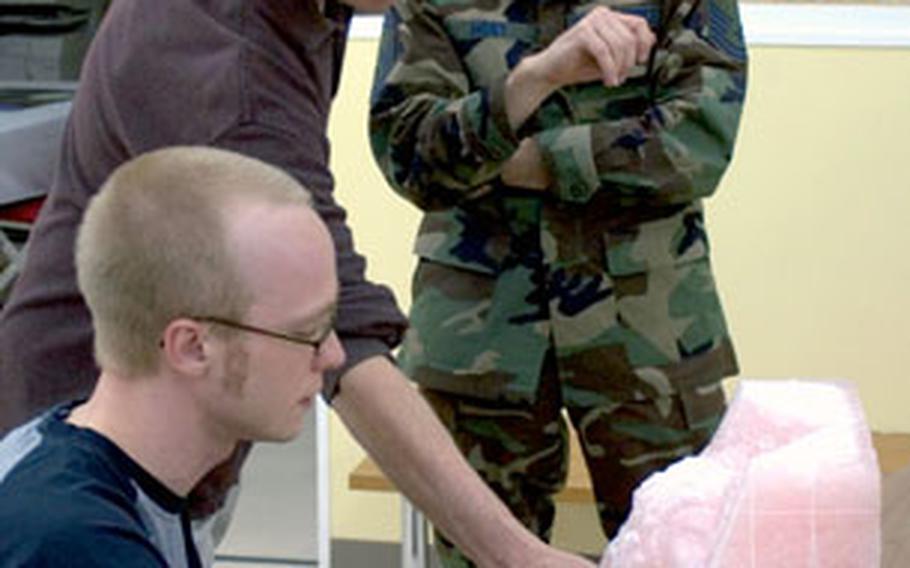 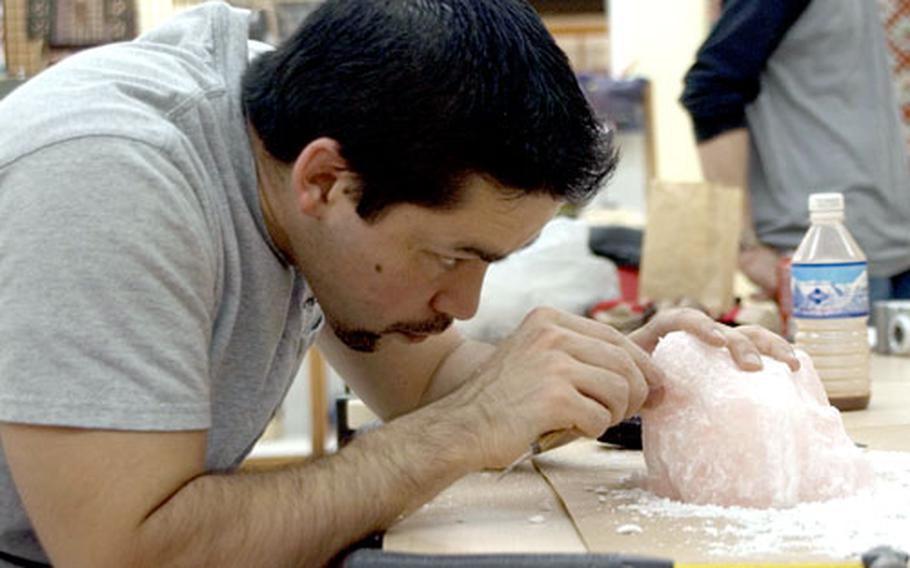 Ronald Miyashiro, a member of the U.S. Snow Sculpting Team, carves a section of the scale wax model of the sculpture the team will be creating during next year’s competitions. (Bryce S. Dubee / S&S)

YOKOTA AIR BASE, Japan &#8212; As winter sets in, many people choose to bundle up and stay inside where it is nice and warm. However, for the members of the U.S. Snow Sculpture Team, winter means it is time to get ready to compete.

Snow sculpting is a competition in which teams work within a set amount of time to carve giant blocks of densely packed snow into detailed sculptures.

Based out of Yokota Air Base, Japan, this year&#8217;s six-man team is preparing for the United States&#8217; 39th year of international competition. They will brave the elements, working 12-hour days in sub-zero temperatures to create frozen works of art.

The team will participate in two international competitions: the Harbin International Ice and Snow Sculpture Festival in Harbin, China, and the Sapporo Snow Festival in Sapporo, Japan.

Each year the team designs a new sculpture to carve in competition, said David Russo, the team&#8217;s organizer. Because they represent the United States, he said, they generally try to design something to show some element of American culture or heritage.

Past designs have included a log cabin, a bald eagle, a buffalo and the Twin Towers in New York City.

Before the competitions, the team creates a small-scale model of the sculpture to get a sense of how their final work will look.

In the past they have used sculpting clay to design the model. This year, however, they&#8217;re using a large block of wax.

&#8220;Unlike clay, where you sculpt the shape of your model, wax lets you see what you are carving away from the block,&#8221; said Ronald Miyashiro, one of the teammembers.

Fellow teammember Geoffrey Chandler agreed, adding that understanding how much wax/snow needs to be removed from the sculpture helps in its planning.

This is the first year that both Miyashiro and Chandler have been on the team.

Selected for their background in art, both said that this was a good opportunity to try something new.

Even with no background in snow sculpting, the artists on the team are valuable assets, said Russo, because they bring a different perspective when designing the sculpture.

This winter&#8217;s first competition for the team will take place in China during the second week of January. The team will be able to bring only four members and will have only three days to carve a 3.5-cubicmeter block of snow.

Their second competition will be at Sapporo in February, where a three-man team will have four days to carve a 3-cubic -meter block.

For more information and pictures from previous competitions check out the team&#8217;s Web site at www.ussnowsculptureteam.com.