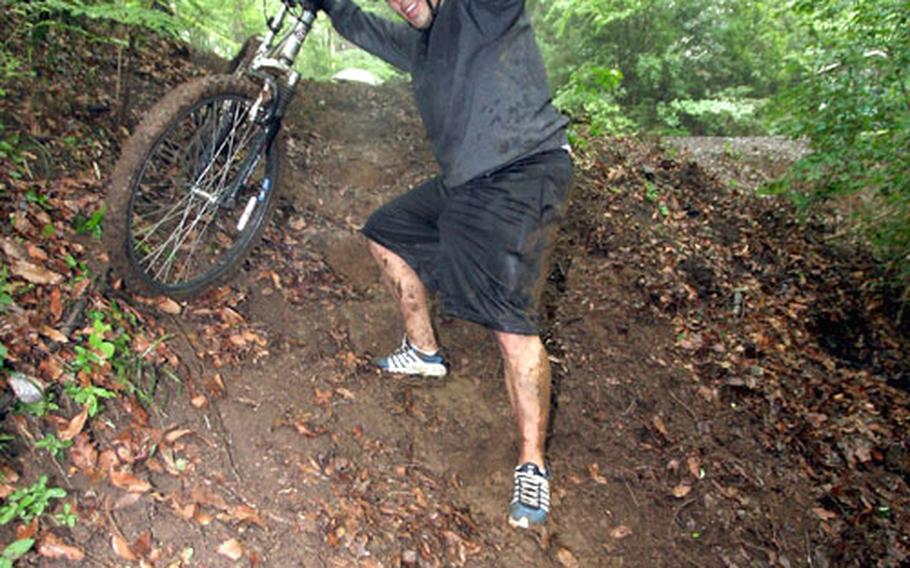 A competitor walks his bike down a treacherous part of the course during Saturday’s race after rain made the trail slippery. (Photos courtesy of Scott Champion)

A competitor walks his bike down a treacherous part of the course during Saturday’s race after rain made the trail slippery. (Photos courtesy of Scott Champion) 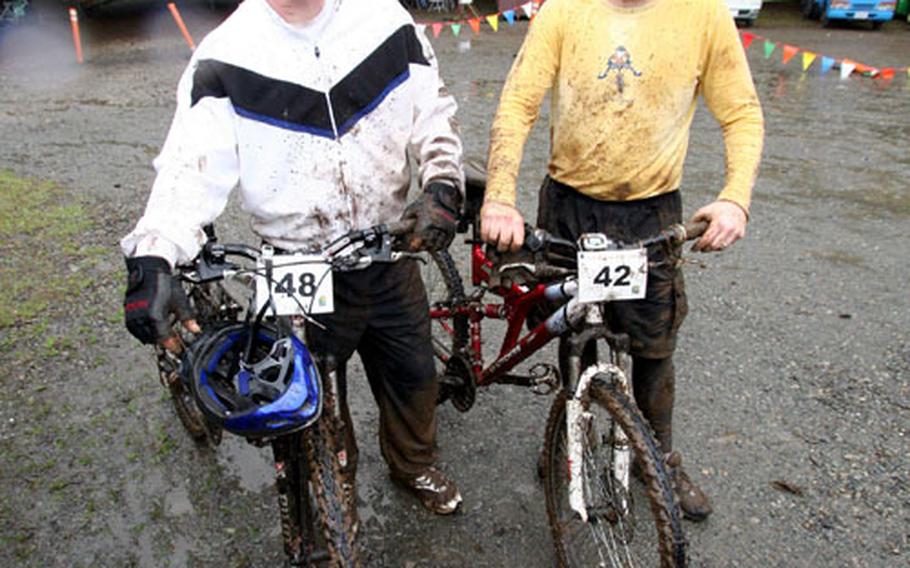 A cold, steady rain turned this rugged 5K course into a quagmire Saturday and made for treacherous climbs and descents in the 18th installment of the biannual Tour de Tama Mountain Bike Race. Still, 83 riders came out to brave the elements in five divisions: Expert, Men&#8217;s Open, Men&#8217;s Over 35, Women&#8217;s Open and Rookie.

Elsewhere, more than a few spills, mud-soaked gear all around, and some scraped knees, elbows and shins were racked up during the grueling race.

&#8220;It was a little bit scary,&#8221; said Jessica Ecker, who competed in the Rookie Division with her husband, Staff Sgt. Randy Ecker of the 730th Air Mobility Squadron. &#8220;We made the mistake of trying it before the race (in the morning practice run). That was good in a way because we got to see what was coming but we wore ourselves down.&#8221;

Expert riders normally lap the course four times, but sloppy conditions reduced their run to 15K on Saturday. All others circled it twice.

Several spots had to be negotiated by foot, as wheels simply were not an option after the track became increasingly loose from all the rain.

Tech. Sgt. Matt Arant, who works for U.S. Forces Japan at Yokota, was appearing in his eighth Tour de Tama. He ran into a tree stump during the Men&#8217;s Over 35 race and went tumbling over his handlebars.

His girlfriend, Shelley Fraser, won the Women&#8217;s Division despite having to overcome a wipeout of her own on that same harrowing stretch near the finish. The Australian woman took up mountain biking about 14 months ago, and Saturday&#8217;s race was only her second.

The Tour de Tama began in 1997 and is staged in both the spring and fall. A $25 entry fee included a T-shirt, door prizes and steak lunch provided by Tama Hills Lodge.

But as far as laundering all the mud-caked riding clothes, competitors were on their own.